Large numbers of Syrians and Turks are supporting theater work performed in Arabic in the southern Turkish province of Urfa, as artists strive to encourage a space for peace amid hatred and ignorance, Enabl Baladi reports 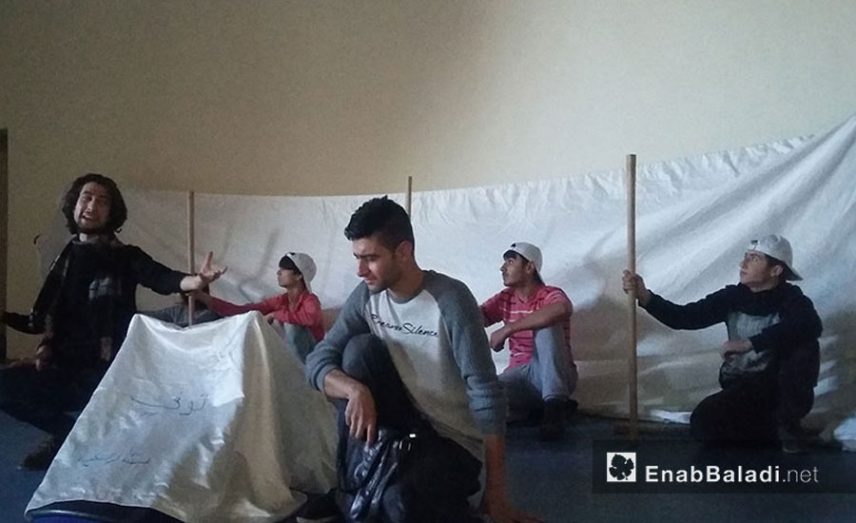 For more than three years, the Turkish province of Urfa has seen notable theater work with the participation of a large number of Syrian refugees.

A number of the Syrian artistic teams which have presented works of theater in Urfa have noted positive reception and appreciation among Syrians and Turks. Despite suffering from numerous difficulties, theater still enjoys a popular base in southern Turkey and audiences are eager to attend new performances.

Mohed al-Suttam, an actor and director, said that Syrian theater productions had seen the attendance of large numbers of Syrians and Turks, especially Arab Turks, who have not witnessed performances presented in their native language. However, he did admit that presenting Syrian work in Arabic was still a barrier to reaching most residents of the region, especially Kurds and Turks who do not speak Arabic.

According to Suttam, art needs to be “a space for rest and a haven for peace, and a cultural platform delivering ideas to people amid the desert of hatred and ignorance that surrounds them.”

The Last Dance… the latest production

The play “The Last Dance” was one of a number of Syrian plays performed several times, and will be entered into a national Turkish competition for theater. It was presented recently at the Sair Nabi theater in Urfa in cooperation with a number of Turkish youth agencies, and presented by the Saadallah Wanoos theater group.

In the play, two friends visit a graveyard to stay out late but they are shocked by the rise of the dead from their graves and begin to blame them for the situation the world has reached and the horrors the two friends have committed. The discussion continues between them amid an atmosphere of fear and terror.

Dalyar, one of the performers in The Last Dance, told Enab Baladi that the play was a “small picture of the life that Syrians are living now, while it embodies human suffering in general."