Young Syrians hide in fear of forced recruitment as the regime scrambles to replace its fallen soldiers on the fighting fronts, opposition outlet writes 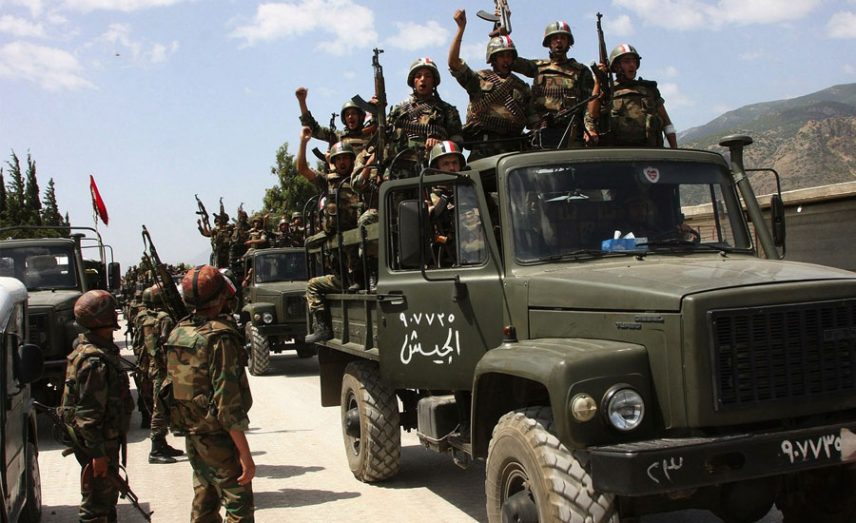 Every morning those young people who still remain in Syria wake up to a new terror: the terror of forced conscription.

Their days are now characterized by waiting, fearing the moment they will be arrested and sent to the fronts; evading, these Syrians register at universities to delay their deaths; and mocking those students who graduate successfully, because their success means the end of their postponement and their imminent deployment. They sell what they have and bear what they can so that some stranger can pocket it and families can delay sending their sons to the war for a few more months.

The president, who sees nothing of the country but the seat of power, surrounds them every day with a new decree, which narrows the chances to be saved. It does not concern him how they die or what they are dying for. Put very simply, he needs fuel for the battle for his survival.

Umm Suleiman, the mother of a young man who was drafted into compulsory military service and returned a martyr after less than a week, refused to remain silent and screamed until her voice reached everyone: “I will say everything inside me and I will not be silent after this moment. You people, my son went to the army, and after six days, he came back to me a martyr. He didn’t die during training or during some course. He died at the front. Is there a sane person in the world who sends someone from his home to the front immediately?”

Umm Suleiman continued: “His friend who he went with was injured. When I went to see him, he told me, ‘Auntie, the second day they gathered us together and asked who had been trained with the Russian rifle before? No one raised his hand. We were trained at school. There were some of us who had trained in youth camps or the university training camps. I swear to God auntie, they put us in transport trucks and took us for just one day to the shooting range and we shot the rifles. Then the next day they drove us in cars and pushed us into the battle immediately.’”

She concluded angrily, saying: “Is it at all reasonable that someone who may have shot four or five shots at a training camp gets sent to the front? May God deprive them of their children like they deprived me of my son.”

Fighting back tears, Umm Haitham, who also spoke with clear rage, as if fire had been kindled in her stomach, says: “I don’t know how we will protect our children. They’ve become under siege. They can’t go outside the house and they can’t go outside Syria. They don’t want to go to the war. There’s no solution. It’s as the proverb says, ‘There’s no land to swallow him and no sky to raise him.’”

The regime uses the conscription law as a permanent blackmail card, held over the necks of Syrians without mercy, which forces Syrians to submit to this blackmail in exchange for their lives.

Over the last few years, the Syrian regime has lost a large number of members of its army, and has nothing left but to throw forward more people to replace this manpower. For this reason, it has issued successive decrees on compulsory mobilization.

President Bashar al-Assad recently extended the age for compulsory service so that it now begins at 17 and extends up until 50. A little while ago, the conditions for academic postponement were narrowed, and so tens of thousands of young men have found themselves before the possibility of compulsory mobilization to the fronts.

An elderly person mockingly said: “Why does he bother himself with a new law every once in a while? Why don’t we have one law with one article saying, ‘Compulsory service extends from the cradle to the grave,’ so we can relax and he can relax?”

To remain away from the fronts, conscripts must pay numerous times in order to delay their mobilization.

Umm Hadi says: “I swear to God, I sold my house to delay my son’s military service. I paid the price for the postponement and now they want to take him to the army. What can I do?”

Hadi, who was sitting silently, listening to his mother’s grievances, suddenly breaks his silence, saying: “My brother, I know young people in every country on earth are thinking about their studies and are planning how to build their lives and their future. But us in Syria have nothing before us but death. My brother, I don’t want to kill anyone and I don’t want to die. God willing, this president will go to hell.”