All4Syria writes that despite claiming to protect Syria's minorities, for generations the Assad regime has targeted the Christian community and used its places of worship to fan the flames of sectarian tension 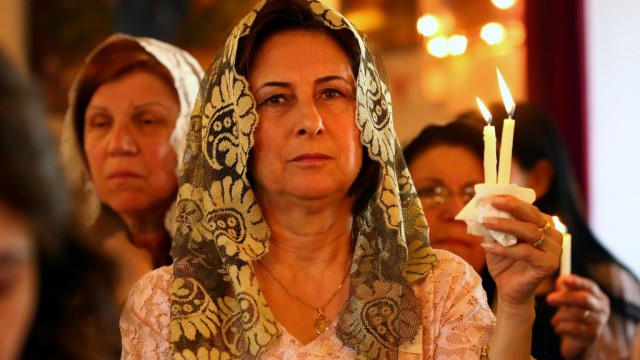 Throughout six years of the Syrian revolution, the Bashar al-Assad regime has distributed the missiles of its hatred, shabeeha paramilitaries and foreign militias, all over Syrian territory in order to wreak havoc and brandish their weapons in the faces of all those who oppose them. But as the levels of their crimes increased, the voices have risen higher and higher to say no — voices which are national cries from across the spectrum of the Syrian people who have been afflicted by killing, torture and arrest.

Supporters and followers of the regime insist on viewing the revolutionary movement from a sectarian viewpoint in one color, with an Islamic character, and avert their eyes from the participation of the other classes of the people in the revolution. None of them see the martyred photographer Bassil Shahada, the young Christian man who left university in America and returned to join the ranks of the revolution and who said: “A revolution is an entry ticket and not an exit ticket,” and whose family and friends in Damascus were then prevented from holding his funeral, as security forces raided the church in which it was held out of fear that a demonstration would break out after its conclusion.

Bassil Shahada was not the last Christian activist to be subjected to arbitrary arrest, and there are still many Christian activists suffering in the dungeons of the regime, including the lawyer and human rights defender Khalil Mattock, who was arrested by the regime for defending prisoners and whose fate remains unknown to this day. There was also Dr. Salam Maroush, from the city of Hama, known for his humanitarian work and performing his duties as a doctor for people in need, who was arrested by the regime in his public clinic in 2012 and remains missing until this day.

The U.K.-based Syrian Network for Human Rights issued a report in 2014 documenting the names of Christians held in Assad regime prisons since the start of the Syrian revolution in 2011. The report noted that there were 450 such prisoners being held by the regime, including 28 women and members of Christian political groups such as the Syriac Union Party, the Assyrian Democratic Organization, and leaders in opposition Syrian parties such as the People’s Party, as well as activists and lawyers in civil society institutions and aid workers. It documented many incidents of regime forces raiding political organizations and arresting members and destroying and looting the offices because of their participation in peaceful movements, most prominently the raid of the Assyrian Democratic Organization in the city of Qamishli and the arrest of its members in 2011.

Prior to the 2011 revolution, the late Syrian President Hafez al-Assad was no better in his treatment of dissenters. It is notable that the oldest Christian political prisoner in the Syrian intelligence prisons is Malaki Yousef Kouria from Hassakeh, who was captured by a Syrian intelligence patrol in Lebanon in 1978 according to the Assyrian Network for Human Rights. Kouria is still being held without trial and will likely spend his life in prison. The Assyrian Network noted in one of its reports that “Assyrian-Syriac prisoners are among the longest serving prisoners in Syria, and they have been arrested and captured by intelligence agencies and imprisoned without trial in violation of the Syrian constitution and international human rights law,” including Yacoub Hana Shmaoun, who has been imprisoned since 1985, and Fahmi Zaya Nanou, who has been imprisoned since 1991.

Christians as individuals have not been the only ones harmed, as their houses of worship and churches have been hit by Assad shelling across Syrian territory. According to a 2014 report issued by the Syrian Network for Human Rights, the Assad regime has struck 46 churches in several regions of Syria with direct bombardment, most prominently the Umm al-Zanar church in Homs and the Al-Qadisa Teqla church which was hit by bombing in Daraya and the Al-Azra church in Harasta.

As usual the regime has worked to inflame sectarian tensions among the communities of the Syrian people through the use of Christian houses of worship as military centers to bombard neighboring areas, according to the same report by the Syrian Network for Human Rights. These include the Cherubim Cathedral Church in Sednaya in the Damascus countryside, the new church in Jisr al-Shughour, the Latin Church in Deir-ez-Zor and the Umm Sharshouh Church in the northern Homs countryside, as well as the St. George Monastery in Hama's Maharda and the Wartan Monastery in the Midan district of Aleppo.

The Assad regime’s repression of Christian activists has not discouraged their participation in the Syrian revolution from the beginning, and a large number of Christian activists have become involved in the revolution in different Syrian provinces and participated in the activities of the peaceful movement and demonstrations despite the Christian sect being split between supporters and opponents of the revolution, like other Syrian communities.

A number of political parties, human rights and humanitarian groups and institutions in all fields — including the Assyrian Network for Human Rights and the Organization of Syrian Christians for Peace — have participated in support of the Syrian revolution, helping to refute the regime’s promotion of itself as a protector of ethnic minorities, while also working to reveal the true face of the regime in all its revolting sectarianism.