Human rights lawyer and former political prisoner says the fight against terrorism has become a cover for the powerful to hide their violations, All4Syria writes 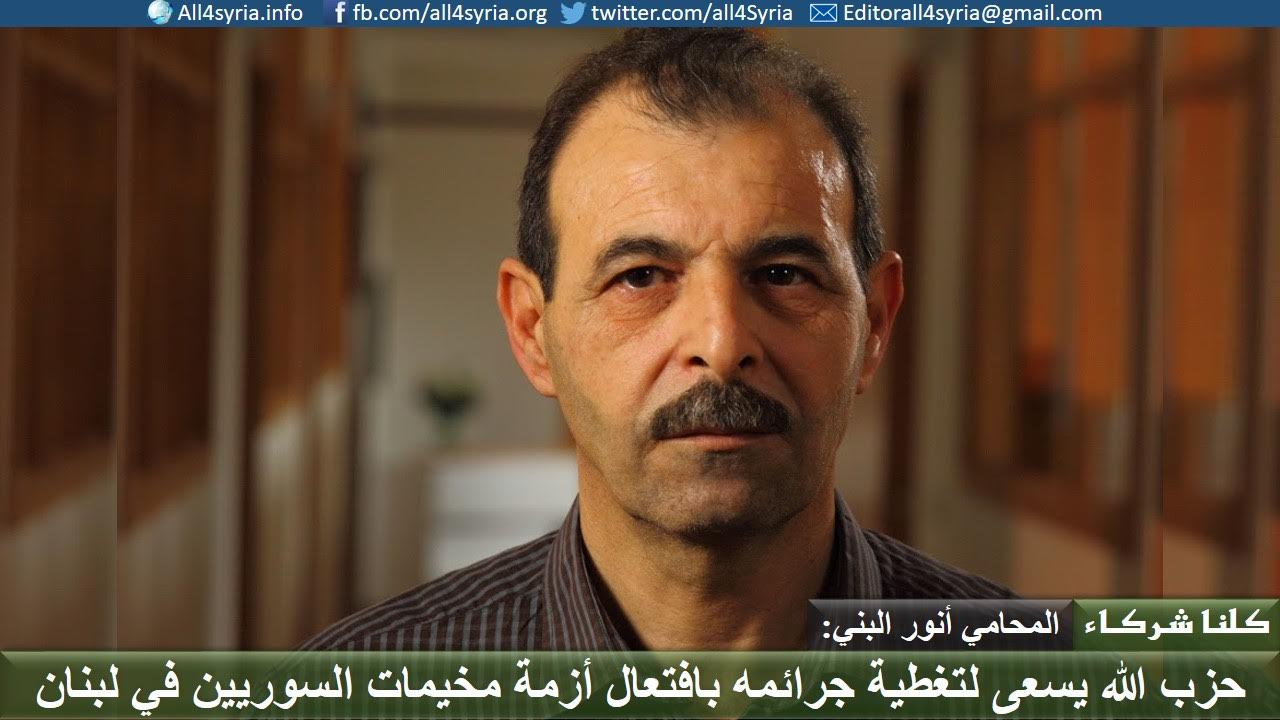 Human rights lawyer Anwar al-Bunni said that what was occurring in Lebanon against Syrian refugees was a crime in the interest of the Lebanese group Hezbollah, adding that the only tools to address the problem were international forces, which have displayed no desire to stop these violations.

Bunni, who heads the Syrian Center for Legal Studies and Research, said in an interview with All4Syria that Hezbollah wanted to instigate this issue to turn the world’s eyes to a crisis it created, and the refugee issue would conceal its crimes and the crisis which it has recently experienced, from being accused of terrorism to having its funds frozen. He added that the oppressive practices which Hezbollah is carrying out against refugees is not new, but the problem of the refugees in Lebanon is a barrier and a problem for Hezbollah, especially given that the biggest portion of the refugees in Lebanon are from border areas that Hezbollah is looking to control and impose its domination.

He said that the fight against terrorism had become a cover behind which governments and institutions were hiding their crimes, adding that hiding behind a counterterrorism operation was a crime itself.

In his interview with All4Syria, Bunni addressed the issue of the Syrian refugees in the neighboring countries and various parts of the world, and the regime’s role in displacement in loyalist and rebellious areas alike, as well as the Iranian role in displacement and demographic change.

Regarding the recent events in Lebanon and attacks against refugees, Bunni said: “What is happening against refugees in Lebanon is a crime. Lebanon’s problem is that it has not signed the refugee agreements and so considers that it has a right to expel them and consider them guests and visitors, and not refugees, who do not enjoy the rights stipulated in the refugee agreements which has prevented international groups from giving them aid.”

The Syrian Center for Legal Studies and Research issued a study in which it indicated that refugees during their flight over land and sea were subjected to various forms of pressure and abuses, exposing them to a state of constant fear and instability while pushing them to seek alternative places of refuge, meanwhile living in demanding conditions which affect them and the host community around them. They also face legal hurdles and various difficulties obtaining work, and as such most live under the poverty line with their situation worsening year after year.

The study presented statistics around the distribution of refugees and their numbers in the neighboring countries based on United Nations High Commissioner for Refugees documents. By 2016, the number of Syrian refugees who registered with the organization in various countries was as follows: