In rebel-held Daraa, a group of young men is trying to revive theater, Souriatna reports 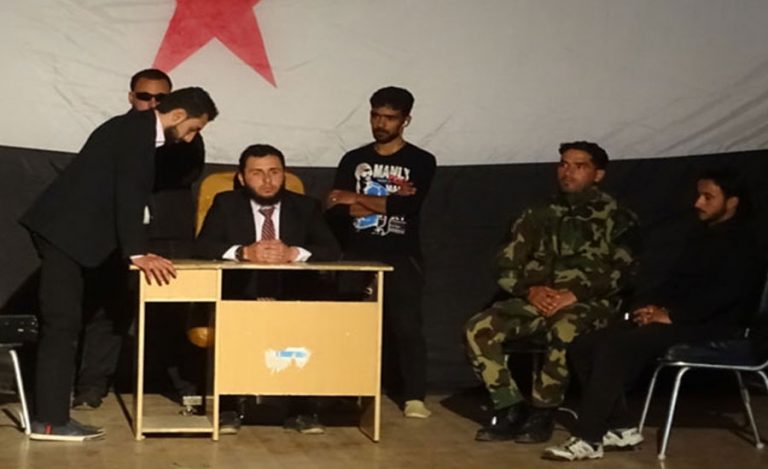 A young man from the city of Daraa has launched his first project to revive theater in southern Syria with the assistance of a group of other young talents, as well as several lighting, sound and scenography specialists.

The young man, called Mouayad Askar, specializes in composing, preparing and directing plays, which encouraged him to revive the theater scene and break the rules imposed on performances during the regime era.

According to Askar, the regime used to restrict theater productions that ran contrary to its political goals, leading it to ban a large number of plays in addition to criticizing and investigating many writers and directors.

Askar and his colleagues have worked to attract specialists and those interested in theater to form a comprehensive team specialized in acting, composition, setup, lighting and scenography.

Askar and his colleagues have presented several shows in the cultural center of Jassim, a town in the Daraa countryside. Although their work is on a voluntary basis and the youths’ own initiative, they have faced several difficulties, most prominently finding an appropriate location for training and performing daily rehearsals, in additional to other technical problems such as lighting and a lack of equipment.

Despite these difficulties, the team has tried to offer its theater performances at the lowest prices possible, hoping for support from the local authorities, since, Mouayad said, the shows have attracted audiences because of what they show of life’s bitter reality.

Alongside the theater, the team in Daraa is working to produce several short films. They have recently worked on producing a film titled “The Syrian Phoenix.” Despite the difficulties of producing films, which require more capacities, they are continuing their path to offer more theater shows and short films.