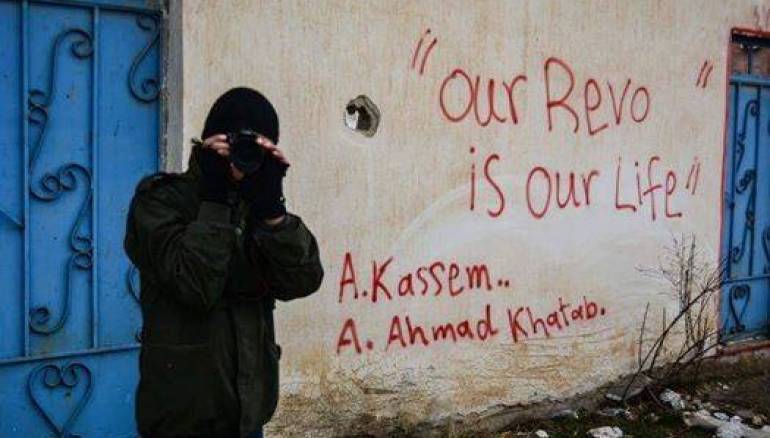 The Spring Revolution Rally in the town of Yalda, south of Damascus, on Friday held an art exhibition which was the first of its kind in the area.

The exhibition, entitled “Moments From Syria,” showcased photographs and artworks by youths from various parts of Syria. The one-day exhibition was held at the Yalda Civil Registry building in an effort to revitalize revolutionary activity.

According to activist Mohammad Abou Qasim, the exhibition presented 110 paintings and photographs captured by different Syrian artists in different cities and towns. The exhibition included work from prize-wining photographers such as activist Mohamad Badra and Hossam Qattan, and displayed caricatures from Ali Farzat and Hani Abbas.

The exhibition also presented images of siege, destruction, bombing, the work of the Syrian Civil Defense ambulances and rescue operations, as well as images of the Free Syrian Army.

The activist said that “this exhibition is the first of its kind in south Damascus and the town of Yalda specifically." He added that a similar exhibition was held in the Yarmouk Palestinian refugee camp three years ago.

Abou Qasim, a photographer and member of the Damashqi Lens media group, said he hoped that both civilians and activists would attend the exhibition, as the event is a new phenomenon which provokes curiosity. He added that the aim of the exhibition is to preserve the revolutionary spirit exhausted by the siege.

“The main reason for the limited duration of the exhibition is that there is no other place to show the exhibition except in the civil registry, which is closed on Friday,” explained Abou Qasim.

He added that most civilians and salon owners move around via the Bibla-Sayedi Meqdad checkpoint, so they fear being held accountable or arrested for organizing such exhibitions.

“Most owners of salons or other places prepared for setting up a show like this reject this type of [activity] because of the presence of the revolutionary flag, and on the basis the exhibition is anti-regime, especially as the areas have had a truce with the regime for three years,” Abou Qasim said.