As the international consensus leans increasingly toward Assad staying, will Syria's main opposition eventually get in line with its backers, Souriatna asks 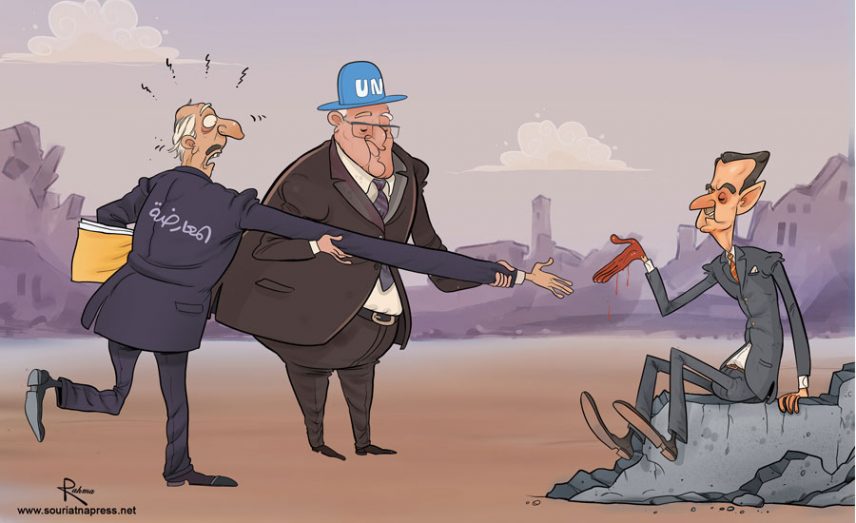 As the Assad regime recovers lost militarily ground in most strategic areas of Syria, foreign countries have reduced their support for opposition forces while Washington diplomats have urged opposition representatives at the Riyadh conference to reach an agreement that provides for President Bashar al-Assad remaining in power.

The opposition's Western and regional sponsors have recently begun promoting their own interest rather than achieving regime change in Damascus, followed by major changes in alliances and the ending of calls for Assad to step down.

The former American ambassador to Syria, Robert Ford, announced in August that there is no conceivable military alignment that’s going to be able to remove him, adding that “everyone, including the U.S., has recognized that Assad is staying.”

The de-escalation agreements, which were sponsored primarily by Russia, have contributed to stabilizing military battles at a reduced pace, despite escalations in some areas. Regime forces have taken control of the main cities, with only pockets in the north, east and south remaining to the Islamic State (ISIS) fighters, forces connected with Al-Qaeda, the Kurds backed by the United States, and the opposition groups.

With the approach of a new round of negotiations in Geneva, the High Negotiations Committee has been informed, even by its closest backers, that they risk wasting the negotiations time if they do not adapt to the new developments.

The Saudi Foreign Minister Adel al-Jubeir told the opposition in the Riyadh meeting that "the time has come to formulate a new vision," according to a meeting insider.

The Washington Post newspaper quoted an HNC member who asked not to be named as saying, “He didn’t explicitly say Bashar [al-Assad] is going to stay, but if you read between the lines, if you say there needs to be a new vision, what is the most contentious issue out there? It’s whether Bashar stays.”

In the Riyadh meeting, attempts were made to repair differences between the three main opposition platforms and to reach a united vision based on a new military and political reality. However, divisions have reappeared regarding Assad's fate, as the HNC said that there was no alternative to Assad leaving before any political transition.

Ahmed Ramadan, the spokesman for the opposition Syrian National Coalition, said: "We reject any role for Assad during a transitional period," while the group known as the Moscow platform insisted that Assad's departure not be a precondition for talks.

Discussion is currently taking place over restructuring the HNC, to give weight to the most conciliatory voices in the opposition ranks, which take the Cairo and Moscow platforms as bases, despite criticisms because of the clear and public relationship between these platforms and the Assad regime.

This comes as a result of heavy pressure placed by the United Nations envoy to Syria, Staffan de Mistura, who has spent most of the recent Geneva negotiations attempting to reconcile the representatives of the HNC and the Moscow and Cairo groups.

De Mistura seemed optimistic last week when he announced that these efforts will bear fruit, explaining that the opposition was in the midst of intensive internal discussions to reach a practical and more comprehensive approach to negotiations, expressing hope of desired results in the coming month.

These attempts reflect a change in the priorities of the most prominent opposition-backing countries, such as the United States, Turkey and the Kingdom of Saudi Arabia, which has now become more interested in maintaining its narrow strategic interests more than deposing Assad.

This seems clear from the focus of the U.S. on fighting the Islamic State (ISIS) and containing Iran's influence in Syria to protect its ally Israel, while the Saudis also want to contain their regional rival Iran, in addition to weakening the influence of Qatar, which is a supporter of the HNC and a number of armed opposition groups on the ground.

The Turkish priorities are to contain the Kurdish Democratic Union Party, which is backed by the United States, as Ankara fears what is happening in northeastern Syrian and Iraqi Kurdistan will inspire separatist dreams of Kurds in eastern Turkey.

In reality, these states have not threatened Assad's military hegemony, which has allowed Iran and Russia to control the game. It seems clear that Russian influence over the opposition is increasing to force the latter to negotiate with Moscow in the truce agreements and cease-fires in the besieged areas, while Russia attempts to convince the opposition to accept Assad remaining during a transitional period.