Kurdish figures tout the proposed meeting at the Russian airbase in Lattakia as a possible 'beginning of the end' to the Syrian crisis, loyalist Al-Akhbar writes 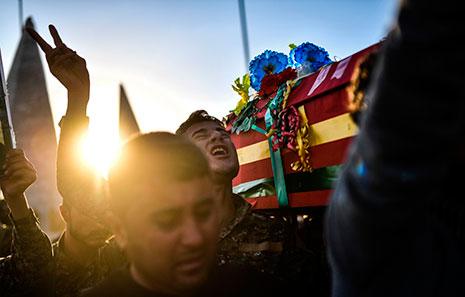 There are increasing positive signs regarding the expected twist in the Syrian-Kurdish issue. The course which Moscow is working on for a “historic” agreement between Damascus and the Kurds has seen over the last few days several practical steps. It is expected that these efforts will lead to an important meeting being held in the Russian Hemeymim military airbase, making it the second milestone after the trip carried out by a delegation of the Kurdish People’s Protection Units (YPG) to Moscow at the beginning of the month.

These steps are divided into two parts, the first of which is official and clear, with the issue discussed extensively during the Syrian Foreign Minister Walid al-Muallem’s visit to Russia a few days ago. Within this framework as well is a meeting held on Saturday by the Syrian Democratic Council (the political front of the Syrian Democratic Forces). The SDF spokesman Talal Salou told Al-Akhbar that “the meeting discussed the developments of the Russian efforts in light of the visit by Siban Hamou (the general leader of the People’s Protection Units) to Moscow.” Salou said that, “Moscow has sent invitations to some political parties and factions (five in number) within the Syrian council to be in Hemeymim to discuss Syria’s future, under Russian sponsorship.”

In parallel with the public meetings, there is a back channel, through which Moscow aims at bringing one or more representatives of the Kurdish National Council to the Hemeymim meeting, in an effort to allow the Kurdish delegation to enjoy greater representation. It is known that the KNC represents a Kurdish political segment allied with Ankara and is within the ranks of the opposition Syrian National Coalition. Al-Akhbar learned that Damascus is not only not objecting to this step, but actually enthusiastic about it.

Al-Akhbar has learnt that the secretary of the Kurdish Democratic Progressive Party in Syria, Abdel Hamid Darwish, will be present in this regard. Darwish is an experienced Kurdish political figure, and some see his political acumen as similar to that of the late Iraqi President Jalal Talabani. A breakthrough of this type, if it happens, would give the Hemeymim meeting new momentum, because the Kurdish National Council represents a different Kurdish spectrum than the ones represented by most Kurdish parties leading the scene inside Syria, such as the Democratic Union Party, the Left Party of Syrian Kurds, and the Kurdish Democratic Union Party. Al-Akhbar understands that the “Kurdish military spectrum inside Syria is interested in the success of Hemeymim and is optimistic about it, and is trying to support it in accordance with a greater representation formula, in contrast to the reservations of “some political leaders.”

Kurdish sources informed of the developments, say that “Siban Hamou’s recent trip to Moscow contributed to clear things up, including some sensitive issues such as that of oil areas.” At the same time, some voices inside the Self-Administration have stressed the need to “broaden the scope of the delegation to Hemeymim to include actors from outside the Kurdish community.”

Among these prominent voices is Fawza Youssef, the co-chair of the Executive Body of the Constituent Council of Democratic North-Syria Federation. The Kurdish politician Rizan Hadou told Al-Akhbar that “most indications say that we are preparing to write the final chapter of the Syrian crisis, and it seems that a serious and open discussion is opening between the Syrian government and Syrian Kurds, which is on the verge of being achieved.” Hadou, who is close to the YPG, says that “contradictions in the viewpoints around some preparatory details is natural, but it is clear that everyone agrees that dialogue is the only way to address what is happening in Syria.”

He adds that, “all the talk about partition was and will remain nothing more than a media ploy aiming to increase obstacles to dialogue. The success of the dialogue will lead necessarily to a transitional stage where all illegitimate powers exit, and it will thereby derail the project of cutting Syrian territory into parts.”