A lack of access to necessary treatment has prompted an already vulnerable community to face up to the realities of a drawn-out suffering, Saraj writes 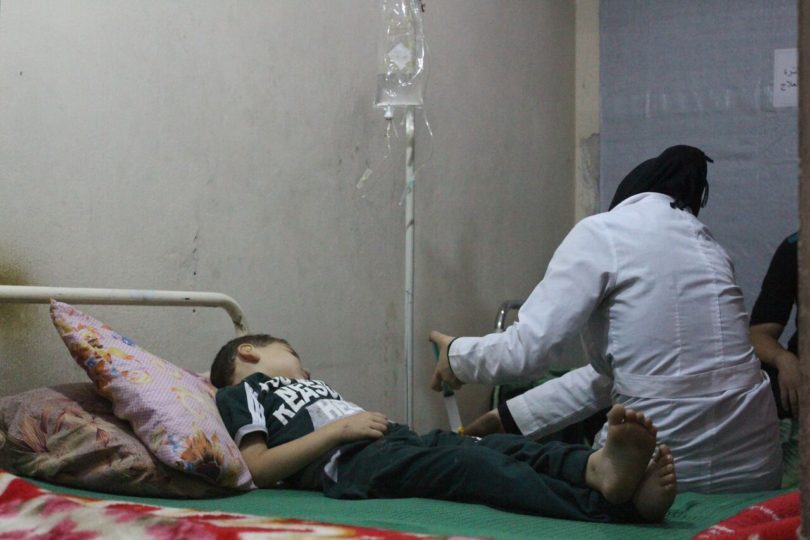 Mohamed wipes away his tears of grief and gathers the remaining medication from his desk inside a small bag. The doctor, who works at the Dar al-Rahma Center in the Eastern Ghouta, discusses the hundreds of patients suffering from cancer whose files have been stacked inside a wood cabinet in the center for months, waiting for treatment.

Just now, a woman in her 50s arrived to the center, which is the only one specialized to treat cancer patients. She is accompanied by a child not yet 5 years old, named Samer, who is among the 559 cases in the Ghouta, according to the center’s statistics. Like hundreds of others, Samer is awaiting medication which has dried up during the siege imposed by Syrian regime forces.

“The boy’s father has been imprisoned for about three years, while his mother has fled to Egypt. So he is left with me to look after,” says the older woman, who is his grandmother.

She adds that Samer “was complaining about pain in his stomach and legs, and when trying to treat him, the doctors discovered he had blood cancer. We started to treat him in the Dar al-Rahma, but today he is without treatment because of the lack of medicine.”

A siege on the Damascus Ghouta, which includes dozens of villages, towns and cities, and is home to about 400,000 civilians, has imposed a dire situation on cancer patients because of the almost total lack of treatment and the destruction of the hospital system.

In February 2017, Syrian regime forces and allied militias carried out an assault on the Al-Qaboun and Tishreen districts northeast of the capital Damascus, taking control of all the tunnels used to smuggle medicine and necessities from regime-controlled areas to besieged areas. As a result, the blockaded areas have been completely without an outlet, and cut off from the world for eight months. The lack of medicine and treatment is not only affecting children, but also the elderly and pregnant women.

Sara, a woman in her 20s from Douma, has received cancer treatment for about a year in the same center where Samer is treated. Having reached a late stage of treatment, she had begun to recover. But she is currently deprived of the necessary medicine as supplies at the center dry up, causing her health situation to worsen, according to a doctor at the Dar al-Rahma center.

Speaking in a soft voice, Sara said: “Despite the sureness that our fate is certain death, we cancer patients still had hope of living for a few more years. But the siege has deprived us of even this hope.”

Sara, like hundreds more living with cancer, are waiting for medicine while their files remain stacked up inside the Dar al-Rahma Center. Now these files are waiting a decision from the understaffed center, which employs just 3 percent of what it needs for these cases, according to the director of Dar al-Rahma, Wisam al-Roz.

Over the last three months, from among those who were receiving treatment, 20 cancer patients have died in the Dar al-Rahma center, which is about one person every five days. This included four children under 10 months old.

“With the shortage of supplies, the center has been rationing its limited medicine stock, while before the siege the center achieved a 37 percent treatment rate and saw just 10 percent deaths up to 2016,” the director Roz said.

The medical staff at the center said that patients who require radiation therapy were smuggling themselves to Damascus through tunnels to obtain care, which is only available in the Nuclear Medicine Hospital, while patients who are in need of chemotherapy were securing it from the capital in different ways.

“But today after the closing of the tunnels there is no opportunity for any of those being treated. The center today could be closed not for any material reasons but because of a lack of chemical medicine to treat the patients.”

According to a number of patients and aid workers in the Harasta and Douma areas, the impossibility of accessing medicine is because production and supply to Syria is controlled by the Syrian Health Ministry, which has prevented items from entering the Ghouta, while at the same time patients have not been allowed to leave to the Damascus hospitals for treatment.

The field doctor Bakr Abdelsalam said: “Since the closure of the tunnels, which were an underground lifeline for half a million people, the cancer medicine has been cut off, and today if they are provided at all, the prices are very high and the patients are not able to afford them.”

“Some of the medicine prices have reached more than $1,000, which is an amount that’s basically imaginary at the current time in the Eastern Ghouta, while its price is not more than a few Syrian pounds in Damascus,” he added.

When asked about the steps it was taking to stop the “disaster” which threatened hundreds of patients, the World Health Organization said it has officially requested the Syrian government to evacuate patients from the area in order for them to be treated either in Damascus or Idleb, based on their agreement.

The WHO has been offering a monthly report to the United Nations Security Council regarding the struggles to provide health and humanitarian aid to the besieged areas in difficult to reach parts of Syria.

According to the organization’s statements, 7 tons of medical supplies, medicine and equipment were sent through joint convoys with other aid agencies to the health facilities in the besieged areas, with the last shipment received on Oct. 30, 2017.

The most recent victim of the siege, Mohamad Ali Aseeda, died on Nov. 4 in the town of Hizza in the Eastern Ghouta after his health situation deteriorated due to bowel cancer and the lack of necessary medicines.

The continuing blockade by the Assad regime represents a breach of one of the main items in the agreement, and a clear violation of this agreement, which should have reduced the suffering of civilians, foremost medical patients.

Human Rights Watch confirmed in its 2016 annual report that the Syrian government has continued to require humanitarian agencies to enter into a bureaucratic approval system in order to obtain permissions before accessing these areas. This has worked to worsen the conditions and increase casualties inside many areas facing siege inside Syria.

But amid an absence of mechanisms to pressure countries involved in the conflict, there is currently no choice for the U.N. teams in Damascus but to appeal for help in overcoming the obstacles, and issue reports documenting the most terrible scenes of the siege and the daily cases of civilian deaths. Meanwhile, 350,000 people await their unknown fate in the Ghouta and 559 patients await a slow death.