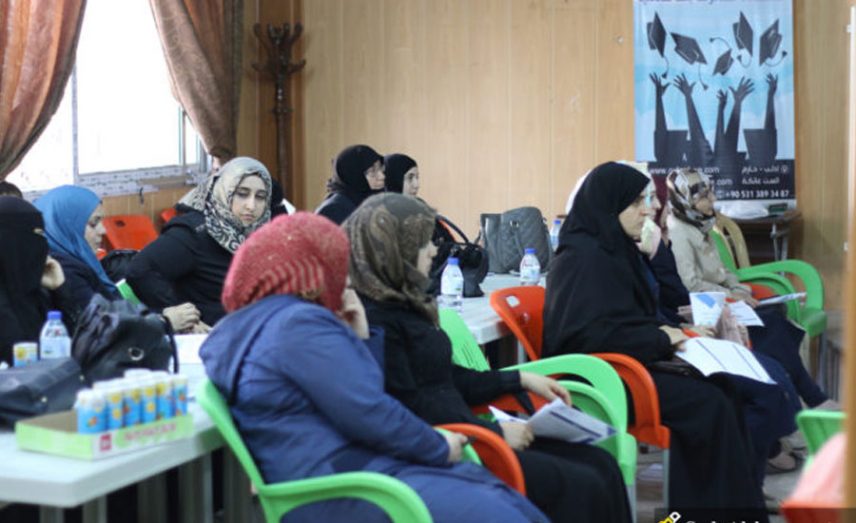 It had not entered into Yamama Asaad’s mind that she would one day enter the field of media. The 39-year-old mother of two had not thought that today she would gain all the skills she now has. At that time, she was just an active employee in the Technical Services Directorate in the city of Idleb.

Asaad recalled the 15 years of her previous employment by the state, saying: “After I graduated from the engineering academy, I was hired in the Technical Services in Idleb to work on various projects. But my constant desire to develop myself pushed me to take various courses in English and specialized computer programs, which improved the quality of my work during the last years of my employment. My husband was also a civil servant, and our life was relatively stable, financially and socially.”

With the beginning of the Syrian revolution in 2011, Asaad was determined to continue her work, despite the difficulties that resulted from the poor security situation affecting all the rebellious area, including Idleb. But her life was turned upside down after the liberation of the city at the end of March 2015.

“That period was one of the hardest for the residents of Idleb,” Asaad says. “Despite the great joy at the full liberation of the city from the regime’s grasp, the area was heavily and continuously bombed, forcing residents to flee their homes. This is what I was also forced to do. I fled with my family to the village of Ahsam in the Jabal al-Zawiya and, even there, things were no easier than in Idleb, as it was bombed with the same intensity.”

Asaad continues: “At that time I entered a very negative psychological state as a result of the difficult conditions, which were increased by leaving my work and cutting off my source of income. This forced us to pass through a stage of poverty, need and frustration.”

Here, Asaad’s voice changes to reflect the internal strength she had to move toward a new life: “I am not one of those who gives in to inability and submits to despair, and so at that time I resorted to studying and memorizing the Quran, which is what gave me back the interest in pursuing my life. I decided, after I saw the horrible massacre in the market in Ahsam, to go back to my home in Idleb and to confront the fear to continue my life and search for a new beginning. First were my studies at the Islamic Fiqh University in the light of the Quran and the Sunnah over the internet. I obtained many certificates in religious texts through online courses as well.”

“After that I took part in various courses set up by organizations working on women’s empowerment in liberated Idleb, including courses in mental maps, reading, human development, and personality types,” she said.

Asaad continues: “These workshops helped me understand my personality and to develop it and change what was hurting me previously. But what led to a real qualitative shift was the course on media activities inside Syria, arranged by a French organization in a Syrian media center. That was the first step in my new path which I find myself on today, through which I was able to take stages for my future life.”