Failure of the opposition to halt Assad’s forces amid constant internal strife has affected the extent of its popular support and resulted in backlash, Enab Baladi writes 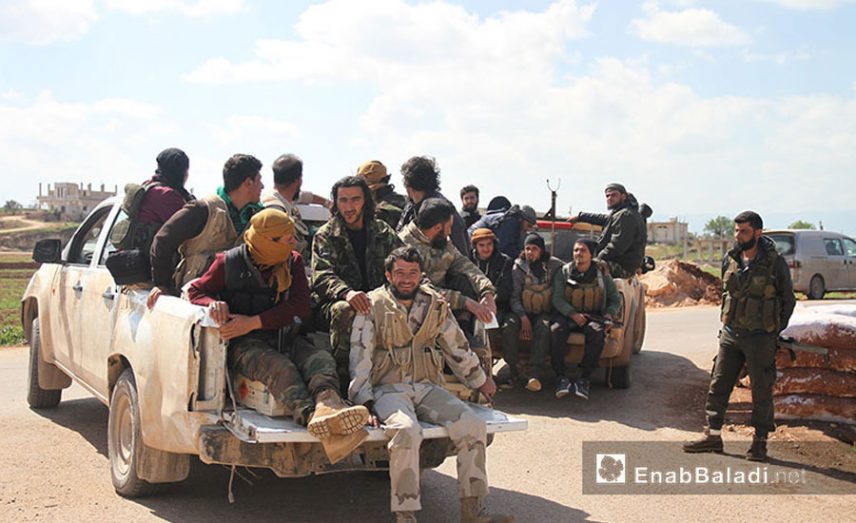 The armed opposition in the southeastern countryside of Idleb province is witnessing a battle of attrition after President Bashar al-Assad’s forces, backed by allied militias, reached the outskirts of the Abu al-Duhur military air base. Meanwhile, rebels are trying to retake the reins of military affairs and direct them in their interests in military attacks, seen by much of their popular base as insufficient to change the reality on the ground.

As of Jan. 13, Hay’at Tahrir al-Sham (HTS) had regained the two villages of Talab and Al-Dabshiya south of the air base and north of the strategic town of Sinjar after days-long battles in its surrounding areas. Meanwhile, the Free Syrian Army groups returned to their attempts to regain control over territory from the direction of the eastern Hama countryside.

The opposition took control of Al-Khariba, Rabia and Mashrifa after launching the battle “Repulse the Tyrant” on the 11th of this month. The campaign allowed the rebels to advance and take control of a number of strategic villages, only to lose them again within hours, after betting on the possibility of pressuring Assad’s forces and forcing them to withdraw from the air base vicinity out of fear of falling under siege in a pocket to its south.

The battles saw the use of Turkish armored vehicles for the first time, according to images published by the Faylaq al-Sham rebel group. Military sources from the group told Enab Baladi that five Turkish vehicles had been used in the battle which the Faylaq had received about five months ago.

According to military sources, the opposition has gambled on the withdraw of regime fighters by “striking the side of Assad’s forces and skirmishing on the outskirts of the air base to put it in a state of confusion and force a withdrawal from its environs,” relying on the “weak fortifications of Assad’s forces of the villages previously lost by the rebel groups.”

Enab Baladi documented the deaths of dozens from Assad’s forces, including officers, most prominently the leader of the Radad Brigade in the Fifth Corps, Col. Ezzedin al-Munhadar, and Col. Mahmoud Maatouk.

In the midst of fighting in the region, the Islamic State (ISIS) organization announced it had captured Assad forces fighters in the Abu al-Duhur area, showing them in a video recording broadcast by the group’s Amaq news agency, followed by announcement of new dead and captured east of the air base on Saturday, Jan. 13, after it passed the village of Tarfawi at the expense of HTS, advancing about 15 kilometers from the air base.

Fronts from the southern Aleppo countryside

Assad’s forces opened two new fronts in the southern Aleppo countryside on Jan. 12 toward the Abu al-Duhur air base from the east, and took control of a number of villages from the Khanasar area up to the village of Umm al-Amad alongside a second axis from the southern countryside toward the city of Al-Safira.

The forces are trying to besiege rebel-controlled areas in more than 20 villages in the eastern Hama countryside in an area of about 125 square kilometers to the east of points controlled by ISIS, divided by a few kilometers as of Jan. 13.

The military tactic adopted by the opposition seemed successful at the beginning of the battle, however military analysts indicated the difficulty of besieging Assad’s forces in the area, which places the opposition before a challenge to the possibility of tipping the scales of the battle in its favor, amid accusations from Syrians that it is “carrying out agendas of the countries it is loyal to.”

Has the opposition lost its popular base?

The notable military decline and the failure of the opposition to halt the advance of Assad’s forces, coinciding with a near-permanent internal conflict between rebel groups at the expense of others, has affected the opinion of the popular base and resulted in a backlash against them in the villages which have seen internal conflicts, with HTS a main component in most of them.

Activist Khalil al-Sameh told Enab Baladi that the obstacles and crises the revolution is enduring, alongside the rebel groups ignoring the concerns of locals, has impacted relations between civilians and the armed opposition. He added that “withdrawals and so on that may be outside the control of the groups have contributed significantly to the people’s alienation and their constant blame in light of the continuing mistakes.”

Kamal Abu al-Majid, a military commander in Ahrar al-Sham, said that “we have come to see fighting between the rebel groups which claim to protect residents from the regime’s brutality, in an effort to impose influence on liberated areas and exploit people’s resources and ruling by strength. The issue has come to include intervention in civilian and education affairs, while some who distance themselves from that do not hide their allegiance to foreign countries and their implementation of agendas at the people’s expense.”