Moscow's actions in the Ghouta – military and political – should be seen as a strengthening of its position independent of the fate of Assad, Enab Baladi writes 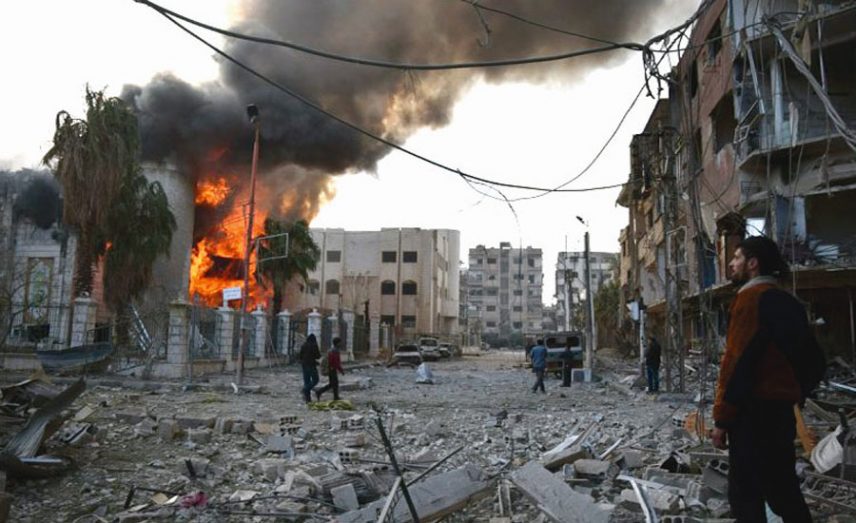 The conditions endured in the Eastern Ghouta of Damascus resemble those which the city of Aleppo saw at the end of 2016, especially in the way it has been subjected to military escalation, from the heavy air cover to the talk about humanitarian corridors under Assad forces control to evacuate civilians. But the point of difference between the two is the weight of the Ghouta as the last stronghold of opposition forces around Damascus, and the main obstacle to Russian influence in Syria and its capital.

More than 450 civilians have been killed in six days, with airstrikes affecting all the Ghouta’s cities amid a deterioration in living conditions for residents, whose daily lives have become confined to ground shelters. Some of these dwellings are unprotected because they are not immune to the seismic missiles that can penetrate more than a story into a building, according to civilians speaking to Enab Baladi.

In the first days of 2018, the Russian military announced that its main mission was to destroy the Nusra Front (included in Hay’at Tahrir al-Sham), some of whose fighters were in the “de-escalation zones.” According to Moscow, this is what it is currently trying to achieve in the Ghouta. Yet this is clearly not the case, as no more than 200 Nusra fighters are positioned in the eastern Damascus countryside.

However, in light of what the last few days have witnessed since the start of February, Russian aims in the Ghouta are not limited to military action. There has been an escalation of political indicators through which the Russians want to achieve a victory after the failure of the Syrian National Dialogue Conference in Sochi, followed by the return of the Americans to entrench their presence in the areas they have recently taken.

According to a member of the opposition’s Astana delegation, Ayman al-Assmi, Russian aims in the Ghouta are both military and political. He said that Moscow sees the political aim as more important, as it wants to achieve a political victory through “cleaning” the areas around Damascus. This was supported by the agreement south of Damascus to remove Hay’at Tahrir al-Sham fighters to northern Syria, coinciding with military operations against the Ghouta.

Based on that, the Syrian regime, which is backed by Russia, began operations to secure a belt around the capital, especially on the eastern flank, which has been subject to the greatest threat. Surprisingly though, the Iranian role has been distanced from the plan, unlike in other areas such as Daraya in the western Damascus countryside and up to Mazraa Beit Jenn.

However, according to Assmi, Iran has not been entirely excluded from the escalations. He told Enab Baladi that the Ghouta was one of the battles which will contribute to imposing a political solution and a continuation of a campaign of escalation. He said this should be understood as a strengthening of the Russian and Iranian position independent of the fate of President Bashar al-Assad, which will be decided in the days following the imposition of the Russian vision in Syria.

Iran’s satisfaction in the south

Elsewhere, Tehran’s role cannot be ignored in the capital’s environs as well, as evidenced by its repeated attempts to expand influence in central Syria — especially in the first years of the revolution.

Over the past four months there has been talk about regional countries curbing Iran’s role in Syria, especially the Israelis on the southern border. The latest agreement between Russia and Turkey in Idleb has also halted the Iranian dream of reaching the areas of Kefraya and Foua.

Wael al-Khalidi, a Syrian journalist and opposition figure, said that the military escalation in the Ghouta is Russia’s attempt to appease Iran in the south, as it is serving its interests cordially and has no problem with that. He said that the Russians are compensating Iran for what it did in the south, the way it compensated Turkey in the north provided it remains within Russian interests in Syria.

Khalidi told Enab Baladi that the Sochi conference had nothing to do with events in the Ghouta, and that Russia had organized its operation legally with approval from U.N. envoy to Syria Staffan de Mistura.

He added: “The issue is currently related to Iranian-Russian relations and the continuing support for the Iranian project in Damascus and its countryside.”

In a statement on Feb. 23, rebel groups called on countries to activate the principle of "Responsibility to Protect" (R2P), which was approved by the United Nations in 2005, to halt the “pattern of extermination, crimes against humanity and war crimes which are being carried out in the Ghouta.”

The message placed full legal blame on Russia and Iran, “as they are the two aggressor parties against Syrians in carrying out war crimes.” It demanded that officials of the two countries be prosecuted by an international criminal court, while attributing responsibility to the governments of Iraq and Lebanon, “since they are responsible for the actions of militias killing Syrians.”