Fierce infighting between the factions will not be resolved easily, Souriatna writes, and other rebel groups are steering well clear of the conflict 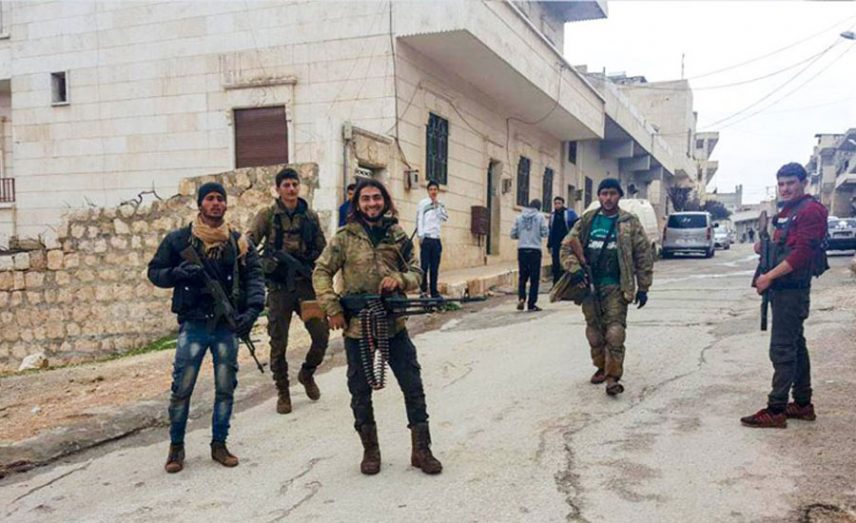 Confrontations between the Jabhat Tahrir Suria (Syria Liberation Front) and Hay'at Tahrir al-Sham (HTS) in northern Syria entered their second week amid a back-and-forth battle between the two sides.

The combatants are trading control over wide swaths of the areas in which the battles are focused in the Idleb and Aleppo countrysides, a fact which confirms the validity of expectations which have been discussed since the beginning of a difficult war in which neither side can gain a decisive victory quickly.

HTS, which is led by Abu Mohamad al-Jolani, accused Jabhat Tahrir Suria, which was recently formed from a coalition of the Nureddin al-Zinki and Ahrar al-Sham movements, of forming assassination cells from members of Jaish al-Thuwar, who defected and reached areas under Zinki control, and then tasking these cells with eliminating HTS commanders and staff.

The other side denies this and says that Jolani and those with him in the group’s leadership want to kill Jabhat Tahrir Suria’s project in the cradle and prevent any powerful faction from restoring the balance in the north, which HTS has almost totally dominated since it inflicted a defeat on Ahrar al-Sham in mid-2016.

The surprise was only in the speed with which they decided to enter into this battle, reflected in the tools that each camp used over the seven days of the military operation, in which the two sides have appeared unready and poorly planned.

Both were forced to carry out attacks or to redeploy indiscriminately or quickly, and to rush to achieve quick victories which would have media resonance and psychological effects, rather than organized, strategic operations, with the exception of the performance of the Saqour al-Sham Brigade, which has fought strongly in battle on the side of Jabhat Tahrir Suria and achieved significant victories to a large extent in the Jabal Zawiya areas in the Idleb countryside.

The details reveal the extent of fear gripping HTS leaders over any military or political project in which the Zinki movement is a party, as the group has managed since its foundation at the end of 2011 to impose itself as a powerful, organized and flexible player in the Syrian equation.

Zinki's influence is seen especially on the map of rebel groups, where everyone, including Hay'at Tahrir al-Sham, consider it the only faction able to confront the group and to curb its aim of taking control over northern Syria – indeed, even defeating the Jolani-led organization, which is no less flexible and intelligent than the Zinki movement. This is the source of conflict and severe hostility between the two sides.

Immediately after the start of the fighting between the two sides, and since the first day, it has become clear how hard it would be to resolve it in favor of any party. Despite the tense relationship between each and the ideological and political environment to which it belongs, both Zinki and HTS have begun a major campaign to seduce the other factions to fight on its side, which has met with very limited acceptance.

The Zinki movement is considered the main force able to fight HTS because of the severe weakness of the Ahrar al-Sham movement. This weakness appears clear even in recent battles, where nearly all the areas which HTS has taken from Jabhat Tahrir Suria were under the control of this group, which was not able to attract any faction to fight alongside it with the exception of Saqour al-Sham, despite the explicit calls which Jabhat Tahrir Suria made to other factions, led by Faylaq al-Sham, which decided along with a number of Free Syrian Army powers to remain neutral.

The lack of other groups' response to these calls or to go into battle alongside the Jabhat Tahrir Suria despite their own disputes with HTS and the lack of clarity of who will come out victorious has strengthened fears about Hay'at Tahrir al-Sham taking revenge if it is able to decide the war in its favor, making this a reason that can be integrated into the context of explaining this position.

It is not possible to ignore the uneasiness which all FSA and local Islamist forces opposed to the jihadi groups feel toward the Zinki movement, whose leaders are broadly accused of trying to dominate the Islamist, national and military opposition groups.

As many see it, the movement and its leader, Tawfiq Shehab, have an old strategic project they are still working to achieve despite facing many difficulties and obstacles, which is the project of joining rebel groups into a single military organization under its leadership.

The period between 2016 and 2017 saw the peak of convergence between the Zinki movement and HTS, remembered by other groups as a black stain difficult to erase, even if there were justifications from Zinki which could be accepted about this stage, in which it witnessed, supported and even participated in Hay'at Tahrir al-Sham’s attacks on FSA groups at the time.

The same issue applies roughly to Ahrar al-Sham, which the FSA preserves several bitter memories of, specifically with regards to its ever-lax positions about every attack carried out against them by HTS in its various permutations since 2014.

According to the map of relationships which connects each of these fronts, any prolongation of the conflict will be a loss for both sides, which will not find, based on all the previous information, those to stand alongside them in these battles, as other groups, even those close to them ideologically and politically, believe both aim to achieve domination over the north and hegemony over all the other groups.

However, a quick resolution to the battle does not seem possible with any ease, which is what the commanders of the two sides believe, leading them to focus, according to this conclusion, on fragmenting their rival from the inside.

In fact, this soft battle could determine the conflict more than a military battle.