Both sides benefiting from turning a blind eye and imposing customs fees on goods crossing between areas of their control, Sada al-Sham reports 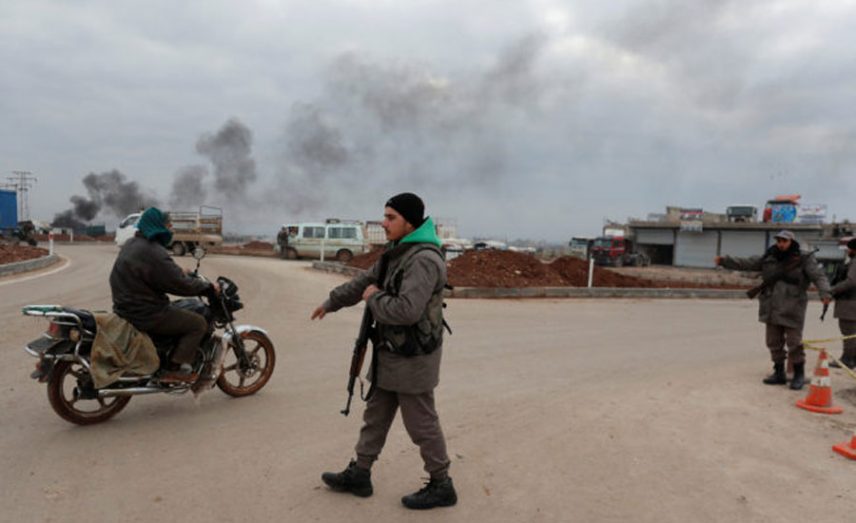 Some of the points separating regime- and opposition-controlled areas across Syria have turned into unofficial commercial crossings in which both sides are achieving specific economic interests.

These points are overseen by the regime, its militias and security members on one side, and by members of the Free Syrian Army and Hay'at Tahrir al-Sham on the other.

Within the nearly secret agreements between the two sides, the regime works to turn a blind eye to the road to these crossings, by clearing some of these routes of inspection checkpoints or giving orders to ignore suspicious behavior – instructing these checkpoints to let goods pass to and from the crossings. The rebel groups likewise work on facilitating the travel of trucks to and from the border crossing which connects their areas with regime ones.

Among the most important of these roads and economic routes, which are the biggest smuggling routes between Turkey and Syria in general, is the route between Hama and Idleb. This crossing sees the largest daily commercial traffic between the two sides, with dozens of loads crossing both ways.

An activist in Hama, who asked not to be named for security reasons, says that communication between Hama and opposition areas is done through commercial routes through which the two sides exchange commercial interests. Among the most important of these routes has been the Hama-Abu Dali road.

The village of Abu Dali lies in the eastern Hama countryside and had been controlled by tribes loyal to the regime under the authority of MP Ahmed Darwish. However, after the recent rebel advance in this area, the activity on this road has stopped completely.

The Abu Dali crossing had served as a major commercial line for smugglers and traders from the cities of Hama and Idleb, as there were few regime checkpoints along the road between Hama and the crossing. The activist told Sada al-Sham that “these checkpoints work under the guidance of the regime and do not stop any load or goods passing through the crossing to the Idleb countryside. The same is the case for the opposition checkpoints, which facilitate the arrival of commercial goods to Idleb.”

Among the other important crossings through which there has been traffic, especially since the Abu Dali crossing was blocked, is the Qalat al-Madiq road, which is at the entrance to Sahel al-Ghab, west of Hama city, adjacent to Jabal Shashabo, which extends toward Jabal Zawiya in the Idleb countryside. This road is a crossing to the loyalist regime areas, and is under the control of the opposition.

Abu Hani, a trader from the Hama countryside who transports goods through this crossing, says that many foodstuffs, spare parts, paints and wood panels are transported from Hama city to the Idleb countryside through this route. This route is easy to transport goods across without questioning from the regime, and so it is easy to move goods to opposition areas from Jabal Zawiya to Idleb city.

“Moving goods between opposition and regime areas benefits both sides, and they find themselves compelled to accept goods transported between them,” says Abu Hassan, a trader from Idleb city, adding that selling and buying and commercial and economic activity in Idleb has a major benefit for the opposition and is a source of funding for it.

Rebel groups have imposed customs fees on goods imported from regime areas and likewise on those they export there, even if they are of Turkish origin. These fees include protecting goods from the moment they enter into opposition areas until they reach their destination. The customs fee is calculated according to the weight of the goods and their type, and this is overseen by a specialized committee of groups supervising the crossing, and the profits of this crossing go to the groups themselves.

The regime does the same thing. After customs fees are imposed by the opposition, the other side begins imposing fees on Turkish goods and those imported from opposition areas.

These fees do not include protection after entering regime areas, as after passing through regime checkpoints to Hama and other provinces the goods are subjected to dozens of fees and extortions in order to facilitate their crossing, in addition to the fees necessary to pay members of patrols that accompany these goods.

On top of this there is a fee to be paid at each Fourth Division checkpoint, which oversee most of the commercial routes, especially in Hama, Homs and the Syrian coast. However, these fees at the same time include help avoid being prosecuted and investigated by the customs authority in Hama and the goods being confiscated.

From an economic standpoint, the import and export over these Syrian-Syrian crossings brings the regime great benefits, including the export of local products to opposition areas and then to Turkey, especially as the regime markets, with the Syrian revolution entering its seventh year, no longer have large quantities of locally made products due to the weakness of the Syrian economy, while the exchange rate has also raised the price of the Syrian pound compared to the American dollar.