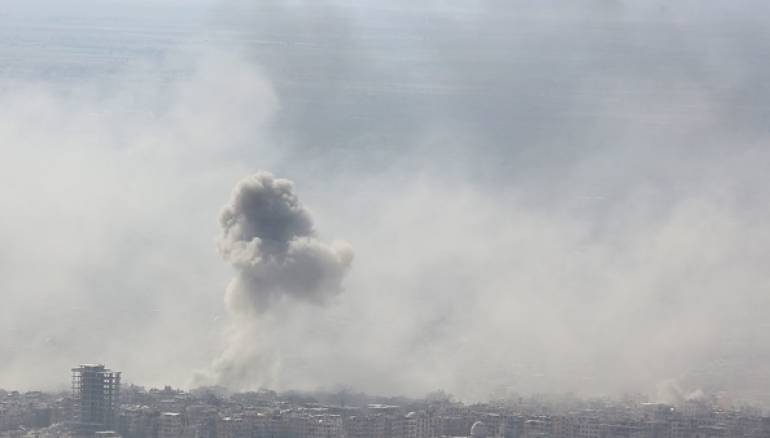 Russia has supplied the Syrian regime with highly advanced weapons and ammunition, including toxic gases, during its deadly offensive on the Eastern Ghouta suburbs, a military source told Zaman al-Wasl Sunday.

The weapons, which had been stored in Al-Dumayr and Al-Seen military air bases, east of the capital, in March included toxic gases, cluster bombs, white phosphorous and incendiary bombs.

Al-Seen, or Sayqal airport, is the most important airport in Syria and one of the largest military air bases in Asia.

Russia has restricted the use of its weapons to special attacks under its command.

More weapons have been transferred since March, according to the source, to depots under the supervision of a special technical group responsible for the receipt, storage and loading on aircraft, which directly reports to Gen. Bassam Haider, the commander of Division 20 in Al-Dumayr town.

At least 80 civilians have been killed in a chemical attack that hit the town of Douma on Saturday.

U.S. President Donald Trump on Sunday said there will be a "big price to pay" after what he called a "mindless CHEMICAL attack" in Douma, allegedly involving chlorine gas, according to AFP.

"President Putin, Russia and Iran are responsible for backing Animal Assad. Big price to pay," Trump said in a pair of tweets which began with a discussion of the attack in Syria's Eastern Ghouta, where rescue workers alleged that regime loyalists had used chlorine gas.

"Many dead, including women and children, in mindless CHEMICAL attack in Syria. Area of atrocity is in lockdown and encircled by Syrian Army, making it completely inaccessible to outside world," the president said.

Syrian state media and the regime's ally Russia denounced claims of chemical use as "fabrications."

Trump on Sunday criticized his predecessor Barack Obama for not striking after warning that the use of chemical weapons in Syria was a "red line."

"If President Obama had crossed his stated Red Line in The Sand, the Syrian disaster would have ended long ago! Animal Assad would have been history!" Trump said.