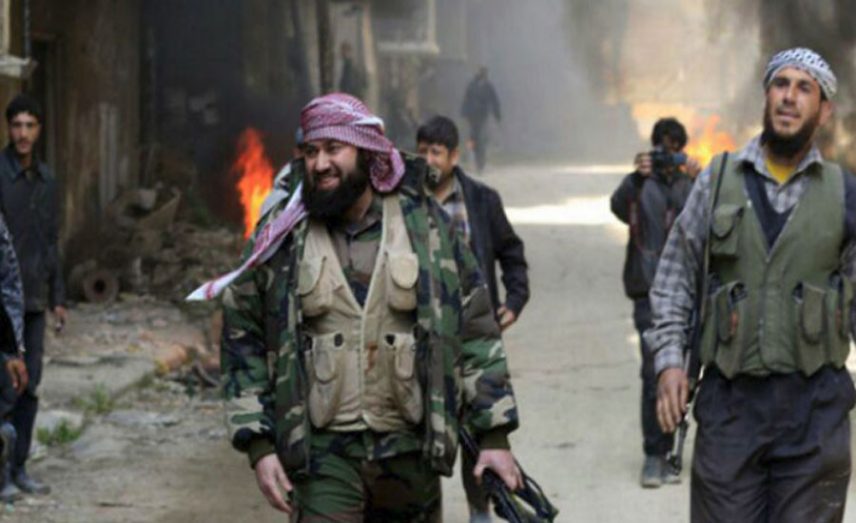 With Jaish al-Islam deploying in the Aleppo countryside, a discussion has begun about its future.

Within this context, the military analyst Col. Ahmed Hamada told Souriatna: “Jaish al-Islam is present in the Euphrates Shield areas without weapons after handing them over to the Syrian regime. Given that it is in Turkey’s territory, any action it takes will need to be in agreement with Turkey.”

He added that “Jaish al-Islam has lost its real strength after being stripped of its weapons and now needs strong support.”

Osman added: “We have no choice but to stand together and work together. In the National Army, we welcome Jaish al-Islam, as they are our brothers. We will be one force in the north and we will overcome the errors which have previously occurred, as the National Army is not monopolizing the factions of the north, as it is for all factions in Syria.”

In a related context, Iranian media reported that “Jaish al-Islam has a number of choices before it, including: Fully join with a strong faction in the north, as the Ahrar al-Sham or Noureddin al-Zinki did, or it could ally with one of the factions in Idleb or the Aleppo countryside to preserve itself as an entity.”

Iranian media also said that the Jaish al-Islam’s presence in the Euphrates Shield areas would bring it into the context of the war which Turkey is carrying out with the Kurdish YPG and participation in the Euphrates Shield and Olive Branch operations. This choice would mean Jaish al-Islam moving from the custody of the Saudis, who had been supporting them, to Turkey’s.

The Russian Sputnik agency says that “Jaish al-Islam will be recycled and used in the Saudi war on Yemen in light of the Saudi army’s inability to create any strategic change there. However, this matter would be connected to Turkish agreement and its satisfaction with this step, as the Jaish al-Islam would have to move through Turkey, unless Saudi can find other means of transporting them without getting this agreement.”

Various reports have confirmed that Saudi Arabia has been giving support to Jaish al-Islam, although the latter denies this. Other media have said that Riyadh was behind the assassination of Zahran Alloush and after that it ended its support gradually.

What is the truth of handing Raqqa to Jaish al-Islam?

The Kurdish Basnews agency said that the “areas east of the Euphrates under the control of the Syrian Democratic Forces are witnessing sharp changes in which Kurds are losing their roles in favor of Arab forces and factions loyal to Gulf states.”

The agency added that “the second step will be for Arab tribes to be handed areas east of the Euphrates with Saudi-Qatari-Emirati funding with American support.”

It noted that “the Arabs will withdraw from the Syrian Democratic Forces and will join the Saudi ally in Syria, and will form an army with about 60 percent from the Arab tribes, while the Kurds and Syriacs will receive the Kurdish areas and will form a new administration.”

However, Jaish al-Islam denied in a statement what the media had reported about a proposal to send it to Raqqa. It said that it “did not have any connection with any state over new arrangements regarding northern Syria,” and that it was in the Euphrates Shield areas and was working within the general policy followed there.

Jaish al-Islam considered what was reported about moving it to Raqqa “no more than another chapter in the media and intelligence war targeting the army in its base and its environs” adding that it rejected “the principle of allocations or any territorial division” and that it “believed in the necessity to remain good neighbors with the Turkish republic, which has given much to the Syrian people.”

The co-president of the Syrian Democratic Council, Elham Ahmed, denied that Raqqa province would be handed to Jaish al-Islam and added that “so far, we have not been informed of negotiations or of the idea, and so the delivery and receipt operations which occur between the regime and rebel groups are not a solution. Handing over other areas to factions not from the region will also bring new problems which could lead to a state of chaos and imbalance in fighting the Islamic State organization.”

Col. Ahmed Hamada believes that “Ankara is has been facing differences with Washington around Manbij for a year and so it is hard to determine what Raqqa’s fate will be in the near future. This requires long discussions between the Turks and Americans according to exchanged interests. Even with Tel Rifaat, Turkey has not been able to decide its fate yet, so what will be the situation with a large province like Raqqa?”