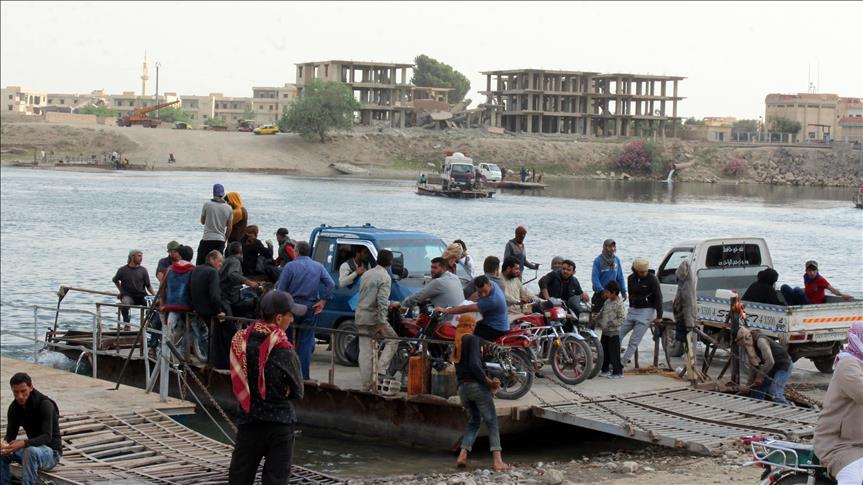 Civilians in Raqqa have been risking their lives to cross the Euphrates River, after bridges that were destroyed by YPG/PKK terrorists a year earlier have still not been repaired.

The bridges, which link Raqqa's city center with the southern and western rural areas of the country, collapsed when U.S.-led coalition forces attacked the city in Jan. 2017 during a campaign against Daesh terrorists.

Since Oct. 2017, YPG/PKK terrorists have been in control of Raqqa, which was once the enclave of the Daesh terror group.

YPG/PKK terrorists have not repaired the bridges to prevent civilians from returning to the city center and to hinder their free movement, a local source, who wished to remain anonymous due to security threats, told Anadolu Agency.

The residents use unsophisticated and unsafe motorized rafts to make the crossing.

The rafts, which are used by around 2,000 people a day, meet various needs such as the transferring of patients, transporting civilians, food supplies and construction materials.

YPG/PKK terrorists and its so-called Raqqa Civilian Assembly have imposed taxes on food and materials carried on the rafts, according to the source.

Owners of the rafts said they warn people about the risks, but they have no other choice.

Mohammed Abu Khalid, one of the raft owners, said: “Crossing the river via rafts is both risky and costly.”

He added that the transportation fee depends on the number of people and weight of the materials.

Khalid said it is more dangerous for the children and women who cannot swim.

On Oct. 17, 2017, YPG/PKK forces, backed by the U.S. cleared Daesh terrorists from Raqqa. More than 2,000 civilians were killed during the operation. Footage filmed by a correspondent for Anadolu Agency showed the city of Raqqa now lying in ruins.

A group of activists — named Raqqa is Being Slaughtered Silently — reported on Oct. 17, 2017 that 90 percent of the city has been demolished.

The YPG/PKK terrorists began looting the city after taking control. They also stopped civilians, who had fled the clashes, from returning to the city.