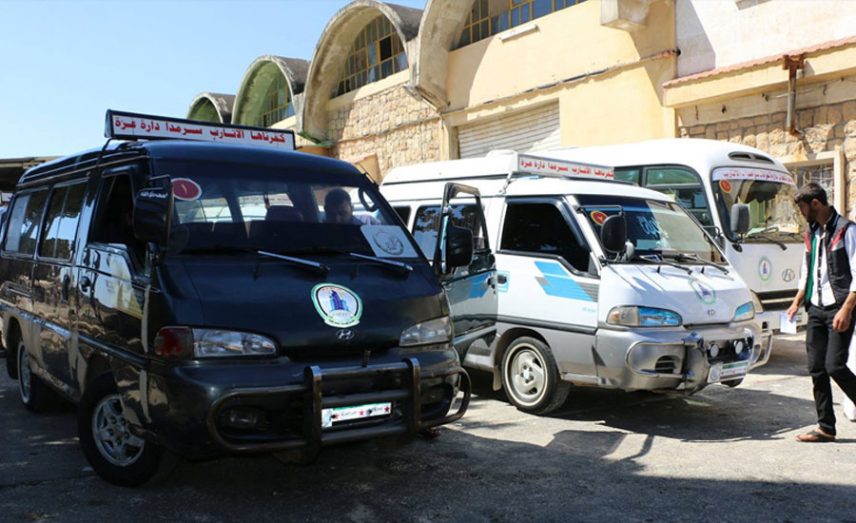 The Transport and Services Directorate of the Free Aleppo Provincial Council has restored a project for the transporting of passengers between western Aleppo and the northern Idleb countryside after it was cut off for years as a result of military operations between the Syrian regime and the opposition in the area.

These routes are covered by about 40 trips per day from 6am until 4am, with a bus leaving every half hour, except emergency trips.

According to a statement from the provincial council, the service aims to meet the needs of civilians in the regions, coinciding with student’s exams and the coming of the month of Ramadan and Eid el-Fitr.

The “liberated” Idleb and Aleppo countrysides in addition to Idleb city and the Jarablus and al-Bab areas in the Aleppo countryside are among the most densely populated areas in Syria, especially after the expulsions of people from Damascus and the surrounding area, as well as Homs, its countryside, and other regions.

The area is distinguished by its commercial and social activity. It has thousands of families from every region of the country and it is adjacent to the Turkish borders, which makes the area the capital of the “liberated” regions, according to Qaranfil.

The region suffers from a lack of transportation institutions and the absence of a public transport company, private sector initiatives, and owners of private vehicles and buses, as well as the volatility prevailing in the area.

The project, according to the head of the directorate, aims to establish routes that meet the needs of citizens and provide them with public transportation and cover their needs in cities and villages.

Those responsible for the project are working to identify the key aspects of public transport, including security and how to spread a culture of trust, safety and stability in transportation, especially after the difficult security conditions that the area has endured recently, in particular the number of car bombs.

The current project comes as a step forward in the organization of a transportation system in opposition controlled areas. Activists say that local councils and factions have failed over the last few years to administer progress in some vital sectors, especially the transport sector, which led to chaotic management of the profession that needs swift solutions.