Events for children, who have been displaced, were arranged by civil society groups and volunteers writes Al-Araby al-Jadeed 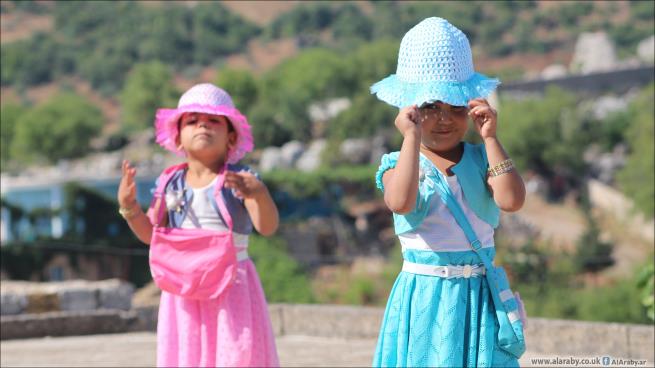 War and displacement has taken away joy in Syria, and likewise the smiles and rejoicing of Eid from most Syrians over the last few years. However, this year children had hours of joy during Eid, with laughter appearing on their innocent faces.

In Idleb province in northern Syria, amid an unstable security situation, a group of civil society organizations and volunteer teams prepared special spaces for children’s games, with swings and other items for entertainment known among Syrians as zahlita and douweikha. Along with these games, there were a number of activities, which brought joy into the hearts of children, according to Samer Mohamed, a volunteer in one of the teams.

Samer told Al-Araby Al-Jadeed: “Children in northern Syria have a right to live like any children of the world, in peace and security and they have a right to be happy during Eid.” He added: “We tried to contribute, if only a little, in bringing happiness to their hearts. We set up some swings and sang with the children and did face-painting. They were simple things, but they made the children very happy.”

In the northern Aleppo countryside tents were set up with toys for children to play with. There were video games (Playstation) and billiards, in addition to other activities including competitions and horse rides.

Mohamed Baroud, a child from the Aleppo countryside told Al-Araby Al-Jadeed: “I rode on a horse today and I was very happy. On the first day of Eid, I bought a plastic sword and asked my big brother to take a picture of me and publish it on Facebook. I’m very happy this Eid.”

In Afrin, the situation this year was different. The public parks were full of hundreds of children from the area and those who were forcibly displaced there.

In the Deir al-Balout camp near the city of Afrin in the Aleppo province, which is home to more than 5,000 Syrians displaced from eastern Qalamoun and south of Damascus, some activists distributed plastic toys and Eid sweets to a number of the camp’s children, who are spending their first Eid away from their homes.

Regarding his observations in the Afrin area, the activist Ahmed al-Shami who lives there and was displaced from eastern Ghouta, told Al-Araby Al-Jadeed: “The most beautiful thing I found this Eid was innocent children playing together, whether Arab or Kurdish, their laughter filling the parks and echoing in the trees. They know nothing of discrimination or racism, and all the forces of evil cannot prevent them from laughing.” He added: “There is not a huge capacity here, no playground ready for children. But their search for joy made some of the public parks into a theater and a playground for them.”