Calls for civil marriage in Syria have increased, but there is still some confusion about what they actually entail writes Enab Baladi 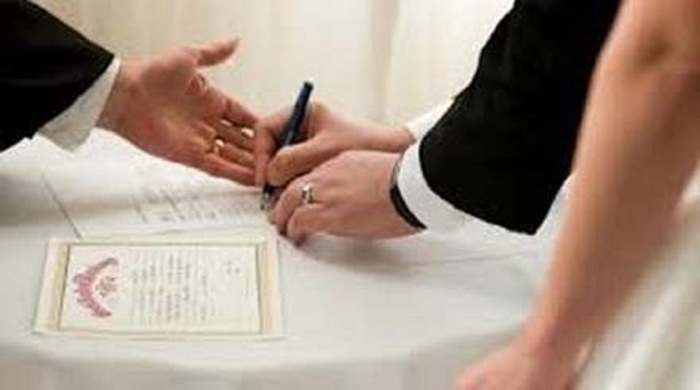 In the most ethnically and religiously diverse part of Syria, civil marriage has emerged as a top priority for the Kurdish self-administration, which has subdued the province of Hassakeh for six years. The first civil marriage contract in Syria was signed in 2013, with the blessing of the "secular authority," marking a sudden breach in social customs.

Hamrin Mahmoud and Rasho Sulaiman, the first couple to have a civil marriage in Syria, were hailed as some sort of pioneers in the eyes of Syrians calling for “freedom from the rule of religion and society,” while others considered their marriage illegitimate. Under the shared-life contract signed by the couple, rather than a marriage contract, the expenses of life will be shared equally. This provided the most “civilized” image that the self-administration politically employed to win international attention and widespread Western acclaim.

In contrast to the blessing of the administration, the establishment of civil marriage led to a popular rejection, which rapidly disappeared as a consequence of the strict rule of the self-administration, but in turn created defensive means for the population, which preserved their religious customs under the secular mold.

Five years after the decision was issued in a small part of Syria, rights activists are now seeking to push a bill in the People's Council (Parliament) that would allow civil marriage across the country through an intensive media campaign backed by supportive voices within the Council.

The campaign relies on social media as an easy platform to reach all Syrians. Loyalist media outlets published several opinion polls to determine views on an issue that is supposed to be sensitive and to partly contradict the “Islamic doctrine.”

Despite the fact that Hamrin and Rasho are Muslims, and religion or race is no obstacle to their marriage, their contract is governed by the civil marriage imposed by the self-administration.

The voices calling for civil marriage to be made optional, that is, the couple could make their marriage religious or civil, are using the issue to directly criticize the Islamic religion, although religious marriages in Syria also applies to Christians and Jews.

Using the hashtags #Civil_marriage #Syria, some Twitter users spend days discussing the issue of civil and Sharia marriage, and are divided between supporters and opponents.

“I am in favor of civil marriage because love brings together, while religion separates,” a banner posted on Twitter said, while a veiled girl carried a banner saying “I do not want anyone to force me to marry someone from my sect or my religion. I want civil marriage.” she said. Another girl criticized polygamy, which is permitted by Islamic law. Some of these banners date back to 2013, but have now been reused with the return of the discussions on civil marriage.

Facebook has been a good platform to promote this issue and some Syrian pages have recently mobilized supporters of civil marriage. Syria's pro-regime Damascus Today Facebook page recently published a poll to vote on the question "Are you for or against the adoption of the optional civil marriage law in Syria?"

More than 47,000 respondents participated in the poll, 63% of whom were in favor.

The result was supported by social networking sites that since 2012 have been seeking to promote the idea of non-religious marriage contracts.

According to Syrian lawyer Ghazwan Qarnafel, allowing freedom of choice between legal and civil marriage is the best solution for society. “I claim that at this stage we are unable to abolish the religious marriage system established by the Sharia courts or the spiritual courts for non-Muslim communities.”

“The civil marriage law does not contradict the constitution. Our system is politically secular and not religious. The marriage of a Muslim woman to a non-Muslim does not violate the constitution, but it violates Islamic jurisprudence,” says Ghazwan Qarnafel.

Civil marriage from the point of view of the Syrian street

Enab Baladi conducted an opinion poll on its website and its Facebook page to collect views on the civil marriage draft law.

The question asked was: “Do you support applying civil marriage in Syria?” It gave users three options: Yes; No. I do not know.

Out of 1,200 voters, 57% voted No, while 32% supported the draft, and 11% said they didn’t know, because they didn’t know what civil marriage entails and how it differs from religious marriage.

Some users commented on our Facebook page. Mohammad Al-Omar wrote: “In Damascus, the number of families originally from the city does not exceed 30, and not all Arabs are of Arab origins,” he wrote. “Civil marriage can cause the loss of lineage and to create a new generation not qualified, to carry the banner of the Islamic nation.”

Musab Ahmed considered that civil marriage is a “customary marriage.” Abdul Qadir Qabbani defined civil marriage as a marriage that “does not comply with Sharia rules, that is, it allows a Muslim woman to marry a Christian man, which is not allowed by the Sharia.”