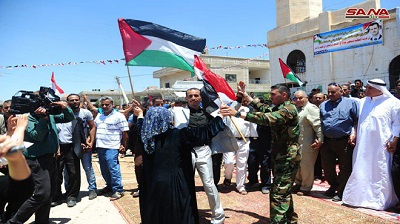 The Syrian war correspondent Rabei Deebh has underscored that a culture of defeat and surrender has spread among foreign-backed terrorist groups as a result of the Syrian Army’s successive victories since 2015.

In an interview with the Syria Times e-newspaper, Deehh said: “During the battle against terrorists in eastern and western Ghouta, the Syrian Army worked on intensifying strikes against terrorist strongholds and breaking the terrorists’ will to fight as well as opening the door for terrorists to surrender.”

He made it clear that the success of the Syrian Army in breaking the terrorists’ will to fight came after they realized that victory for the army is inevitable when it starts a military operation in any area.

The Syrian Army has followed the strategy of cordoning off the terrorist groups to prevent them from moving, cutting off their supply routes and carrying out intensive attacks against their strongholds.

This strategy coincided with popular protests inside terrorist-held areas against the savage practices of terrorists. “The protesters called on Syrian Army units to enter the areas and to save them from terrorists. So the areas were divided into sectors for military operations and for the opening of safe corridors for civilians, as well as working on reconciliation [or settlement] deals.”

“For the past two years there has been a tangible difference in the strategy of war and the nature of armed terrorist groups. When the Syrian Army and its allies advance, the war becomes easier as they work from the very beginning on breaking the terrorist groups’ will to fight and giving them two choices — either surrender or die. Surrender is followed by transporting them to Idleb in the north of Syria or settling their status and they join the fight against terrorists,” the war correspondent said.

He affirmed that the advanced weapons sent to terrorist groups by the US, Israel, Gulf States and other countries supporting terrorism in Syria failed to change the military balance on the battlefield or prevent the Syrian Army from making advances.

“For example, at the beginning of battles in Daraa, US and Israeli TOW missiles were delivered to terrorist groups via the Syrian- Jordanian border and the separation fence in the Golan heights in order to change the military balance there and to stop the advance of the Syrian Army. But this was not achieved and the terrorists could not use the missiles because of popular protests and the advance of the Syrian army,” Deebh said.

He stressed that terrorist groups have no doctrine and they are just mercenaries supported by western and regional intelligences to destroy Syria. “The countries that support terrorism have counted on terrorist groups. In 2015 they launched the so-called ‘Southern Storm Operation’ [Aasefat al-Janoub] in order to separate the south of Syria [Daraa] from the Syrian State, but this also failed.

90% of Daraa Towns Erupted Against Terrorists

Terrorism supporters have realized that their mercenaries have no chance of victory over the Syrian Army and its allies in Daraa, therefore they abandoned them.

“When the battles started in Daraa, top-ranking leaders of terrorist groups fled to Jordan after they had sold their weapons to other armed groups. While the second-ranked leaders of terrorist groups tried to prevent popular protests against them by hanging people who supported reconciliation deals, but they failed,” Deebh said, asserting that popular protests against terrorists erupted in 90% of towns in Daraa.

“In some of Daraa’s towns, the protesters turned into armed popular cells and they stormed terrorist headquarters and took their weapons from there in order to fight against terrorists,” the war correspondent said, pointing out that a huge number of armed terrorist groups surrendered after they failed to achieve a victory over the Syrian Army in the ongoing battle in southern of Syria.

Some of these armed fighters settled their status and joined Syrian Army units’ supporting forces to fight against terrorists.

“As soon as the Syrian Army and its allies complete military operations and reconciliation deals on the western side of Daraa, they will move to defeat ISIS on the border of the Yarmouk Basin. Then all areas of Daraa will be free of terrorists,” said Deebh, who accompanies Syrian Army units in their operations.

A Message to Western Correspondents

Asked about his message to western correspondents, who cover the war in Syria, Deebh replied: “I wonder how foreign journalists who cover and document the war in Syria can describe those who perpetrate crimes against children, women and military personnel as ‘moderate opposition’?”

He went on to say: “I wonder how these western correspondents, who claim that they are implementing the principles of international journalism, can infiltrate Syria to cover the operations of what they call the ‘armed moderate opposition’ and accompany al-Nusra Front terrorists in many areas to make an exclusive reports? What would foreign correspondents do, if we [Syrian journalists] described the perpetrators of terror attacks in any western country as a ‘moderate opposition’ and their attacks as revolution? I want to know what will be their feeling about this?”

Over the past few days, the Syrian Army discovered arms caches and British armored vehicles as well as US and Israeli made missiles in Daraa -near the Syrian-Jordanian borders — recently liberated by the Syrian Army and its allies. This proves once again the involvement of the US, Israel, Jordan, Britain in the terror war in Syria.