A center in Damascus, which is run by the Syrian Arab Red Crescent, is now producing 50 artificial limbs a month writes Asharq al-Awsat 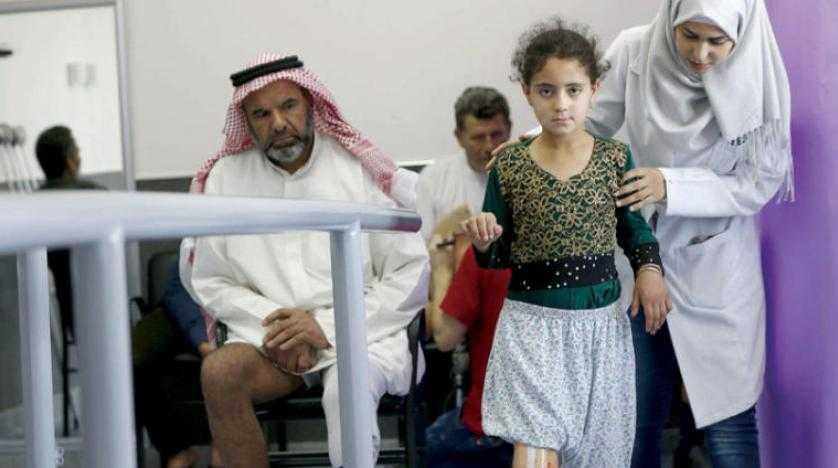 For the first time in over a year Syrian war victim Abdulghani Ghayyana has been able to walk again. Supporting his weight on a metal walker and two Syria-made prosthetic artificial legs Ghani, like tens of thousands of Syrians wounded, is trying to recover.

“I want to be able to stand on my own two feet again,” says the 48-year-old veterinarian, his anxious son trailing him across the busy ward.

“I'm doing my best so that I can help myself and do the job I love,” AFP reported the father-of-seven from the central province of Hama as saying.

Abdulghani lost both his legs in March last year, after being hit during shelling as he rode home on his motorbike from a job vaccinating livestock.

“After I was injured, I felt really desperate. I couldn't move and I constantly needed help… It was a lot to bear,” he says.

“I was deeply embarrassed for my son whenever I had to go anywhere,” adds Abdulghani.

A doctor in Hama referred Abdulghani to the Damascus center, which is run by the Syrian Arab Red Crescent with support from the International Committee of the Red Cross.

Every day, dozens of patients arrive from across Syria, whether they have lost limbs in the war or as a result of illness.

The center started making its own prosthetic limbs in 2010, director Nazeer Kanaan says, but became more active after the civil war began the following year.

The number of amputees “increased due to the crisis, accidents, gunshots, (shell and rocket) fragments and landmines,” Kanaan says.

Production jumped from 250 artificial limbs in 2014 to double that last year — and since May, the center’s workers have been churning out 50 a month.

The facility mainly makes prosthetics for people whose legs have been amputated above and below the knee, says 28-year-old supervisor Ayat Ezzadeen.

“Sometimes a patient turns up who's really down, but we give them an artificial limb and they perk up,” she says.