The former United States Ambassador to Syria, Robert Ford, recalls a time he visited the house of Rami Makhlouf for dinner with him and his wife. 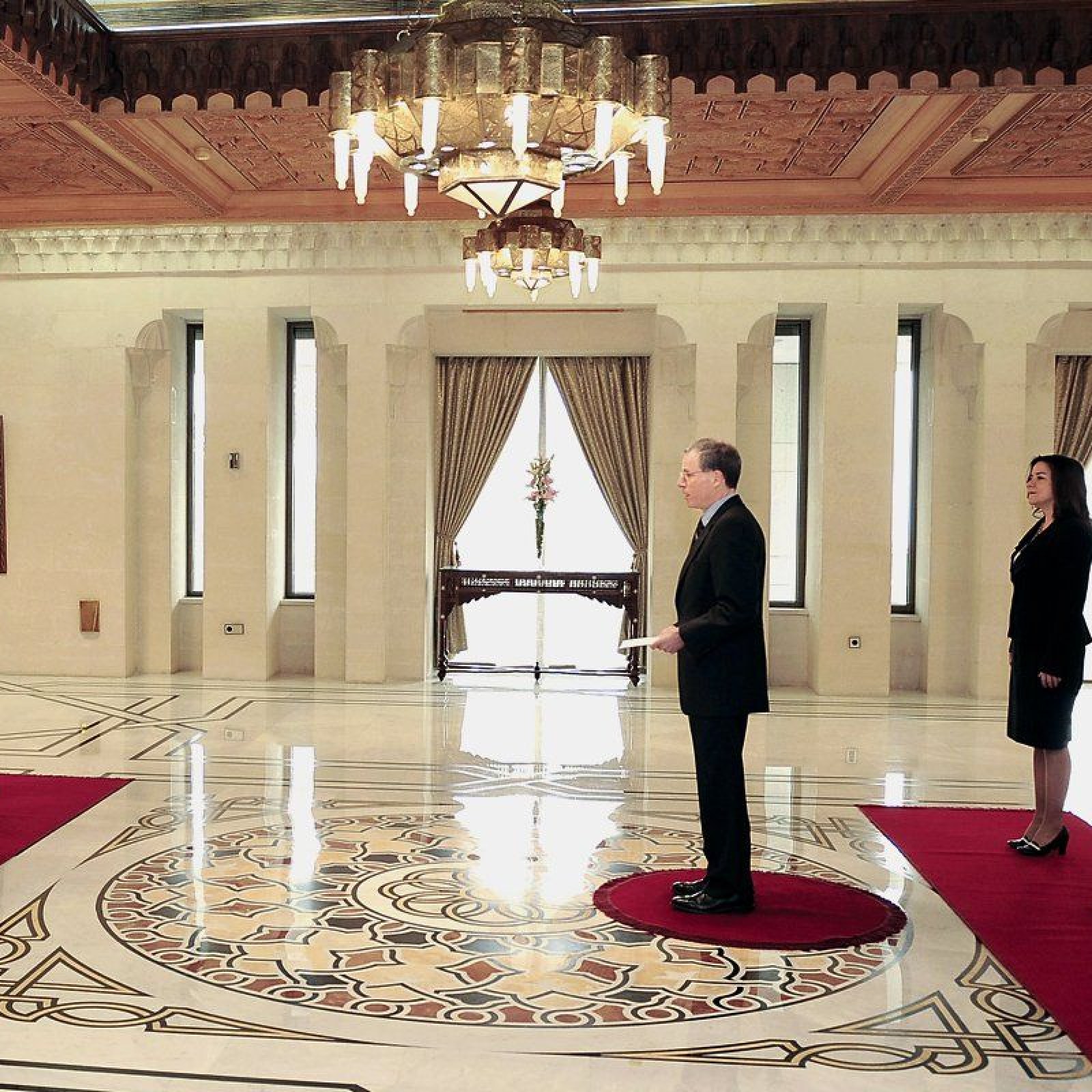 Rami Makhlouf invited me and my wife to an usual dinner at one of his homes near Damascus in March 2011. His lands were so vast that it took five minutes driving 20 kilometers per hour to reach the house from the gate. The designer of the house created something like a California dream house there in the Damascus countryside.

Mrs. Makhlouf was elegant but did not say one word the entire evening. The father of Rami was there, he asked for my birthdate and my wife’s birthdate and made predictions about our futures based on the sequence of the numbers and how different sums of the numbers indicated particular future events. (He didn’t predict my criticism of the Syrian government’s oppression in the Syrian uprising.)

The food was excellent and very delicious, as is usual with Syrian cuisine but there was only one small plate and different from every other dinner I ever attended during my 30 years in the Arab World, the host did not offer more food. Rami was polite and didn’t ask about the American government sanctions against him since 2008 and I didn’t raise the issue either.

Two months later, Rami in an interview with the wonderful New York Times journalist Anthony Shadid warned the Syrian protesters and the West that the ruling elite in Damascus would fight rather than accept change. In early May while the street protests drew people from all the different communities in Syria, Makhlouf stressed the Syrian government was fighting a rebellion under the control of Salafists. His message was different from the message Walid al-Muallem and Buthaina Shaaban were giving me about President Assad’s commitment to reform and stopping the violence. Buthaina assured me that the president was unhappy with Rami Makhlouf, but in fact history shows that Rami’s words were accurate.

Now after the passing of nine years, Rami is talking again, this time on Facebook. He has discovered the security apparatus is assaulting people and violating their freedoms. It’s terrible! He discovered that the government detains and threatens loyal citizens. It’s inhumane! He discovered corruption in the Syrian government, saying that he was resisting paying taxes because he didn’t want the monies to go into others’ pockets. Imagine, thieves in Damascus! He acknowledged that his companies’ revenues had helped pay for the security apparatus, that he was the biggest patron of the security apparatus, and he was shocked that the intelligence agents are now arresting directors from his companies. He who sows the wind harvests the storm.

There are, of course, different opinions about the cause of the divisions inside the opaque Syrian regime. Some Russian analysts and companies also have discovered the presence of corruption in Damascus and so now they complain. Or another story is that they knew before but now they demand payment of loans from Assad’s bankrupt treasury and so Bashar has to take his cousin’s monies. According to one Syrian analyst, Asma Assad and Rami are fighting for control of the economy. We should remember that Asma was a manager for the American investment bank J P Morgan in London before she married Bashar, so she would understand Rami’s games. I have seen another Syrian analysis that businessman Khodr al-Taher, who is in the circle of the general

I don’t expect divisions between the Syrian ruling elite to help bring a political transition soon.

I was a student in Cairo in 1984 when Rifaat Assad attempted a coup against his brother Hafez. The Russians didn’t intervene then and Hafez kept the reigns of power. Rami’s brother Hafez Makhlouf was a senior official in General Security, but left the country in 2014 after a dispute with the Assads. Many think the 2012 bomb that killed senior Syrian officials, including the Defense Minister and Bashar’s brother-in-law Assef Shawqat was a plot by one group in the regime against Shawqet’s group. I don’t know the reality, but Shawqat’s widow Bashar’s sister Bushra fled to Dubai. Through all this, the Assad family has stayed in power. Most important, the security apparatus has remained loyal to Bashar. Rami’s Facebook talks indicate that Bashar understands he must keep those intelligence thugs satisfied.