Recent diplomatic activities in New York between Syria and Saudi Arabia have led people to expect a resumption of relations writes Al-Watan. 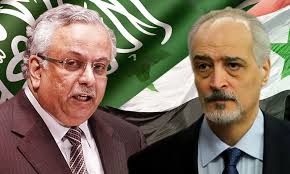 News that Syria’s permanent representative to the United Nations, Bashar al-Jaafari, had attended a private party held by Saudi Arabia’s UN Ambassador Abdullah bin Yahya al-Maalami made a loud impact. It was the first meeting that brought together the two figures in an official capacity after a long disruption—and, more than that, it occurred in New York. It sent a message that could indicate that Saudi Arabia is heading towards a new shift in its Syria policies.

Looking into the details of what preceded this step, you may find signs that would indicate where the Arab scene will head next. The Saudi invitation came about a week after Damascus announced steps to hold a tripartite meeting with Russia and Turkey in Moscow. The Syrian side will be headed by the president of the National Security Bureau, Ali Mamlouk, who visited Saudi Arabia about a year ago as part of the arrangements at the time to restore relations between the two countries and restore Syria’s seat in the Arab League—something which was derailed quickly by Washington with denials delivered by its envoy James Jeffrey, with these denials remaining in effect until the day before yesterday.

Saudi Arabia and the United Arab Emirates, which was the first to move towards Damascus, today are in a real battle with Turkey and its “Ottoman” ambitions, which have almost reached the point of a direct military clash on the Libyan front, where the Gulf-Turkish clash appears clearly. This clash would not have reached this point if it had not been for the policies of these same countries, which have weakened what is historically the most dangerous strategic divide for the region—in Syria and Iraq—and directly helped the Turkish expansion to take control over Arab resources and territory through the lever of the “Ottoman Brotherhood” from whom it received the total loyalty it needed from a considerable segment of the population of Arab countries. This revealed the failure of Arab governments to replace the loyalty of those dreaming of restoring the Ottoman era with the national loyalty within the concept of the nation state.

Saudi’s latest turn, which seems to have been forced, is a swift attempt to acknowledge the new strategic loss that has kept it entirely out of all the region’s affairs, which remain hostage to the American position, and which has derailed all Russian and non-Russian attempts and mediation to bring the Arabs back to Damascus.

In the 1990s, the Arab tripartite of Saudi, Syria and Egypt, was the national guarantor and safety valve for the whole region. The striking down of this tripartite will mean heading into the unknown. The Arab guarantor is no longer there, and marketing the wings of the region—Saudi and Egypt—has proved incapable of confronting the current horrors. This comprises a heavy blow to the Arab body. The conspiracy against Syria and the region as a whole has led to what is occurring today, with Turkish President Recep Tayyip Erdogan boasting with all his arrogance and intransigence, that he wants to capture more of Syria and to remain permanently in Libya and maintain interests that don’t end in Somalia or elsewhere—without forgetting its military base in Qatar.

Everyone need to see the return of the lost tripartite and Syria is also in need of strong ties to other Arab countries, just as other Arab countries need a deep relation with Syria. We therefore await the next step and the chance to overcome the denials of diplomacy and restrictions coming from Washington.