Putin's recent trip to Damascus has highlighted the strain in the relationship between the two presidents and the differing views of the two men writes Al-Modon. 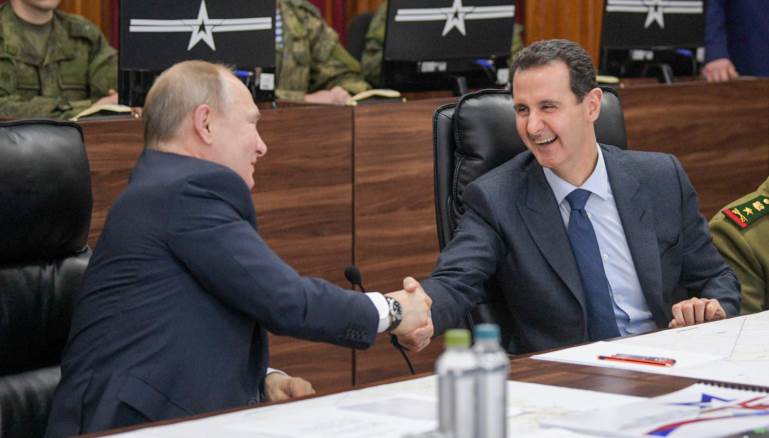 The Russian president will not leave Moscow soon—or at least not until 2024, when his current, fourth presidential term ends. But the Syrian president will definitely not obtain a fourth seven-year presidential term, starting in 2021 and ending in 2028. The most probable issue is that he may reside in the Russian capital—specifically in a luxurious apartment in a residential tower owned by the Assad family and a number of relatives … or in an official political refuge villa in one of Moscow’s suburbs.

Instead of his first visit to Damascus seeing a large official gathering at the airport, with all the protocols of the official relationship between the two countries and with the two presidents walking together on the red carpet toward the Syrian presidential palace to carry out official talks in the presence of two high-level delegations, followed by a closed session between the two and a joint press conference—or at least a statement agreed upon in the name of the two countries and kept in their official documents—instead of that, Putin was keen to take a visit with the appearance of a military and religious tourist visit to the capital, overseen and managed and protected by Russian forces, who do not acknowledge the sovereignty or legitimacy of the Syrian state or even the presence of its president.

It was a settling of old Russian scores with Bashar al-Assad, who has dealt since the first day with the Russian military intervention in the fall of 2015 as if it was a gift to the Russians, who were looking for a global role, Mediterranean influence and a Middle East presence—not as a life raft thrown by Russia to his regime. On this basis, Iran has remained his first and best choice. Iranians have received more rewards in terms of the volume of his offerings and sacrifices, many more than those obtained by the Russians. Assad and his partners in Tehran have also long told an inexact story about how the Russian intervention would not have happened without the urgent message from the Iranian command carried by Iranian General Qassem Soleimani to Moscow, which responded immediately and the next day mobilized its air, naval and ground forces.

Perhaps this reading has changed since the assassination of Soleimani and what has been said about Putin coming to Damascus to demand that Assad be very careful in dealing with this key event in the American-Iranian dispute and to not risk exposing himself or his country or Russian forces to any threat, and subsequently to get ready for a new situation to be imposed by hard American pressure on Iran, which could force it to leave Syria, and increase the Syrian regime’s need for Russian cover, militarily and politically.

The meeting in Damascus was not between the two presidents nor between two commanders of their armed forces. There was no talk of politics, which in form at least requires the presence of the two foreign ministers (despite the marginalization of the Russian Foreign Ministry in Syrian affairs to the benefit of the Defense Ministry and its officers). The presentation given by the Russian minister of defense and major Russian commanders in the former headquarters of the Syrian General Staff was given to Putin, with only Assad and his defense minster listening. It looked more like an invitation to the Syrian president to fully discipline the mechanisms of military action.

Damascus and Moscow share many doubts about the intentions of the two presidents, brought together by chance and who will not be united by the plans being prepared for the Syrian presidential elections in the spring of 2021.