The killing of Qassem Soleimani in a US drone strike has deepened the sharp divisions across the world writes Al-Araby Al-Jadeed. 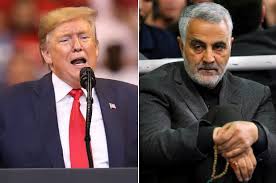 Why did most Syrians rejoice in the death of the leaders of the Iranian al-Quds Brigade? Put simply, he made them taste woe. He killed their men, women and children, and displaced their families, and during sieges made them eat grass and watch their children starve and fall ill before their eyes. Every Syrian who has lost a son or a sibling or mother felt something like justice in the death of a man who had committed horrific human rights violations in Syria, as in Iraq and Lebanon. He was the de facto ruler of the Middle East.

But there are a large number of Syrians who were saddened by his death and who held mourning sessions. President Bashar al-Assad described Soleimani’s death as an “insidious and cowardly American aggression,” and lamented the loss of Soleimani, saying that he would remain, “immortal in the souls of the Syrian people, who will not forget how he stood alongside the Syrian Arab Army in defending Syria against terrorism and its backers, nor his clear and many victories against terrorist organizations.” This was forgetting that Soleimani himself described the Syrian Arab Army as “useless” and that he wished he could be given the authority to use a single brigade of the Basij (the Iranian security apparatus),”Give me one brigade of the Basij, and I could conquer the whole country,” he said.

The deep division among Syrians is not exceptional. Americans were also sharply divided around Soleimani’s death, between those who were excited to cheer on President Trump and those around him, and those who criticized his “recklessness and irresponsibility.” Major Republican figures declared their support for the killing of Soleimani, and some did not hide their childish elation. The head of the Senate Judiciary Committee, Lindsey Graham, said in a tweet: “I appreciate President Donald Trumps’s bold action against Iranian aggression. To the Iranian government: if you want more, you will get more.” He added: “Thank you, Mr. President, for standing up for America.”  The minority leader in the House of Representatives, Kevin McCarthy, expressed his support for the airstrike. The Senate majority leader, Mitch McConnell, focused on President Trump and his administration’s justification that the operation came as a preemptive response to operations Soleimani had been planning against American interests. In a TV interview on Sunday, Secretary of State Mike Pompeo did not hesitate to say that killing the terrorist Soleimani was also because of the hundreds of thousands of Syrians he had killed and millions displaced.

In contrast, the speaker of the House of Representatives, Nancy Pelosi, complained repeatedly that President Trump had left her and other Congressional leaders out of the loop before carrying out the operation. Democratic presidential candidates warned that Trump’s behaviors would certainly meet with revenge from Tehran, and that the United States could be pushed into another war in the Middle East. Former Vice President Joe Biden, now running in the Democratic primaries, said that, “President Trump just tossed a stick of dynamite into a tinderbox, and he owes the American people an explanation,” while Democratic presidential candidate Bernie Sanders said that, “This is a dangerous escalation that brings us closer to another disastrous war in the Middle East,” adding that, “Trump promised to end endless wars, but this action puts us on the path to another one.”

Hundreds of Americans went out to demonstrate in Washington, New York, Chicago and Los Angeles, meeting the calls from leftist groups and calling for the immediate withdrawal of American forces from Iraq and rejecting war against Iran and the sanctions imposed on it. The liberal American press in general stood against Trump’s operation, but they did not reach the degradation of their leftist media colleagues in Europe, which bases it policies on a defiance of American policies in general, and as a result was driven to seeing Soleimani as a revolutionary fighter, nor did they get close to the degradation of some Arab and Palestinian leftists, with a member of the Fatah Movement’s central committee, Abbas Zaki, describing Soleimani as the “Che Guevara of the Middle East.” This came in addition to the statements of the pro-Iran Al-Mayadin channel that, “Soleimani’s assassination will have dangerous consequences for the region,” predicting that, “its results will be very costly for the United States.”

In his death, as in his life, Qassem Soleimani has deepened the sharp divisions among Syrians, Americans, Iraqis and Lebanese. This was his aim. He had himself overseen the killing of Syrians, the bombardment of civilians, and the destruction of hospitals and schools. He used his influence over the Iraqi government to get permission to use Iraqi airspace to transport the soldiers and equipment Assad needed to Syria, from Iran via Iraq, throughout the years of the war. In his speech before Iran’s Assembly of Experts in 2013, Soleimani said: “Syria is the first line of defense for the resistance. This fact is beyond doubt.” In Iraq, he played a role in repressing the popular protests against the regime by giving orders to Iraqi puppets he controlled, such as the Popular Mobilization Forces.

For Syrians to celebrate the death of the butcher is legitimate and justified, but what is not justified is what we have seen on social media in terms of the exaggerated praise of President Trump. The man did not kill Soleimani for the sake of Syrians or Iraqis, but for his interests and those of his party. I think that this praise will subside in the coming days—especially given that it is likely that Tehran will swallow the insult and put salt in the wound, and then work with greater insistence on its nuclear project. But this is another subject.