In a recent interview, Assad has spoken about the role of Tehran and Moscow as well as the possible outcomes of the constitutional committee and the status of the Kurds writes Al-Modon. 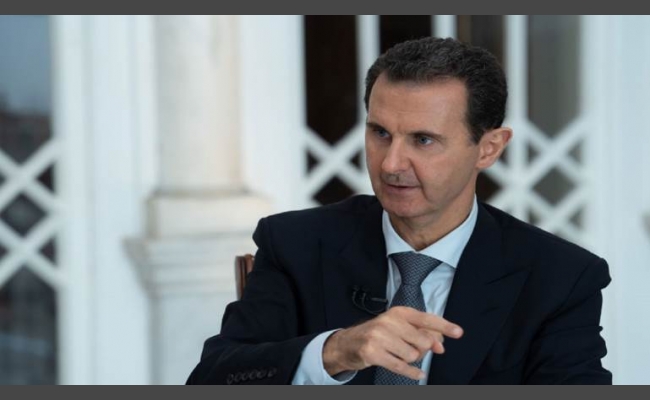 Bashar al-Assad has appeared in a new interview with Syria TV and Al-Ekhbariya, the two channels affiliated with the Ministry of Information, with the questions prepared in advance for the interviewers. The fact that there was no international media was not striking, because international media tries to speak with influential figures behind major events, and it does not seem that Assad has been influential recently, even in the dramatic events in northern and eastern Syria, including the death of his counterpart leader in the Islamic State (ISIS). This description is not cynical, but is based on his own media machine’s expression: Assad or ISIS.

Unfortunately, Baghdadi’s death appears at the start of the interview, when Assad casts doubt on the American version of his death and considers it a hoax. He does not practice the minimum of diplomatic tact by saying that he hopes the report is true. Confirming that the leader is dead and pledging allegiance to his replacement will not embarrass the organization. Assad was not embarrassed to describe ISIS as Wahhabi, which suggests he is profoundly ignorant of the intellectual origins of a group that he claims to be an enemy of.

Resuming the embarrassment, Assad said he forgot that a summit between Putin and Erdogan was being held when he appeared among his fighters near Idleb, when he was asked if his presence there was a message to the summit. If we do not take into account the nature of his personality, this his statement may be considered a sort of disregard for Putin and Erdogan, who were meeting specifically to come to an understanding around developments in Syria. The other possible reading puts him in a worse state—as state of not understanding the importance of following developments and details that he should, even if only theoretically, be familiar with, as the tendency to be above reality overcomes him.

With pride and arrogance, Assad refers to a sharing of roles between him and his allies. He handles internal affairs and holds the rains of power and major decision-making, while Tehran works on a regional level, and Moscow on an international level with regards to Syria. The basic idea he wants to sell is that he is still president, in this sense, and that the redrawing of areas of influence that has recently occurred is temporary. Ankara is vowing a war to retake the areas it controls and Washington is vowing a war of popular liberation later if it decides to remain after finishing with the Turkish presence, but Assad is the capable president who prefers to regain control by peaceful means, giving a chance for his allies to help him politically. If his efforts do not succeed, he is ready for war.

Assad touched upon two issues that reveal his conception of regaining control. First is the Kurdish issue, where it was clear that accepting the presence of Syrian Democratic Forces (SDF) in some areas he controls was temporary, imposed by the current circumstances, and that after it expires, he is determined to get rid of this partnership. On the Kurdish matter, Assad recalls the discriminatory policies of 1962, before the Baath regime, as if decades of his father’s and his own rule had not been concerned with correcting the mistakes that occurred before. The most important of these comparisons was between the Armenians and the Kurds—the Armenians enjoy special treatment, in terms of being allowed Armenian schools, cultural clubs and so on, because they are guests and their presence in Syria was treated on that basis, unlike the Kurds, some of whom see Syrian territory as part of Kurdistan. It is as if the comparison is moving towards a bargain in which the Kurds view themselves as a minority in the country and therefore enjoy the same privileges the Armenians do, and that without that they must return to the pre-2011 status quo.

The other matter is the work of the constitutional committee, where Assad as usual did not delay in stigmatizing members who did not represent him of treachery or terrorism. Interestingly, he tried to disavow participation by saying that the third affiliated with him does not represent him officially because it refuses to negotiate from a position of parity, and explicitly stated that he does not accept the opposition as a party. This does not stop at a formal difference between amending the constitution or wanting to write a new constitution, because the two head in the same direction. The most important thing for him is that with the new text, he will not accept any amendment that weakens the state. What is meant here is anything that weakens his control, in the sense that he will not approve any items that affects the structure of the regime.

Even the presence is Geneva, Assad considers to be a mere geographical presence. He does not recognize a UN-sponsored political process and does not accept subsequent presidential and parliamentary elections under his supervision. In short, he will not accept anything other than a constitution with cosmetic amendments which do not affect the essence of his authority, followed by elections he runs when he prefers. As with the Kurdish affair, Assad promises the opposition negotiators nothing but a return to before 2011, as if he is warning them not to bet on his allies before betting on other international powers.

In summary, Assad says that he only accepts policies that achieve the goals of his war, which are goals that have not changed since the start of the uprising. The easiest assumptions is to consider all these statements a sort of chatter from someone who no longer has real authority. We should not forget what he himself does not provide an opportunity to remind us of—that is, the Assad regime’s inability to reform or make the slightest change in its structure or thinking which is not put out as arrogance or a joke. Indeed it is the most real talk that can come out, and in this sense it is difficult to describe it as a disconnection from reality as much as it is faithful to the reality of his authority.

Of course, Assad does not address all of the above to his audience, nor to the Syrians who know him so well. The disclosure is directed first and foremost to the parties active in Syria if any of them are deluded into thinking of recycling him in a different manner. This disclosure would gain more weight if there was an ally who instructed him to appear and say what he said at this time. This is a presumption that has some justification given the uprisings in Lebanon and Iraq.