The decision by Donald Trump to withdraw US forces from Syria has left a vacuum in the country that will be filled and fought over by other countries writes Al-Araby Al-Jadeed. 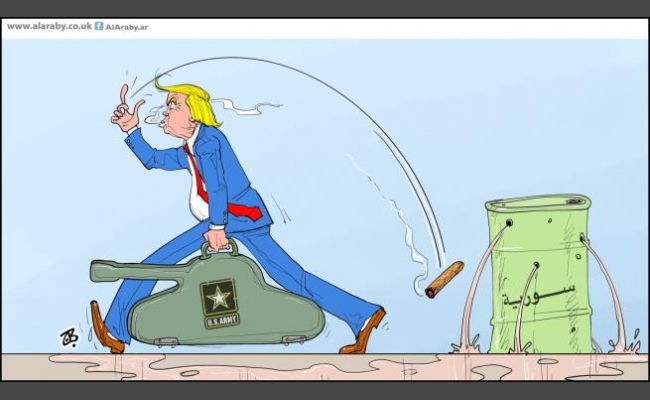 With the United States’ departure, the Syrian war is entering a new phase, defined by the legacy of American influence in the areas east of the Euphrates. The United States entered the war in Syria in September 2014, to lead an international alliance to eliminate the Islamic State (ISIS). Some figures in the Trump administration (all of whom have been kicked out) tried to develop the goals of this alliance after fulfilling its purpose, by including other elements—such as repelling Iran and preventing it from setting up a land corridor between Iraq and Syria, and using the American presence as a card to put pressure towards finding a political solution. But President Trump was entirely preoccupied with his internal battles, and was not concerned with this. He did not even think of bartering with the American presence, for example, for the Iranian presence, which he claims to be fighting in Syria. He eventually decided to pull out his forces entirely and to maintain a small military presence in the al-Tanf base in the country’s southeast on the border with Jordan and Iraq, leaving the others to fight over the legacy.

With the American withdrawal, all the conflict’s dynamics have changed—just as happened when Russia entered the war in 2015. The Americans abandonment of the Kurds has forced them to return their bases to the Russian embrace and thereby turning over a new page in a history full of major disappointments. Syria has now become entirely dependent on the deals—or conflicts—reached between the three powers of the Astana process: Iran, Turkey and Russia.

During the previous stage, the Russians, Iranians and Turks agreed on one thing: The need for America to withdraw from Syria, each for its own purposes. They have now succeeded in that.

The question now is how will the Astana partners resolve their differences after they succeeded in expelling the Americans from Syria and marginalizing the roles of the Europeans and Arabs there? Will the Idleb scenario be repeated? Will they enter into a bloody proxy war in which Syrians pay the price? Or will the Afrin and “Euphrates Shield” scenario be repeated? Will we see a “Syrian Yalta” in which the victors divide the spoils of their war? The behavior of Russia—which has come to hold the reins of the conflict entirely—suggests the second scenario, despite the fact that President Putin has not been afraid to express his desire for everyone to leave Syria and for him to monopolize it entirely.

While the three victor countries enter into negotiations and agreements to distribute their spoils, Syrians—who own the land and the cause—have found themselves something new to be divided over, which is insulting Trump and calling him treacherous because he abandoned the Kurds after using them against the Islamic State group, or insulting him because he abandoned the field to Iran and Russia; or a third group, which supports the Turkish military operation because they align with Turkey’s political and security needs; or a fourth that calls the Turkish operation an occupation and invasion of Syrian territory and fears that it will be annexed; or a fifth that fears the establishment of a security zone and rejects the settlement of Syrian refugees there, considering this to be a demographic change that will destroy all hope of refugees and displaced returning to their land and homes. Amid all this controversy, one can easily distinguish the two major camps among Syrians today: The Iran camp and the Turkey camp—the Guide’s Syrians and the Sultan’s Syrians. If we want to be more precise, we can distinguish a third camp trying to raise its voice to regain the initiative and to recover what remains of the remnants of the nation which has lost its ambitions, been murdered by hatred and vanity and narrow-mindedness and abandoned as prey for countries and organizations struggling over it. But that voice is still weak and quiet amid the fray.