Since its intervention, Moscow's priorities have shifted and it is now looking to form relationships with the US and Israel writes Al-Araby al-Jadeed. 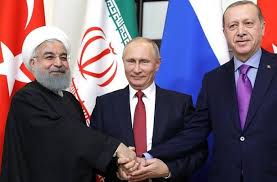 Moscow waited more than four years to intervene militarily in Syria, and did not do it until it confirmed that Washington had no motivation or interest in the outcome of the conflict. It also waited until Iran came asking for their help after despairing of its own ability to rescue its Syrian investments.

After that, Moscow loaned President Recep Tayyip Erdogan an important position during the failed coup attempt in July 2016. Sources allege that it was them who informed him hours before it occurred, prompting the conspirators to rush their execution before the elements of its success were complete. From here, Moscow began to implement a plan for Turkey to pull away from Washington, and so drew it into the Euphrates Shield operation, which secured a border area between Jarablus and Azaz, and then persuaded it to enter the Astana track after the Aleppo agreement. Then it added in Iran, so that it wouldn’t be destroyed, before coming up with the story of the “de-escalation zones,” which enabled it to freeze the conflict between the regime and opposition throughout 2017 and devote itself to the race with the Americans over who would inherit the areas under Islamic State control. It then went back in 2018 and resolved the conflict with the opposition in the “de-escalation zones.”

For about two years, Russia ably managed its relationships with its partners in the Astana track. It was playing on their contradictions at times and taking advantage of their shared fears of American policies at others. It used Iran and its soldiers in the war and fighting, and then relied on Turkey and its proxies in policy and negotiations, as needed. But the track is about to exhaust its purposes with the increasing contradictions in the visions and interests of its members on one hand, and the various demands of the coming stage on the other. President Putin believes that this stage will need a lot of money and little war and negotiations. Turkey and Iran have no money, and do not have enough influence to legitimize the path it is about to launch, leading up to the 2021 presidential elections in Syria. Here came the decision to open a new track starting in Jerusalem, with two different partners—America and Israel.

The notion of a new path to draw a map of interests in Syria came up during Benjamin Netanyahu’s visit to Moscow in April, which ended the six-month tensions in the relations between the two parties caused by Israel shooting down a Russian Alyushin plane over the Syrian coast during clashes that occurred during one of its repeated attacks on Syrian soil in September 2018, killing about 20 Russian military personnel. Sources vary over whose idea it was to launch the tripartite track bringing together the national security advisers in Russia, America and Israel and working on a permanent mechanism to reach agreements on Syria. Putin or Netanyahu? Regardless, it seems that Israel is trying to play the role of godfather to Russian-American relations, to manage the situation in Syria, and from there the rest of the region, taking its interests into account. Putin meanwhile wants to give Israel the role of bridging relations with Washington, which Moscow needs more in order to reach the finish line in Syria and to obtain official approval for its influence and interests in the region. Until that happens, Trump and Netanyahu want to help Putin remove Iran from Syria, preserve the Kurdish gains in eastern Syria and contain Turkish ambitions in the north. In exchange, Putin wants Washington to “allow” Arab states—the Gulf especially—to normalize relations with Damascus and to fund reconstruction. The formula would be as follows: Putin would sell out the Iranians and Turks for American and Israeli interests, if it obtains Arab funding appropriate for reconstruction projects in Syria. The paradox is that in Astana, the Arabs were absent, leaving Syria to be looted for other projects. In Jerusalem, the Arab role was present—but outside the hall, and funding projects for others.