The fuel crisis currently gripping Syria is not the first in the era of the Assad regime and has led to the weakening of the middle class and the desperation of the poor reports Al-Araby al-Jadeed. 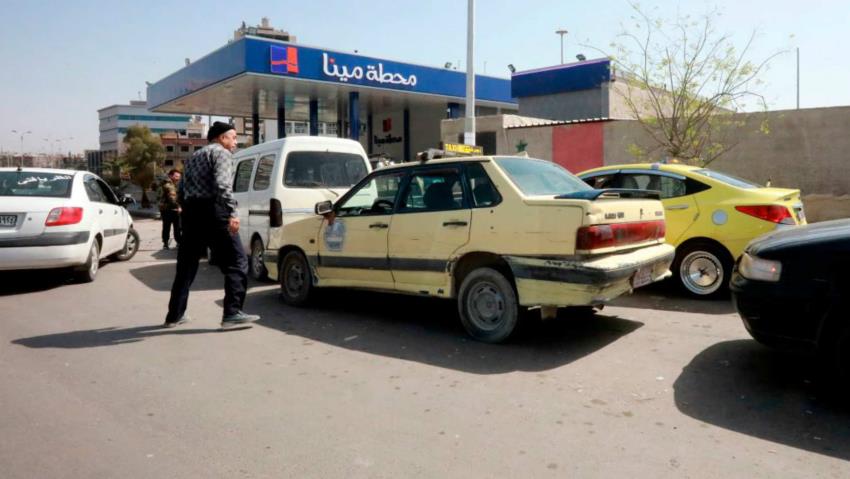 In 2008, the country experienced an equally severe situation, despite having an abundance of oil at the time. The government triggered the shortage by removing subsidies on gasoline and diesel fuel. As a result, the fuel price increased three-fold in a very short time, driven up even further by rampant corruption in the distribution process.

Ultimately, removing fuel subsidies and the ensuing crisis led to a weakened middle class, and the desperation of the poor. Many crops were destroyed, as owners could not afford the cost of harvesting and irrigation, leading to massive internal migration from the eastern regions.

In 2009, the regime reversed its decision of abolished subsidies, not because of the adverse effects on the Syrian economy, but due to the negative impact on the black market, which had been thriving on the billions pumped into it by the beneficiaries of the corrupt regime.

Their business was affected as the price of fuel increased to equal that of neighbouring countries, effectively stopping cross-border smuggling.

As the prices came down again, the smuggling resumed. Millions of litres of petrol and diesel were smuggled every day through channels controlled by Aal Shalish (one of the leaders of Assad’s personal guards), Mohamed Iyad Ghazal (the former governor of Homs), and Ahmed Abdel Nabi (the officer who announced the military coup of Hafez al-Assad).

The war in Syria did not stop the smuggling. The only change was the increase in quantities after Hizballah took control of the Syrian-Lebanese border in 2014.

As Syrians were expelled from their towns and villages along the Lebanese border, Hizballah effectively erased the demarcation line between the two states.

Smuggling rights became exclusive to Hizballah’s troops headed by Abu Hadi (a Shia Syrian from the villages of al-Qusayr). His group took a large share of the Syrian oil, including the oil coming from the Islamic State (IS)-controlled areas, and directed it to Lebanon in quantities at least double the amounts previously transferred.

What used to be a clandestine, black market-driven smuggling – usually done in small quantities, secretly and by night, under Hizballah – became a massive operation conducted in broad daylight and unsupervised by any entity, including the Syrian government.

A large portion of fuel usually destined for Syrians was now being sold across the border.

On the other side of the country, the delivery of oil purchased from the eastern regions and Iraq is in the hands of Hossam Qaterji – an agent of the regime and a member of the People’s Assembly which is under US and EU sanctions because of his conduct.

The quantities available from this source are affected by the corruption corroding the transport and distribution systems.

What does get make it through these channels is first distributed by local leaders and Shabbiha groups – ruthless militias sponsored and equipped by Assad’s government – who take the largest share of fuel for themselves at the expense of the population, including families of soldiers killed by Assad’s forces.

In the Jarmana district of Damascus for example, the regime distributed butane gas three times over the past month at a rate of 200 cylinders at a time. The Shabbiha received 60 cylinders, the local dignitaries got 70, leaving less than 40 percent for the local population.

The Shabbiha are in control of almost everything. Without their consent fuel convoys cannot access neighbourhoods. Fuel intended for Tartus villages has been repeatedly confiscated in the Mazraa area, resulting in clashes with the state security forces trying to free the caravans and their cars and drivers.

There is another factor contributing to the current fuel crisis, namely, the absence of a specialised workforce in the Baniyas and Homs refineries, which has caused a nosedive in their production capacity.

Most of the technicians who kept these facilities running were either arrested or displaced. In the Homs refinery alone, more than half of the total workforce of some 5,000 workers have been detained or expelled.

It is not only the fuel processing that has been affected in this way, most public companies and specialised private businesses have been crippled by the absence of skilled and young staff.

The local authorities – represented by city councils and governorates – cannot do anything to improve the distribution process, as they are preoccupied with other matters such as the fictitious reconstruction of various neighbourhoods destroyed by the war.

This “reconstruction” is entirely cosmetic in nature and designed to boost Assad’s propaganda effort.

The governorate council in Homs, for example has financed a competition for the few remaining students of architecture at Al-Baath University to design low-cost rebuilding of facades and public squares in several neighbourhoods.

The facades of several main buildings have been restored by installing murals of Bashar’s father Hafez al-Assad, but the interiors of these devastated buildings left untouched.

This is the only form of “reconstruction” possible under Assad’s regime; it has no funds or human resources for a proper restoration of infrastructure and residential areas destroyed in the war.

Even if foreign aid started flowing to the regime, this money would immediately disappear in the insatiable web of corruption that the regime relies on. The leftovers would be used in the same way – to restore public squares and Assad’s monuments, rather than the desperately needed infrastructure and social services.

The Syrians in Assad-held areas must realise that corruption and the absence of qualified people, many of whom are exiled outside Syria – are the main reasons for the current dire situation; not the sanctions against the regime.

Abdul Razzaq al-Hawassali holds a degree in economics from Damascus University, and is currently displaced in Turkey. He is a human rights activist and a trustee of the Syrian Association for Citizens’ Dignity.