The Assad regime is facing an increasingly tough situation as the country and its internal politics are pulled apart by Russia and Iran writes Hurriya Press. 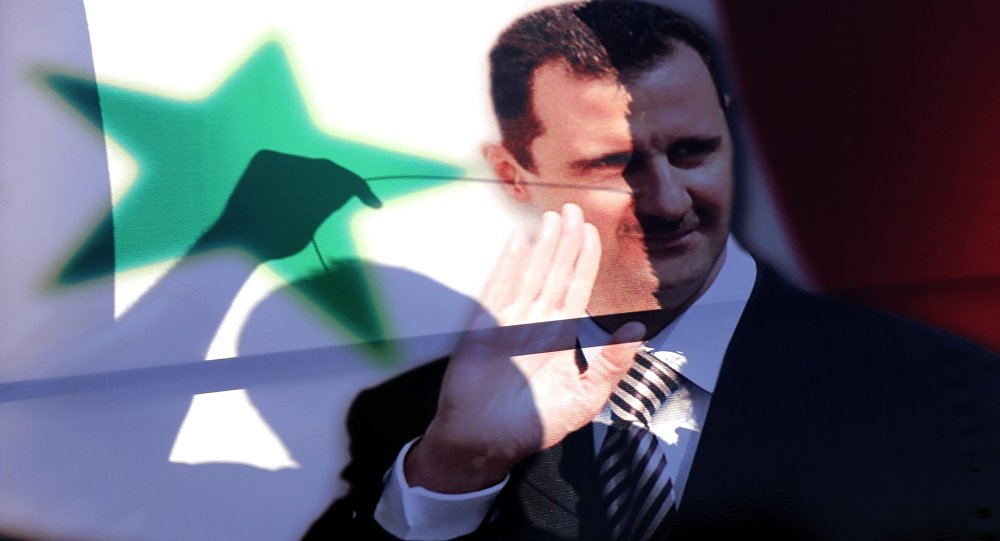 The Assad regime is undergoing a crisis that resembles what it underwent in 2011, which shook the confidence of its popular base in its ability to continue.

Faith in the Assad regime is declining as a result of the shocks that have hit it and the internal divisions between the centers of power through which foreign and regional powers are fighting by proxy, with support from local capital. Likewise, Russia and Iran have showed the regime’s head in a dim light by leaking images and positions that undermine him, so that the regime does not appear as a the victor, for example, leaked Russian statements said that, if not for Russian support, the Assad regime would have fallen within two months.

The main reasons behind the political and economic crisis, which has started to turn into a social crisis among regime supporters, is due to the American decision to tighten sanctions on the Assad regime and its prominent backer and ally Iran, as well as labelling the Iranian Revolutionary Guard as a terrorist group in an unprecedented step.

The first reason: The Americans decided to increase the number of sanctioned companies and individuals inside the Syrian regime, as well as hinting at activating the Caesar law, which imposes sanctions on all those who deal with the Syrian regime economically, military and politically, as well as imposing sanctions on the Iranians and its main military institution, the Iranian Revolutionary Guard, which is not just a military body but an economic power center within the Iranian regime. These sanctions fragmented a network of economic relations built by the regime over the war years and scared many away from dealing with the regime directly or through mediators such as loyal businessmen, whether Syrians or Lebanese. This fragmentation has led to the apperance of internal conflicts between businessmen regarding shares of contracts which have been settled for the regime, which became clear in the attack on the businessman Samer Foz and other businessmen.

The second reason: The Russian-Iranian dispute that followed the near-total stop of military actions. Both sides see themselves as the reason the regime survived and responsible for its “victory” and that it deserves to reap the reward of this alleged victory, manifested in reconstruction and control over vital facilities. This has appeared in a struggled over Syrian ports, even if indirectly, and has been reflected in the regime’s internal structure, which is divided between those loyal to Iran and others loyal to Russia, with both countries backing factions loyal to it and working to build networks of relationships inside the regime to serve their interests. These seemed to become clear between the Fifth Corps, backed by Russia, and the Fourth Division, which is led by Maher al-Assad, who is close to Iran.

The third reason: The deterioriating economic situation, which the regime’s economy is witnessing due to the years of war and the corruption that is rotting the regime’s economic and political body, as well as the security breakdown in the areas it controls and the fragmentation of the community, which was apparent in the fuel crisis, which has showed the regime’s inability to address its economic problems.

The fuel crisis also represents another form of the regime’s political crisis, as it relates to a few problems, most importantly the loss of its ability to depend on its basic partners, who responded to or were subjected to American sanctions on Iran, such as Iran or Lebanon. Egypt responded by closing the Suez Canal to Iranian ships. Arab states became reluctant to take normalization steps they had begun. The political crisis in Algeria due to the revolution by its youth also stopped economic support (supplying the regime with oil) and political support for the regime. The Syrian Democratic Forces also stopped supplying regime areas with oil and stopped smuggling it through Syrian opposition outlets in the north, which increased the blockade on the regime and caused the fuel crisis to grow, as well as the Syrian pound’s exchange rate fall.

This situation made the regime’s crisis increase and turn into a nightmare affecting the circle around Bashar al-Assad, who will try to get out one of two ways: Either fabricating internal problems in the areas it controls, which are policies that it is has pursued previously, by fabricating bombings or sectarian or social disputes; or it may work with Iran to follow a policy of escaping by fabricating a conflict with Israel through Lebanon’s Hezbollah, which has started through the media to prepare its popular base for this sort of adventure.