The French man, who claims to be the grandson of General Gouraud, says that he has come to Damascus to apologize for the crimes of his grandfather. 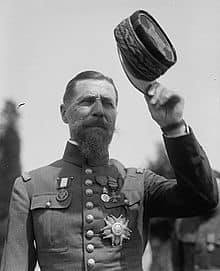 The Syrian Al-Ikhbariyeh channel carried out an interview with French writer Jean-Louis Gouraud, who was visiting Damascus. He is a well-known journalist and horse specialist in his country, and he told Al-Ikhbariyeh that he was the grandson of General Henri Gouraud, the French high commissioner who invaded and occupied Damascus after the Battle of Maysalun in the summer of 1920.

He came to Damascus, Al-Ikbariyeh added, to apologize to the Syrian people for his grandfather’s crimes.

Certainly a beautiful initiative, but…

First: General Gouraud never married and had no children.

This guest is the general’s nephew, and never personally knew him as the general died in September 1946, and Jean-Louis was born in 1943. The guest’s biography says his father was from the Belgian city of Liege, east of Brussels, but General Gouraud was from a family in the west of France, and was born and lived in Paris, and had no connection at all to Belgium. The general had two siblings—Pierre Marie Gouraud and Xavier Gouraud. Most likely, this guest is the son of one of them, and not the grandson of Gouraud himself.

Second: Al-Ikbariyeh talked about the “anniversary of Independence Day.” We do not call it “Independence Day” as our Lebanese brothers do, but “Evacuation Day.” Legally, independence was given in 1941, during the era of Sheikh Taj al-Din al-Hasani, with the efforts of the government at that time of Hassan bek al-Hakim, but France insisted on not withdrawing its forces before the end of the war in Europe. Syrians, led by President Shukri al-Quwatli, in turn insisted on the holiday not being until the last foreign soldier had departed from Syria. They refused to use the term “Independence Day” and insisted on “Evacuation Day”. The word did not come out of nowhere and wasn’t an accident—it was the desire of our ancestors and we should honor them on their 73rd anniversary.

Third: SANA said of the French guest that he was the grandson of the man who struck Damascus with artillery. It is true that Damascus was bombarded twice—first in 1925 under the mandate of Maurice Sarrail and then again in 1945 under the military governor Olivier Roger, but the bombardment of Damascus had nothing to do with Gouraud, as he left the city in 1923 to become military ruler of Paris—that is, two years before the first bombardment. General Gouraud did worse than bombard Damascus, as he occupied the country and divided it into statelets, which destroyed the newborn Syrian army, and led to the martyrdom of the hero Yusuf al-Azma.

Fourth: The man who appeared in the promo for the segment about Henri Gouraud was in fact General Charles DeGaulle—not Gouraud!