The image of a young girl, high on solvents, has shocked many people online, although cases of this nature are becoming more frequent writes Daraj. 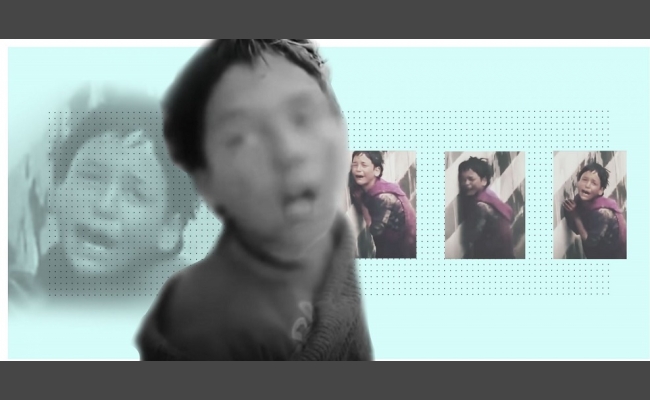 A short video has circulated over the last few days showing a child lying, almost without strength, on the edge of the Barada river in central Damascus. She wears dirty, worn-out clothes and her eyes are harsh. She breathes from a white bag containing a poisonous drug made of an adhesive substance known as “al-shoulah.” The child is lying on the sidewalk near passersby in the heart of the Syrian capital Damascus. But no one pays attention.

The person filming approaches and pulls her by the hand with some coarseness and asks her, “Why are you smelling this?” But she does not respond.

In spite of her miserable state, her browned face appears to be beautiful. But it has been afflicted by cruelty without limits. The photographer asks about her family, and she responds with an unfocused look that her mother is dead and her father is in prison and that she is from al-Shaghour.

The child, who appears no older than ten years old, speaks a few words before falling into the river and begins crying and wailing hysterically. She is saved by a passersby, but once she has been pulled from the water, the passersby leave her and everyone continues on their way. We do not know what happened to the girl after that.

The photographer was Rami al-Kaed, who works for the pro-regime Sama channel. He posted the video on his Facebook page, which includes a photo of him with President Bashar al-Assad’s son.

The photographer said that his aim was to raise “awareness and nothing more … I took the video to show officials and NGOs, to see what they can do.”

The Problem Lies With the NGOs!

The story on official sites, which circulated the child’s story, focused on the problem of gangs that are dealing the poison “al-shoulah” and distributing it among children. Of course, this media did not fail to mention that the one who saved the child from the water was a wounded person from the regime army.

What the photographer and loyalist media said and what regime sites wrote suggests that the issue has become a public debate. Some blamed the gangs and homeless children and their families for spreading this phenomenon. Some loyalist pages said that the Ministry of Social Affairs had “mobilized” to find the child.

But after two days, nothing about the child’s fate was announced.

The face of the homeless Barada child will follow us for a long time before we are occupied by yet another in the chain of the Syrian tragedy. Her gaze tells a story of the “victories” that the regime and its allies celebrate. This young person has made us see with our own eyes the shame of our generation—that is the terrible political and moral failure that has happened in Syria.

The Syrian war has been described as representing the death of the idea of democratic or humanitarian intervention. The destruction of the country has been mirrored in the destruction of the country’s human relations and social fabric. An uncountable number of people have been imprisoned—more than 100,000. Many have lost limbs and eyes, and their minds as well. An entire generation of children has been afflicted with shock and deprived of education. International reports about the children in Syria have all carried data the least of which can be describe as terrifying, in terms of the physical injuries, the social situation and psychological condition. These children face threats of increasing violations in terms of forced labor, forced marriage, malnutrition, and the lowest levels of education and health, as well as the problems of homelessness and addiction.

It is terrifying to think what vengeance this generation will sign in the future, and this is exactly what the Barada child made us see.

How can we explain this victory to the Barada girl? And how can we persuade her that all that has happened has been nothing but a “malicious plot” and that Assad and those behind him are innocent of the death of her mother and imprisonment of her father, and that the noxious fumes from the glue that fill her body is a cheap price to pay for him to stay perched in the Presidential Palace, overlooking the river where she lay.