After many years of conflict, Assad has come out on top and foreign countries are reestablishing ties writes Al-Araby al-Jadeed. 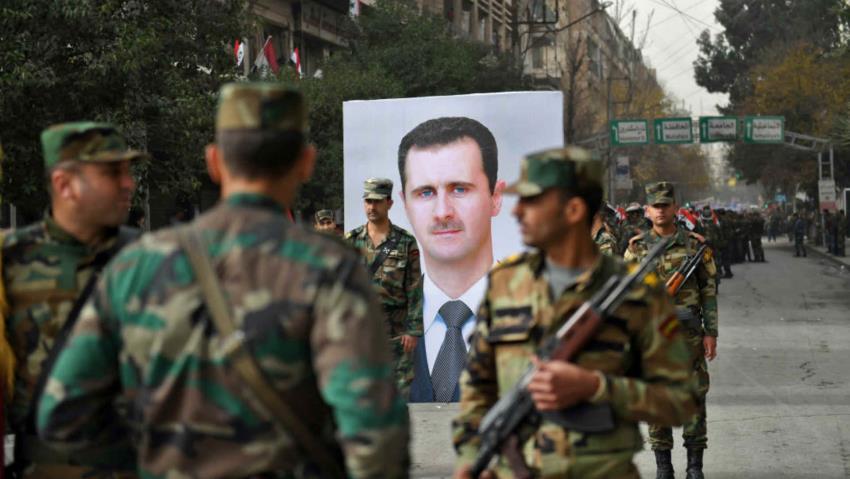 “You know what? It’s yours, I’m leaving [Syria]”, Trump said on a phone call to Erdogan, according to The Washington Post.

In the days prior to, and since the US president’s announcement a fortnight ago that the US would withdraw from Syria, a flurry of Arab leaders have moved to restore their relations with the Assad regime.

A week of PR moves saw the Sudanese president visit Damascus on 16 December, and Syria’s senior security adviser, Ali Mamlouk – a man who is wanted by French prosecutors for collusion in war crimes – visit Egypt on 22 December.

In addition, the King of Jordan stated on 23 December that “our relations with Syria will return to what they were before”. The UAE reopened its embassy in Damascus on 27 December, and Tunisia resumed direct flights with Syria after seven years. Finally, Bahrain stated last Friday that ‘work continues’ at its Syrian embassy.

These announcements may have been the work of previous under-the-table agreements, but they all issued almost identical pretext: Supporting Arab unity and confronting regional interference in Syria.

Indeed, several factors likely also contributed to these developments, including pressure from the Russians and the rocky relations between Gulf states. But Trump’s surprise US withdrawal announcement – perceived by many as the decisive sign of an Assad victory – was perhaps the encouragement Arab leaders needed to get behind the Assad regime diplomatically, and publicly state their support.

No Justice Without Accountability

Many Syrians, including victims of Assad and human rights defenders, have voiced their concerns about these developments According to Mohammad al-Abdallah, CEO of the Washington-based Syria Justice and Accountability Center. For him, re-legitimising the Assad regime sends a clear message that he can do whatever he wants to Syrians.

Abdallah adds that “at the very least, there should be a set of conditions before such normalisation, like the release of detainees, the disclosure of the fate of missing persons, and the abolition of Law 10”, which allows authorities to seize property without due process or adequate compensation.

For Abdallah, Trump’s decision has opened the doors wide to the concept that “Assad has won, and there is no use of perceiving him as an enemy”.

Joan Farso, a Syrian Kurdish humanitarian worker in Syria, says that the UAE and Bahrain’s recent decision will not help restore stability, adding that the main issues that should be addressed are reconstruction, releasing detainees, the fate of the missing persons, and forming a transitional government; one “that guarantees the rights of all Syrians”.

Restoring normal relations with Assad, without holding him accountable for the mass atrocities in Syria, or conditioning restored relations on addressing crimes and human rights violations, sends a crystal clear message to other Arab leaders that you can massacre your own people and remain a member of the international community.

Will other Arab countries also restore their relations with Assad? Can they be relied on to address the injustices the Syrian people have suffered, and continue to suffer? Will they respect international treaties when Assad’s arrest warrant is issued?

In reality, as long as Assad is power, transitional justice in Syria will remain a myth. While the perpetrator continues to control the legal and executive systems in Syria, cries for justice will only grow louder.

Many say the war is over, but that does not mean the suffering and crimes have stopped. Instead, the Assad regime has gained ground, and tightened its grip over a population it can oppress, silence, detain and kill using torture.

Justice cannot be buried under the ruins of the victims own homes, and with the bodies of their loved ones.

Today Syria has millions of victims, with the most documented mass atrocities in history. The matter is not that a person was robbed, or attacked by someone’s dog. This is a nation that was massacred, displaced, destroyed from the outside, and from within.

Ignoring justice destroys the values the Syrian society should be built on, if it is to one day be a healthy, stable society.

In addition, justice is important not just for Syrians, but for the whole world. EU countries must use their values and judicial systems to hold the criminals accountable, making sure they will not turn into a safe haven for perpetrators of war crimes, and crimes against humanity.

They must send a message that the international community will not be complicit and remain silent in the face of such brutality. This, importantly, also strips the extremists of their favourite recruiting tool: injustice.

Perhaps the rehabilitation of the greatest criminal of our times will go on, unencumbered. Rights organisations and Assad’s victims may not be able to stop this, but at the very least, they should be supported in their efforts towards justice, and blocking regime attempts to falsify history which add salt to the wound by turning the perpetrator into a national hero.

And those who so freely normalise the Assad regime should keep in their hearts and minds a tiny space to consider his victims and survivors, who will live out their lives in the shadow of his regime’s atrocities.