The decision by the US to withdraw troops from Syria marks a new low in American pragmatism writes The Syrian Observer. 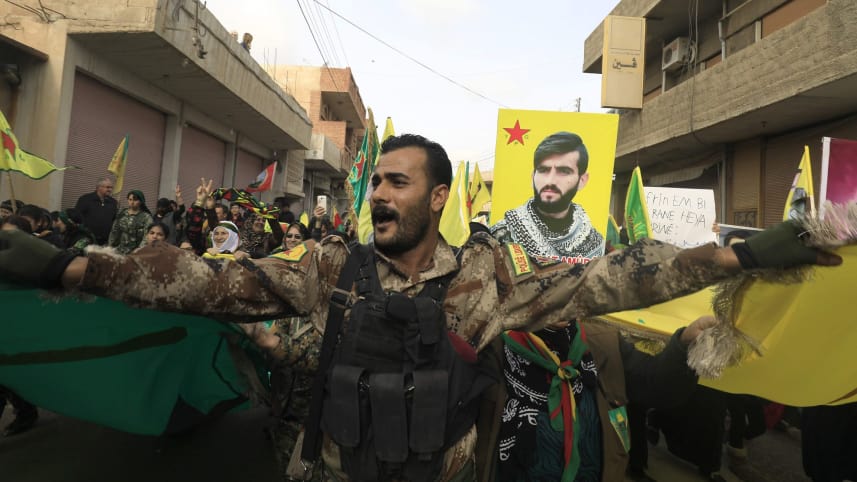 When I was ten years old, my father told me that the difference between the British and the French colonizers was that the British were loyal to their allies while the French did not care. My father was born in 1910 and died in 1992. Two decades earlier he had retired from politics and public life. For him, US Presidents are Franklin Roosevelt, Dwight Eisenhower, and John F Kennedy. The last major political event he followed was when the Watergate scandal broke. I remember him complaining to his friends in the coffee house about the deterioration of global politics. My father did not wait to see the deterioration of American policy under Reagan, George W. Bush, and Barack Obama. It was fortunate that he did not hear of the name of Donald Trump, the man who guided American pragmatism to a level of moral decay and political bankruptcy he had not previously known.

The difference between Trump’s pragmatism and the pragmatism of his predecessors is that they probably had America (or part of it) in their minds when they made decisions, whereas Trump only sees his narrow individual interests, and the surrounding family, business and fortune. He does not care about principles, does not respect values, and does not take into account friends or allies. He gave up the White House Chief of Staff, whose job was to clean Trump’s filth, and abandoned all his assistants, who were being investigated by Robert Mueller for their involvement in the conspiracy scandals tied to Russia.

However, nothing can be compared to the move that he announced a few days ago: the withdrawal of his forces from Syria, the abandonment of Syrians in general, and the Kurds in northeastern Syria in particular. He used the Syrian Kurds as a professional card player uses the joker to win a game, before throwing it aside, collecting his money, and leaving.

Was Trump’s decision a surprise? Yes and no. Yes, because Trump himself and his administration announced as recently as September a new US strategy in Syria, which required the US forces to stay in Syria, until the full defeat of the Islamic State (ISIS) and until (and please pay attention to this) the end of Iran’s role and presence in Syria. The US Special Envoy to Syria, James Jeffrey, was proud to repeat that just a few days ago.

And also yes, because most of Trump’s aides did not agree with this move, starting with Defense Secretary James Matiss, who resigned last Thursday in protest at Trump’s withdrawal from Syria as well as Republicans and Democrats in Congress. Criticism of the move came from close associates of the President and his defenders. “It is a terrible mistake,” wrote Republican Senator Marco Rubio of Florida on Twitter. “It will have grave consequences for the US & Israel & great benefit for ISIS, Iran & Hezbollah”. Trump’s ally, Sen. Lindsey Graham of South Carolina, called for congressional hearings on the move.

The Washington Post identified the winners of President Trump’s decision as being Iran, Russia, Bashar al-Assad and ISIS, while the losers were the Kurds and Israel. And of course the Syrians, in general.

On the other hand, the move was not very surprising. We never knew Trump to have a real interest in any issue, people or mission. If there is real loyalty, aside from his loyalty to himself and his companies, Trumps might be loyal to Russian President Vladimir Putin. Putin and Turkey have reached an agreement on northern Syrian, and the United States should not interfere with that agreement. In June 2017, the former US Ambassador to Syria said in an interview with Asharq al-Awsat, “I think that what we do with the Kurds is not only politically stupid, but immoral, Americans used the Kurds for many years under Saddam Hussein. Do you think the Americans will treat the Democratic Unionist Party and the People’s Protection Units differently than former US Secretary of State Henry Kissinger, who also abandoned them? Frankly, American officials told me that, the Syrian Kurds are making the biggest mistake when they put their trust in Americans.”

But that was not without a price. One day before Trump announced his decision, Turkey signed an agreement with the United States to buy 80 Patriot missiles worth 3.5 billion dollars, which was a reasonable price to dump the Kurds, leaving Syria to Iran and leaving the Kurds to Turkey. Now President Erdogan needs only to think of a greater deal that would result in the United States handing over his historic rival Fethullah Gülen. Why not? It is a world devoid of values. He lives in Trump World.