In his soon to be released memoirs, former Secretary of State, John Kerry, talks about Assad's offer to the Israelis for the return of the Golan Heights writes Al-Araby al-Jadeed. 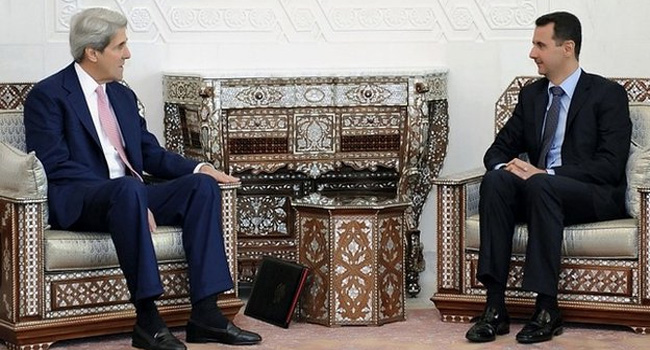 In the archives of the Arab Peace Initative, you will not find objections or reservations from Syrian President Bashar al-Assad to the initiative that was endorsed at the Beirut Summit in 2002. This initiative called for normalizing relations between Arab states and Israel in exchange for the latter withdrawing from the Palestinian, Syrian and Lebanese territory it occupies.

According to the archive records of the US sponsored Israeli-Syrian negotiations from 2000, particularly in Maryland and Shepherdstown, there had been considerable progress realized by committees of the three main issues: normal peaceful relations, water, and security arrangements. Meanwhile the committee on borders saw major problems, as Israel had a high degree of reluctance, and would not accept a full withdrawal from the occupied Golan Heights.

The story is famous for the failure of Hafez al-Assad’s summit with Bill Clinton in Geneva in March 2000 because the Israeli Prime Minister, Ehud Barak, had accepted returning the Golan except for a 500-meter strip by the Sea of Galilee, and an 80-yard strip around the eastern bank of the Jordan River. It is not forgotten that Bashar al-Assad later announced, more than once, his desire to resume negotiations with Israel “from the point where they stopped,” and said in an interview with the New York Times in 2010 that this “would reach the best results in the shortest time, especially since we have agreed to 80 percent of the points of the peace process.”

In short, the regime of the two Assads does not deserve to be described as reluctant. It has informed Israel of its total readiness to open an embassy for it in Damascus if it returns the Golan in full. Reluctance has been the character of Israeli governments, whether headed by a Laborite named Ehud Barak or a Likudnik named Benjamin Netanyahu, as it has insisted on retaining the Golan, or at least a part of it.

The former US Secretary of State, John Kerry, writes in his soon-to-be-published memoirs that when he was head of the Senate Committee on Foreign Relations in 2010 he met with Bashar al-Assad and received a “personal message” from him to US President, Barack Obama, that included his readiness to fully recognize Israel and to open embassies in Damascus and Tel Aviv, as well as other steps as part of what Kerry calls “broad concessions” in exchange for the return of the Golan Heights. Kerry proceeded to travel to meet Netanyahu and inform him of the letter (before Obama had read it) and the Israeli Prime Minister was surprised by Assad’s readiness to go further than Damascus had gone in the prior negotiating rounds.

Netanyahu’s surprise came from the extent of adulation that Assad offered toward the United States, through its appeasing of Israel with normalization and an embassy. Assad’s father had showed no objection of any detail of this if the Golan was returned after being fully occupied when he was Defense Minister during the war of 1967.

Thus, Kerry did not surprise anyone who has followed Israeli-Syrian relations, from the agreement signed in Geneva in 1974, through to Prince Fahd’s initiative of 1981, up to what deserves to be called “Rami Makhlouf’s prophecy” in 2011, when weeks after the eruption of the Syrian uprising, he said: “If there is no stability here, there’s no way there will be stability in Israel … Nobody can guarantee what will happen after, God forbid, anything happens to this regime.” This is literally as the man said it (and to the New York Times of all places).

There is no surprise, Mr. Kerry. Results usually come after preludes.