A military strike on Syria might deter the Assad regime from using chemical weapons again, but it is unlikely to be a game changer in the course of the Syrian conflict 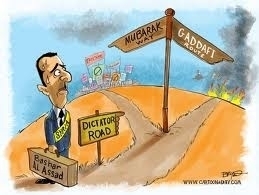 The U.S. administration has said that the attack would be a response to the use of chemical weapons; regime change would not be the aim. Obama feels the need to act to protect the global nonproliferation regime and prevent the use of weapons of mass destruction, but he does not want to get dragged into the long Syrian conflict. The exceptionally tough language that has come from high administration officials might provide a way for Obama to amplify the attack’s importance, get it done quickly, and then put it behind him.

The attack would not tie in directly to Washington’s longer-term Syrian strategy to strengthen the moderate elements in the Syrian opposition and, along with Saudi Arabia, Qatar, Jordan, Turkey, and others, to train and strengthen the rebel Free Syrian Army. That process might take many months or years to bear fruit. The strike might weaken the regime somewhat, but is unlikely to dramatically alter the balance of power.

Meanwhile, the rebel-held areas in Syria are dominated by radical Islamist forces that the United States and Syria’s neighbors Israel, Jordan, and Turkey do not favor. Some key U.S. allies—particularly Israel and Jordan—have serious fears that if Assad loses Damascus tomorrow, the radicals will be on their borders. So for Washington, it is important that the Assad regime not collapse too quickly. Rather, the goal is to temper the violence, de-escalate the conflict, and press the regime to join political talks sometime in the near future.

If talks fail, and if strengthening the moderate rebels eventually succeeds, the United States could become more serious about toppling the Assad regime. In the meantime, Washington might have a preference for upholding the basic status quo between the regime and the rebels, provided the regime refrains from using weapons of mass destruction and ratchets down its assaults on civilians—actions that trigger international action and cause destabilizing refugee flows.

The Syrian regime appears to be bracing for the attack. Because of the ample warning time, it presumably has moved whatever personnel and matériel it can out of the way of expected targets. The attack is likely to involve cruise missiles launched from naval units already positioned in the eastern Mediterranean and to target airfields, chemical plants, and other military or official command and control centers. The expectation among local media is that the attack will last for a few days (or nights)—enough to damage but not seriously cripple the regime. Some Western powers might join in the operation, but the involvement of regional powers might be constrained in order to avoid direct regional clashes.

Regime officials have been full of bluster, but they are likely to absorb the blow and not respond or retaliate in a major way. Syria does not have the capacity to intercept cruise missiles or other advanced weaponry that the United States might deploy. And if the regime can’t avoid the attack, it will simply hope the United States will get it over with and go home. Retaliation or escalation would just spur the United States to become more engaged in war in Syria, which is not at all in the regime’s interest. Washington has largely ignored the conflict for two years; the regime would like to return to that condition.

Furthermore, the regime’s options for retaliation are limited. It could attack Israel, or get its ally Hezbollah to do so, but that would only invite a large-scale Israeli attack, which neither Syria nor Hezbollah wants. Contemplating direct retaliation against U.S. forces in Jordan or the Gulf is unrealistic, and U.S. troops have already left nearby Iraq. If Turkey or Arab states do not join in the attack, Syria would not have sufficient warrant to retaliate against them.

So the regime is likely to limit its response to making much political hay and denouncing the U.S. attack. Its regional and international allies—particularly Iran and Russia—will likely join in the criticism. The regime will say that the attack proves that the Syrian rebellion is an “American-Zionist-Salafi” plot, and Damascus’s allies will decry the violation of international law and sovereignty, highlighting the inevitable destruction, loss of life, and “collateral damage.”

Although the attack might cause enough heat to create momentum for the convocation of a Geneva II meeting in the fall, the Syrian conflict seems fated to go on for several more years. The regime is content to hunker down in its areas of influence and is not interested in negotiating with the rebels; and the rebels are too divided and generally too radical to contemplate or be able to enter serious negotiation.

The imminent U.S. attack might be necessary to deter the use of chemical weapons in the future. But it is unlikely to dramatically change the course of the Syrian conflict.