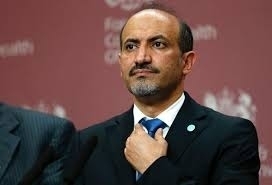 The National Coalition of Syrian Revolution and Opposition Forces presented five enthusiastic “no”s during its press conference in London. The first three are “no peace,” “no negotiation,” and “no recognition,”— the same three “no”s from the famous Khartoum Resolution of 1967. Add to those two other “no”s: “no going to Geneva” and “no silence about the international community's impotence.”

The first three enthusiastic “no”s eventually led us to Camp David and Oslo, with the Golan remaining under the occupation from 1967 until today. This is because the “no”s were unreal and were mentioned to ignite people's enthusiasm and to prop up the ruling regimes, in spite of their failure to make achievements in any of the domains typically falling within a government’s responsibilities, such as development, freedom, employment, and fighting corruption. Indeed, these “no”s were declared for local consumption only, because victory needs more than slogans.

No victory can be achieved with corruption, poor planning, and nepotism. No victory can be achieved without an independent national decision-making body, there is no victory without utilizing all the possible existing energies in the political, media and military fields. Abu Furat, Yaser Al Aboud, Al Akidi, and all those honest Syrian officers far from corruption, must lead the Free Syrian Army. It is necessary to build a political body encompassing all of Syria, whose men don’t belong to any state but to a free Syria. It must be an effective, easily–adapted body with flexible political regulations that allows choosing internal energies which are able to address the work to be done in media and political fields and to communicate with the rebels to gain their trust. In this way the five “no”s of the coalition won’t meet the same fate of the three “no”s from Khartoum. The claim that the current coalition is the only representative of the Syrian people's will is very far from humility and does not reflect the Syrian reality.

There is a need to call for a Syrian national conference that includes everyone—meaning politicians, military forces, revolutionaries, both fighters and peaceful activists, and anyone who believes in a free, civil, democratic, and pluralistic Syria—to exchange opinions and candidly put the facts on the table in front of everyone without embellishing or lying, and then to develop a political-military plan based on these facts to salvage what remains of Syria, with or without Geneva, via peace or war. Our home is being lost, its unity is threatened, our people are homeless, our children are without schools, our daughters are in the cellars of torture, and millions of our people are under siege, hunger, and oppression. The regime’s allies continue supporting all this without limits, while our allies seem reluctant and their support for us stops at mere words and a few weapons that are only sufficient to continue the fighting, not to achieve victory. If we don’t admit these facts, then we are committing a sin against our country and our people –which amounts to a crime against those we love.