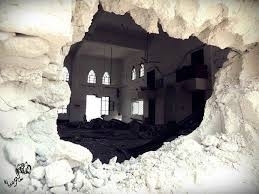 The longer the war in Syria lasts, the lower the humanitarian ceiling becomes, and the system of values that binds the country together disintegrates.

Previously-held concepts may deviate, change or reverse meaning. Realities may impose new concepts on people's behavior and style of thinking. Motivated by need, and justified by merely maintaining an existence, life is reduced to a loaf of bread that requires obtaining a waiver. One returns to the first instinct of survival.

Maybe it is too early to analyze the social transformations and changes in the system of societal values at this time of the crisis. But it is natural to pay attention to these phenomena and monitor them as warning signs of the degradation of society if the crisis is prolonged, and how these behaviors damage the heart of social culture.

If the goal of peoples' revolutions is a coup against the existing system with all its political, social, economic, educational, administrative and judicial bases, in addition to the prevalent values ​​and systems and forms of thinking, what is happening in Syria is difficult to rank and characterize because of the distractions and interferences that have occurred during the community rebellion which yearned for completion of revolution.

There has been a tremendous quantitative accumulation of errors, deviations and distortions that have occurred in Syrian society, not only in the past few decades, but because society was barely cured of the legacy of long eras of colonialism before it was subjected to a political experience of repression and corruption that burrowed in to all corners of life, establishing negative and destructive values ​​which people had no choice but to rebel against.

But the current reality deserves deep reflection and the need to monitor changes that occur in people's behavior and thinking and their changing value systems.

If corruption has burrowed into the past, protected by powers related to the political, security and financial systems, then turning the concepts associated with these systems ​​into other concepts that destroy integrity, altruism, loyalty and devotion, duty and compassion and many others, make the meanings of corruption of fraud, bribery and fraud attractive. Those who reject or fight them become stigmatized as stupid.

If these are the features of the previous phase of the uprising of the Syrian people, the current crisis, with no solution on the horizon, misrepresented the society to other more dangerous levels.

The form of community in the Syrian cities has changed because of the effects of war and partly, the obscene price rises that have manifested slowly on the behavior of people and their thinking.

If we exclude the phenomena that were originally present, but have been exacerbated (begging for example), we see that exchanging materials between people tends to lead to greed, exploitation and fraud. The salesman allows himself to control the prices of his commodity, and the excuse is ready: the crisis. Fraud has become natural, as when the citizen buys an expired commodity that carries a new label with a new expiry date, or when the price is replaced by a new one, all done without any control or monitor.

The darker side to all of this is the sale of the relief subsidies for the displaced people from the affected cities, either by the supervisors of the delivery process or by some of the displaced people who register their names in several areas in order to obtain additional shares, taking advantage of the corruption plaguing the state.

It is common now to impose a surcharge on goods because the checkpoints on the roads between the provinces impose a royalty on vehicles transporting goods, such as when Great Britain was imposing fees on shipping.  The Syrian checkpoints are kings of road, barriers of the regular army and the barriers of the battalions of the opposition.

Because values ​​fall in crises of this kind, people at first refused to buy goods suspected of being stolen from the properties of their Syrian brothers, but now, the continuation of the crisis and its growing psychological effects and the uncontrollable markets led people to overlook these concerns and and accept commodities even if they were sunk in blood.

Price rises push people to reduce the quality of their relations and to give up the features of their social character, culture and customs carried historically through spoken and written literature and through collections of poetry and folklore.

The neighbor is no longer in his respectful position defined by religion and custom. He has turned into an enemy, getting uglier and increasing aversion with the progress of the crisis, especially if he is from a different sect.  If he is from the same sect, it is likely that he will become less interested and merely an opportunist and rival. Hospitality is no longer probable, except in rare cases, because it is too expensive

The crisis has also reflected on family relationships, as the first effect of the crisis was to bring brothers to rift between supporters and opponents. There is no longer control over the family; even a father is no longer able to unify his family and bridge the cracks between his children. Mothers, despite their warmth and affection, are also unable to carry out this arduous task. What remained of the Syrian family and its relations is destroyed.

Apart from the direct violence that began to control the behavior of people, especially children, violence is occuring in speech. New vocabularies have entered people's speech, adjectives that carry accusations of treason and bullying and murder: Shabbiha, spy, follower of Arour, follower of the regime etc, or in action vocabularies like "I swear I will kill you."

The social fabric in which individuals of all religious, sectarian and nationalist affiliations co-existed, turned into distorted complexities based on background classification of citizens according to their affiliations, which makes members of the same community or group identical to each other to comprise one body isolated from others. There is fear of the other, which increases a sense of isolation, and also leads to the emergence of the need for regulatory controls for relations of community members, in a way that reduces the motivation for coexistence.

These features, which began slowly and hidden have now become overt and are worthy of contemplation and study.

These new features will turn into a new system of values, governing the behavior of society in Syria, which carries the possibility of impoverishing the spiritual nature of a society and will reflect on Syria's future.

All this is happening in the absence of any official role by the government and its concern with the security situation. The regime, in parallel with the battalions of the opposition which control some areas of Syria and impose their anti-freedom and anti-intellectual agenda, exclude the social and intellectual elite from the society.

Translated  and edited by The Syrian Observer