If Geneva II is to be held this January, it would come up with nothing more than initiating a series of fragile, futile negotiations 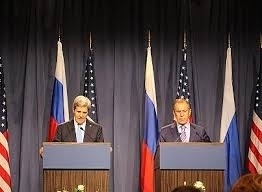 After months of delays, the United Nations has finally set January 22 as a date for "Geneva II," a conference meant to broker an end to the Syrian war. Until recently, too high expectations have been set about this event, as the conference was hoped to achieve two main things.

First, the conference would bring its participants to reject the use of arms and violence in the current conflict in Syria. A ceasefire could consequently be reached in some of the country’s troubled areas (perhaps 40 percent of the fighting fronts, at best). This would eventually allow a peaceful political strife to replace the current armed one.

Second, Geneva II would lay the foundation for a transitional ruling body, consisting of a cabinet and a presidency. The current regime, the opposition and other political bodies would all take part in the process. Powers would be shared in a way that prevents any party from overthrowing the agreement. The majority of Syrians would feel they are well represented in the ruling body, which would be expected to move the country from tyranny and violence to peace and democracy within a preset term of office.

Such hopes existed as many thought Russia and the United States, the most influential players in the Syrian crisis, were probably aware of the risks a continuous Syrian conflict might entail. Obviously, the Syrian political scene is shattering and diminishing; many Syrian provinces have already turned into warlord turfs; and Syria, a critical country in the region, is turning into a failed state, amid a number of unstable countries, some of which are not even fully fledged.

Despite the clarity of these risks for the majority of observers, Russia and the United States don’t seem to realize the gravity of the situation. They are perhaps indifferent to the damages such a situation could possibly carry for their own direct and indirect interests. They appear to believe they can bring the situation under control at the right time. But the crisis is becoming more and more complicated and out of control with every day that passes by without a serious attempt to find a solution. Each is perhaps too proud to expose its fears to the other, and is waiting for the other to express concerns first and plead with the other to help solving the problem.

U.S. Secretary of State John Kerry visited Moscow on May 7, 2013 with the Syrian file being the main topic for discussion. It was then that the two parties agreed to hold Geneva II. Since then, however, the Russians and the Americans have failed to hold a second meeting on Syria. Now, it seems, they have agreed to suspend what Geneva II was supposed to achieve, replacing that with a mere negotiation process. Apparently, they will go to Geneva on the date set by the UN, only to renege on what they had committed to before: “working to make the conference a success even though it has to be delayed.”

If Geneva II is to be held this January, it would come up with nothing more than initiating a series of fragile, futile negotiations. On the regime’s side, there would be a delegation with a clear reference, but no authority to make decisions. Across the table, there would sit a heterogeneous opposition delegation with no unified reference. The latter would be fluctuating in position according to the situation on the ground; it would be, therefore, incapable of making decisions too.

The US- Russian disagreement over Syria sprouted up in mid-2011, when President Obama said Bashar al-Assad must go. At first, the disagreement was over who was going to rule Syria after Assad. However, it is now over the size of the share each would have in the post-Assad ruling body.

In the meantime, the Syrian regime, the Syrian opposition and the rest of international and regional players have been doing nothing but fueling the crisis and consequently sharpening the US-Russian differences over Syria. There is no sign that these players will stop doing so, before a clear-cut US-Russian agreement is reached on Syria.

If Geneva II is to be held this January, it would change nothing, unless the US and Russia stop acting as mediators among the conflicting local and regional parties. They should agree on the nature of their joint “custody” of the Syrian future. To do so, the two super powers need to give up their current standings. They should realize that, if they don’t take action, the Syrian crisis can and will eventually spill over to neighboring countries and other regions, including Egypt and Turkey. It is crucial that each of the two concedes some of its ambitions. Moscow should understand that Washington would block any solution that does not give her a share in a future Syrian government. Washington should think the same way towards Moscow too.

It is bitter to see our fate being determined by others. But we, Syrians, shall accept that, as we have failed to lock our conflict within our own borders. We have misused our three-year-old uprising, and couldn’t manage to preserve it for few more months until it is strongly rooted. We have been unfortunate to have a brutal regime. What more unfortunate, however, is that the world is missing leaders who believe that international peace stems from peace within local communities, and realize the risks of advocating armed conflicts, especially in countries that lack free civil and political activity. It is time for us, Syrians, to see the reality, so we can perhaps prepare for restoring our role in solving our problem, the role from which we have been excluded from, to become mere observers of a Syrian cataclysm.