Assad, preoccupied with his fireworks display on Syrian land, suddenly feels that his mission will end and his grasp on power will not last 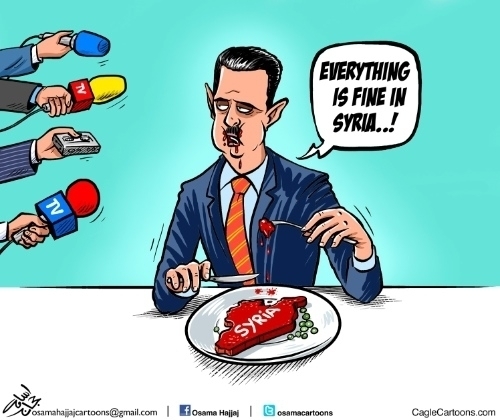 As the date for the Geneva 2 talks closes in, Assad is increasing the pace of his insane bombing of civilians as if he wants to kill the maximum number Syrians and destroy Syrian civilization— a harsh punishment for those who oppose him. Assad will teach the world what a dictator and a serial killer can be.  He is the man to tell the world, after the war, how a dictator in the shadows of a universal conspiracy involving everyone but him, can carry out the genocide of an entire people under the eyes and ears of the whole world.  Assad is inflicting the destruction we are seeing, leveling entire cities along with the inhabitants who cannot flee and are determined to preserve their land and homes. Assad does all this while the civilized world is watching and drinking out of crystal glasses.  They are enjoying the scene, just as bloodthirsty beasts do.  Assad knows the blood he is spilling will satisfy their egos… Yes, the ego of the bloodthirsty civilized world.  Assad fully knows that he is satisfying their lust for blood, and he knows that Syrian blood is dripping from their faces and falling to the ground.

Though it is their duty as the civilized world to come out against Assad’s action, they wipe their faces and lips clean of all traces of blood. Those in the civilized world come out in rallies or on live TV to condemn what Assad is doing and demand his punishment. But they are comfortable with the biggest blood sucker, the arrogant Russian and the world’s number one Mafioso, who uses his [UN] veto while patting Assad’s back and saying, “Bravo, Oh spoiled child! We want more blood! Don’t worry, we’re here to support you. We’re capable of using our veto in the Security Council. In fact, we’ve used it to your advantage more times than the total number of all vetoes from the [other four] permanent [UN Security Council] states combined in all the years since the establishment of the United barbarous Nations.”

Strangely enough, no one admits that what Assad is doing is wrong. He is, after all, a blood-sucker and blood suckers are always thirsty for fresh blood. They support him because they are like him; they are, in many ways, always thirsty for the blood of their people. The shocking thing about all this is that what is happening on Syrian land didn’t stir the people of the free world to stand up and speak their mind. Nobody stood up to say that enough was enough. Never in history had we seen such deliberate blindness worldwide to these horrific massacres being carried out against the Syrian people without any objection. Everyone is watching the destruction and the rivers of blood from the comfort of their own homes as if it is some rat-borne plague that is doing the killing.

When the first veto was used by the Russians, Syrians expected that the people of the free world would mobilize and condemn the killings and the destruction—but no one has lifted a finger.  The killing continues and the cheers for the murderer continue, delighting in the situation as Assad continues to kill.  In fact, Assad is diversifying his killing methods, and Syria’s neighbor, Israel, is satisfied because he is giving it the excuse to use Assad’s killing methods in the years to come. If no one is condemning Assad’s methods of killing, why would they denounce using the same method in Israel?

Israel, that state coming from beyond humanity, a state without culture, without past, wants to make history. It will never write a history like Syria’s. This is why Israel is asking the world for the destruction of Syrian history. Because the world listens to what this state is saying, because its holy book is based on hate, destruction and death. Israel wants to tell the world: Jehovah is not wrong for his love of blood. Humanity, since eternity, since Cain, is fond of bloodshed.  Consequently, it will leave desolate land behind to build upon its state, its great empire, the state of greater Israel.

Assad, preoccupied with his fireworks display on Syrian land, suddenly feels that his mission will end and his grasp on power will not last. Perhaps he considered stopping for a moment.

Maybe Assad thought about stopping for a moment. Maybe he considered reconciling with his people and seeking their forgiveness. Alas, his obsession with the bloody game, his mania at the sight of blood-speckled decapitated heads flying off, is driving him to pursue his quest for more destruction.

Every time some state’s popular conscious rises asking for international investigation, whenever some president condemns the atrocities committed, every time is a bullet is shot into Assad’s chest, and even when the shots multiply and the condemnations increase, Assad’s attacks also increase. He has deliberately targeted civilians as revenge for their dissent against him.  He became like a bird in its final dance, slaughtered in pain.

Assad is aware of his imminent death. Let him dance his last dance. Let him savor the seeping blood on the walls, let him dance just like a slaughtered bird. The end is near, Assad will not die before savoring yet another chalice of pleasure.

No one can assert that the end is near. The issue is beyond the control of anyone but Israel, the neighboring state that will decide when the wars will end, according to its plan and the way it wants things to be.