The issue of combating terrorism which the regime insisted was addressed to the Americans and the Western world in general, not to the Coalition 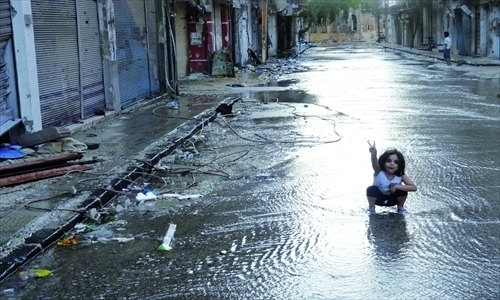 It is true that the delegation of the Syrian opposition, represented by the Coalition, went to the second round of the Geneva 2 negotiations without any convincing program or strategy to resolve the Syrian crisis. But they had certain things that they requested from the regime’s delegation, such as for Bashar al-Assad to step down from the presidency, and for the dismissal of a number of the pillars of his regime and family.

On the other side, the regime’s delegation had nothing to request from the coalition’s delegation to resolve the Syrian crisis.

Even the issue of combating terrorism, which the regime’s delegation insisted on and fiercely defended, was addressed to the Americans and the Western world in general, not to the Coalition.

Combating terrorism is not an incidental issue for the regime’s delegation, because the Russians proposed it as a title for Geneva 2 after the announcement of the conference date. And Mr. Sergey Lavrov, the Russian foreign minister, promoted and supported this issue some time ago when he called on both the Syrian government and the opposition to cooperate with each other to confront terrorism.

Washington didn’t ignore this new Russian trend, so it rushed to support certain armed groups in some northern areas to fight ISIS (the Islamic State of Iraq and Al-Sham), so it could say that among the armed groups opposed to the regime on the ground, the strongest are the moderates who are fighting ISIS, although they are led by the “Islamic Front.”

America also asked the Coalition to disown “ISIS” and accuse them of being a terrorist organization organized by the Syrian regime, and that they (the Coalition) are confronting terrorism through the Free Syrian Army.

Fighting terrorism is not a subject for the regime to continue disputing or to buy time, it is a Russian strategy through which Moscow aims to retain the current regime, upon which it imposes almost absolute control.

This strategy required serious work programs that have improved the regime in order to show that the Syrian reality is nothing more than a conflict against extremist and terrorist groups. For this reason, its forces have attacked many areas controlled and seized by the armed groups, and seriously opened the door to those who want to hand over their weapons, in addition to the truces and cease-fires it made in many areas around Damascus.

These things were done by the regime to tell the Russians that most of the organizations and groups attacking the Syrian regime forces and controlling the battlefronts now are terrorists. So the regime will treat them harshly, unlike its merciful treatment of those misled groups who, realizing the role of the terrorist groups, began to respond to the decreed general amnesty. Thus, terrorism is the biggest danger in Syria now, and it comes above all other demands, although all of them are correct.

This requires the international community to assist Syrians in combating this terrorism that threatens the international peace. Despite the initial agreement on any formula for the transitional period, the coutry’s dangerous situation nowadays makes it unlikely to dismantle security and military institutions, restructure them or even make any changes to the composition of their leadership because this would provide an opportunity for terrorism to spread and prevail.

Accordingly, any opposing components can participate in a broad-based government that doesn’t affect the sites of the Syrian authority’s leaders. All the other matters can be discussed later after the complete elimination of terrorism in the country.

By this strategy, Moscow wants to permanently close the door in the face of Washington’s ambitions to participate in the guardianship of the ruling regime in Syria, after it bet a year ago that it would gain this guardianship completely. So, Moscow wants to draw the possible horizon for Geneva 2. But we are afraid that the end of the second round of the negotiations is a declaration for the resumption of a new cold war, through which Moscow wants to share Washington’s global sovereignty.

Washington is not the only party aware of this Russian trend while failing to stop it. It seems clear as well to the European decision-making circles who will, within days, declare their attitude about this confrontation. They will either continue standing within the axis led by the United States, and thus agree to enter into a cold war for which Syria will not be the only battleground, or they have to face both the Russian recalcitrance and the American arrogance to defend their countries and interests, which could be threatened directly by the growing extremist groups in Syria and the rise of such groups in other countries such as Iraq, Lebanon and Egypt, which means they may spread beyond these frontier.

It is equally dangerous to accept the discourse of the Russian-supported Syrian regime, which considers combating terrorism as the core value on which the ruling regime is based. This will contribute to making it a fascist regime based on dividing Syrian society into two main races: the “Syrian” “race” and the “terrorist” “race”. It will also establish a sectarian division that will be difficult for the countries of the region, as well as the international community, to remove, or prevent the tragic consequences of it for long decades.

Even though we are aware of the growing prevalence of extremist groups and their great danger that threatens the structure of our state and the composition of our political body, we, however, as Syrians, can’t accept the regime’s discourse that considers combating terrorism to be a foundation upon which the ruling regime in Syria is built, even in the transitional period.

Unlike the civil peace or rejection of violence, fighting terrorism cannot be the high value that Syrians can get together around. It is just a periodic program for a government. We can’t establish a ruling regime or build a state on the basis of fighting terrorism, regardless how dangerous it is for the country. We mustn’t contribute to turning the regime fascist, even if it doesn’t have any plans to be so.