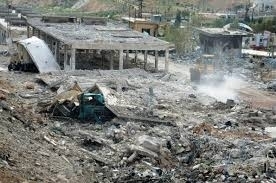 Since 2011 and, presumably, until recent Ukrainian events, the situation in Syria was one of (if not the most) widely discussed topic among Russian policymakers, political analysts and journalists. However, initially, most of them  missed the beginning of the Syrian conflict. The demonstrations and first clashes of 2011 were considered as nothing but the echo of the Arab Spring in Tunisia, Libya and Egypt. None believed that these acts of civil (and, originally, non-violent) unrest would be able to evolve in something bigger: traditionally, Russian experts considered Syria as one of the most stable countries of the Middle East whose population had little inclinations to violent actions. However, this perception had changed by 2012, when the Syrian opposition found capabilities to organize itself in a military force able to challenge the official authorities. That was the first time when Russian media sources started calling the events in this country “an uprising” against the non-democratic regime of Bashar Assad.

Yet, term “uprising” was swiftly replaced with term “civil war”. This happened due to a number of reasons. First of all, Moscow gradually got interested in the support of official Damascus, and it was not ideologically correct to call Assad’s opponents “revolutionaries” (a term which in the Russian language has the positive meaning). On the other hand, the subsequent events of 2012 and 2013 clearly demonstrated that the Syrian conflict is much more complicated than it was initially seen, and the forces striving to change the ruling regime are not always driven by the fight for civil rights.

Today, when characterizing the events in Syria, Russian experts and policymakers simply call them a “war” and emphasize the multidimensional nature of the conflict. Started as a straggle for greater civil freedom, currently, the Syrian conflict is mostly fueled by old blood and religious feuds dividing the country’s society in Alawites, Shias, Sunnis, Christians and Druzes as well as in Arabs, Kurds, Turkmens and others. This, in turn, prevents the analysts from calling the conflict a revolution. The fact that the hostilities have already spilt over the country’s borders to Iraq and Lebanon also does not allow considering this conflict purely Syrian. Moreover, the involvement of the Western powers, Russia, Saudi Arabia, Qatar, Turkey and Iran in confrontation make some experts speak about it as a war by proxy. Thus, neither Iranian authorities nor the governments of some Arab countries of the Persian Gulf conceal that they actually fight against each other in Syria. For them, this conflict turned into the battle for the influence in the region. Somewhere in the back of their mind, the Russians also see their efforts in Syria as an attempt to revenge the Americans for their negligence to Moscow opinion on the situation in Yugoslavia in 1999, in Iraq in 2003 and in Libya in 2011. In both cases, Syrians are considered as just means in the third countries games.

The biggest concerns on Syria are related to the growing role of Islamic extremists in the conflict. Their active participation in hostilities turns this country into another front of the global jihad. We became the eyewitnesses of how Syria turns in the ground for networking between different international extremists grouping. Previously separated and scattered around the world they gradually understand themselves as a united front. It is possible to assume that upon the return of these radicals to their home countries, their connections together with their battle experience will be used to destabilize the situation there.

All in all, the current situation in Syria seems to have reached a stalemate. The bloodshed continues, and it is not a secret that no minor role in this is being played by external forces. The multidimensional nature of the conflict makes the belligerents wage relentless struggle against each other without any thought about reconciliation. This, in turn, may prolong the war for quite long tame. Under these conditions, no assumptions and predictions on the outcomes of the Syrian confrontation are possible. The only one thing may be stated for sure: Syria which we knew for many decades has gone forever.