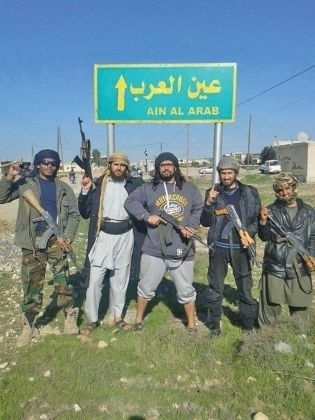 Artillery shelling, mortars, suicide bombing, tanks, aircraft bombing, Apache helicopter strikes. Who would have imagined that Kobani would live through all of this, and for what?

The answer to this question, posed by the field activist from Kobani, Mustafa Abdi, is not easy. Attempts to answer it mean opening the doors to a place which only residents know the full story of.

The place is a model for self-management, where the existence of the state is at its minimum in all aspects, except in terms of security.

The people of Kobani are known as explorers in Syria, where over thousands of years, well drillers spread to all the region. They spread from the south to the north of Syria, even reaching Algeria.

The industrial cities in Aleppo attracted a large number of young workers from Kobani to work in arduous jobs that the youth of Aleppo wouldn't do, such as in the brick industry and other construction.

Kobani is a place where all the contradictions of the East and the West met; ISIS is just the latest link in a huge chain of local, regional and international contradictions, to the extent that one thinks sometimes that the content of the conflict is essentially between Egypt's Abdel Fattah al-Sisi and Mohammed Morsi.

A series of contradictions

While the fighters of ISIS were raising their flag on a hill in Kobani, Turkish soldiers in their military vehicles on the border were turning their backs to the flag. The scene embodies the Turkish position expressed by Turkish Prime Minister, Ahmed Davutoglu, in an interview with CNN.

"We will not interfere on the ground as long as the American strategy does not include the intervention against Syrian President Bashar al-Assad," he said.

It is this attitude that takes us directly to the deficiencies of airstrikes against ISIS in the areas surrounding of Kobani, and makes the need for Turkish intervention inevitable.

But it also means that the contradiction between the visions of Turkey and the coalition is not limited to the details, but in fact lies at the heart of the American experimental strategy, which wants to first eliminate the enemy who slaughtered Western hostages, without specifying its allies on the ground.

Furthermore, the small town of Kobani cannot be crucial in deciding the fate of Assad.

Despite the general unity of the Kurdish position, as shown during the course of the battle, the political disagreement between Kurds runs deep and it goes back more than two years, when applying the agreement sponsored by the Kurdistan Regional Government of Iraq (the Hewler Agreement) which required the sharing of management between the Syrian Kurdish parties, failed.

Consequently, the Democratic Union Party and its military and administrative institutions remained the only effective power on the ground. Given that the party is linked to the ideology of Kurdistan Workers Party (PKK), the party which came out of the equation was the other parties which revolved in the orbit of the Kurdistan region of Iraq.

Tensions between the two sides are reflected in the socio-economic situation as well. A problem emerged at the border crossing which links the Kurdistan of Iraq with the Kurdish region in Syria (the Semalka border crossing).

The rift deepened to the extent that PKK prevented its rivals, loyal to Messud Barzani, from bringing a military force trained in Kurdistan of Iraq to participate in the battles, unless PKK were given full power over it.

Today, in light of the ordeal faced by Kurdish forces fighting under banner of PKK, the forces loyal to Barzani, numbering a few thousand, seem poised to play a role through the gate of "liberating Kobani". Because of the good relations between Barzani and Ankara, it is almost certain that this force will be accepted by the Turkish side in any action that might target the expulsion of ISIS from Kobani if the city fell.

Furthermore, this force is obliged to cooperate with the Syrian opposition which is controlled by the Muslim Brotherhood.

This untold Kurdish contradiction is covered in Barzani's calling on Turkey to allow his troops to enter Kobani through Turkish territory. The call will not be met by Turkey, which did not move a finger when Irbil was about to be invaded by the fighters of Baghdadi.

The ongoing peace process between Turkey and the PKK, led by PKK leader Abdullah Ocalan, hasn't alleviated Turkey's worries about the PKK's power in the Kurdish areas along the border.

To weaken the military wing of PKK, Turkey overlooked the expansion of ISIS, and in some cases, provided it with indirect support either by allowing charitable organizations supportive of the organization to operate freely in its territory, such as the Organization of Muslims Youth and al-Furkan Association, or by facilitating the spread of ISIS on the border, even when ISIS raised its flag there.

ISIS fighters became a tool to reduce the strength of the PKK in Turkey and to weaken PKK's negotiating position in the peace process as a prelude to terminate the talks if the PKK lost its ability to threaten Turkey, even if this led to a humanitarian disaster, such as the one suffered by Kobani, or to uncontrollable protests in the Kurdish cities and neighborhoods within Turkey.

To deprive the PKK of additional gains, Turkey signed a Faustian "deal with the devil", as the former member in the team of policy planning at the State Department, Henri Barkey said. The deal is that Turkey is ready to receive many refugees, despite the fact that it costs a lot if this would mean that Syria's Kurds would be defeated.

If we review the details of the demonstrations in Kurdish cities in Turkey, we will notice that a religious group participated in the suppression of the protests, called the Huda Bar Party, formed from the remnants of Turkish Hezbollah Party, which involved in the elimination of hundreds of Kurdish cadres in the 1990s.

According to the program of Huda Bar, which participated in the previous municipal elections in the Kurdish areas, it has ideological crosscurrents with the Muslim Brotherhood, a fact that has not been denied by the party official in Diyarbakir, Widad Turgut. Erdogan hopes that this Islamic party will compete with PKK for Kurdish votes in Turkey.

Since the first day of the strikes on ISIS locations in Syria, it became clear how fragile and improvisational the American strategy is, which has no ally on the ground.

The criteria – non-religious armed force that controls wide areas – solely applies to the Kurds. However, Washington did not show any intention to take advantage of this, probably to avoid the Turkish wrath in the first place.

This is one of many errors committed by President Barack Obama that has caused an aggravation of the crisis in Syria.

Since Turkey is a close ally of the Muslim Brotherhood in the Arab countries, especially in Egypt, Turks are keen to do all what they can to thwart the Coalition, which includes Arab states against the policies of the Brotherhood.

So the battle in Kobani has become a battle for Turkey, for the Brotherhood in the region, and a battle to reduce the role of its Arab rivals in the Coalition. This requires ineffective air strikes that won't save Kobani.

Davutoglu says the strikes are useless without the ground participation of Turkey, and this participation is conditioned on the Coalition's fight against the "Turkish basket" of terrorist entities, namely ISIS, Assad's regime and PKK at the same time, and if Turkey participated in the operation, it will try to drop the Brotherhood from the basket of terrorist organizations.

The global interest in the battle of Kobani is not a directive media made ​​to cover up the plight of other Syrian cities, nor it is a positive international discrimination for the Kurds, as Tomahawk cruise missiles are not launched according to the degree of "love". The global interest shows the contradictions plaguing the city, which is under the military siege of Turkey and ISIS, with an open sky towards the vast products available from arms companies.