Moscow, Tehran and Damascus hope that fighting ISIS will help restore the regime’s legitimacy and Iran also wants a place in the new regional system that is emerging 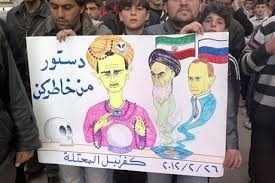 The international and Arab coalition has set off on their mission, but their path is meandering and their task is clearer in Iraq than it is in Syria. No one agrees on the mission’s ultimate goal. America launched it, some allies are fully on board, some are hesitating, and others are just maneuvering. But American President Barack Obama set it in motion, and will certainly not be the one to stop it.

The only goal that has been agreed upon is the defeat of the Islamic State of Iraq and Syria (ISIS). The members of the coalition differ or clash in their points of view on any additional goals. It was difficult for Shiite Iran to publicly join an alliance against a Sunni extremist organization, though it allowed the alliance to get its footing by removing Nouri al-Maliki and including Sunnis in a consensus government headed by Haidar al-Abadi. Iran entered through the back door – the alliance did not receive its mandate from the UN Security Council, but from Special Resolution 2170 to fight ISIS and the Nusra Front. The intervention’s legitimacy came from the government of Abadi in Baghdad, and through Tehran’s approval rather than Russia’s. The Iraqi government requested that the international community assist it in “the war on terror” in Iraq and hit terrorist safe havens wherever they may be, without mentioning Syria by name.

Tehran wants the alliance to rehabilitate the Syrian regime, as the resolution of the chemical weapons issue has changed the “regime change” equation and allowed the Assad regime to survive through this year’s presidential elections. Moscow, Tehran and Damascus hope that fighting ISIS help restore the regime’s legitimacy, and Tehran also wants a place in the new regional system that is emerging.

If there is another incident, the Syrian regime may publicly join the fight against terrorism. Yet certain members of the coalition stipulated that the regime must not join the alliance in their fight, and others want to remove President Bashar al-Assad from power. Some Arab countries received written guarantees stipulating that the regime will not fill the void created in Syria by ISIS’ defeat, and these countries have adhered to Washington’s written guarantees for fear that Obama will change his mind in the middle of the road, as happened last year, following his decision not to stage air strikes against regime centers after the massacres outside of Damascus. They also want Obama to adhere to his commitment to a training program for the Syrian opposition, and to the release of the half billion dollars that Congress approved for that purpose.

For his part, Turkish President Recep Tayyip Erdogan has invested in regime change in Syria, and has disappointed Obama more than once. Erdogan decided not to join the coalition in a binding way until he knew its ultimate goal, and it is clear that Ankara wants the alliance to make the overthrow of the Assad regime its primary objective.

Ankara was not convinced when it was claimed that the “rules of engagement” meant that the coalition’s use of fighter jets in northern Syria imposed a de facto no-fly zone, and instead suggested the establishment of a “safe zone” in northern Syria under the protection of the NATO surface-to-air missiles located in southern Turkey. The Turkish government argues that “a safe zone for Syrian refugees must be established, as the war on ISIS will displace hundreds of thousands of Syrians to the more than a million and a half who are already displaced.” Turkey also does not mind seeing ISIS and its Kurdish enemies fighting on the Syrian side of the border. It also asked for incentives to allow the Syrian opposition to be trained on its territory and to take additional measures against the jihadists. Ankara is looking for a commitment from NATO to protect the alliance’s southern borders and counteract the warning from Tehran not to take any action that complicates the situation in the region. Moreover, what is happening in Ayn al-Arab/Kobani is a regional and international tug-of-war in which Turkey is at odds with the other members of the coalition.

“Mission creep” is a characterization of Obama’s strategy being circulated in the corridors of diplomacy. It can also be said that this mission “sneaks,” expanding quietly and slowly: the alliance is expanding to more Western and Arab nations, air raids are expanding in geographical scope and political intent, and the mission sneaks past the minefields of domestic public opinion in America and other Western countries, which had rejected intervention in the Middle East following the wars in Iraq and Afghanistan. Now there is a legal mandate to fight ISIS in Iraq, and popular support is increasing following the group’s decapitation of hostages.

This mission sneaks between the participants’ disparate and conflicting agendas, adapting its scope and the timing of its advance and retreat. It sends reassuring signals to each party and does not provide any choice except for each party to be reassured despite their concerns. Washington benefited from a defining moment in the region: ISIS is everyone’s enemy, so there is nothing wrong with acting in concert against it. On that basis, Secretary of State John Kerry has taken up the task of forming the coalition and determining its borders.

Washington chose a moment of fear and concern for regime loyalists, when the regime and its partisans had its hands covered in blood, when cracks had emerged in the regime’s political and sectarian base following ISIS’ decapitation of regime soldiers at military sites in Raqqa in northeastern Syria. American fighter jets presented themselves as saviors and protectors against the monster of ISIS. Washington's message to the regime via Baghdad was that the United States will target only ISIS sites in northeastern Syria, and will not strike regime targets. In exchange, the regime cannot intercept any alliance aircraft, or employ radar jammers or anti-aircraft weapons. Washington will not tolerate any provocation, and the regime is not allowed to fill the void that might emerge from ISIS’ retreat.

Syrian officials vacillated between “welcoming any international effort to fight terrorism” and declaring that the regime will “respond to any aggression.” They stated that the raids are “moving in the right direction.” Do the mission’s goals, then, coincide with those of the regime itself?

Regime officials were, for a time, happy to accommodate this state of affairs. Following an emphasis of Syrian sovereignty, the regime pivoted to highlight coordination between Damascus and Washington. Currently, the “aggression” that the regime is warning against is intervention by Erdogan the “Ottoman.” Yet the official Syrian news agency SANA announces strikes carried out by coalition fighters against ISIS before the US Central Command. Syrian government reports on US raids arrive more quickly than opposition reports. For now, it seems that the Syrian government has close ties to the coalition.

Syrian officials hurried to hold meetings and conferences in which regime loyalists explained the transition from treating Washington as the spearhead of a global conspiracy to treating it as a savior, and from treating some coalition members as an integral part of that conspiracy to allowing their fighters to operate in Syrian airspace. The Baath party line is that the choice before the government was between the lesser of two evils, but that Syria is not subject to the whims of the international community, and all coalition actions require Syrian approval, even if Syria’s acceptance of coalition strikes is based on a lack of alternatives.

Under this great effort to reassure itself about this American subversion plan, the regime is concerned that it entails a long-term coalition presence in which strikes slow down to a few per day and do not deal a swift and deadly blow to ISIS. It is worried that a new political formula is being devised for the regional system, in which the coalition will maintain a low flame in Syria until Washington decides to scale up its operations and turn up the heat.

The declared aim of this strategy is to contain ISIS in Iraq and Syria. In Iraq it was necessary to abandon Maliki, allow Sunnis into the government, to support the Kurdish peshmerga, and coordinate operations between Iraqi forces, Kurdish forces and coalition aircraft. In Syria, it requires training around 15,000 Syrian fighters within three years to “fill the void” that will be left when ISIS collapses. In three years, Obama, who is preoccupied with domestic affairs and is hesitant to get involved in the Middle East, will pass the fight against ISIS to a new president from the Middle East. In the meantime, coalition aircraft will continue reconnaissance, air raids, and expanding operations on the Syrian-Turkish border. Coalition members begin their missions in Iraq, infiltrating Syrian airspace with reconnaissance flights, fighter jets, and helicopters, but thus far no ground troops.

The regime is worried that in the next phase, when the coalition concludes its strikes on ISIS’ main bases, when the strikes fail to contain this organization, and when Washington becomes convinced that it must enforce a political solution to end the war on terror, it will ramp up its operations.

America has committed itself to years of involvement. Former Secretary of Defense Leon Panetta discussed a 30-year intervention featuring a new type of alliance system, elastic goals, and persistent raids.

“I have no doubt that the final station that the coalition’s train will stop in is Syria,” said a Western official, adding, “The solution [in Syria] is political, and inspired by the Iraqi example.” The coalition claims to agree with Washington that the final destination of the “train” is a representative consensus government that ensures the participation of all of Syria’s sectarian and ethnic components. While there is no dispute over the ultimate goal, some officials and allies of Washington believe that the problem is the pace and duration of the mission in Syria, and seek to speed up the mission and widen its scope. The problem is also that Western nations believed in a number of things in the past three and a half years, including that the regime’s days were numbered, and the hope that the regime could be overthrown without international interference, since regional powers see the Syrian conflict as an existential struggle.

Some countries allied with Washington are betting that the Americans will become more and more involved. At present, the Department of Defense is publicly engaged in Syria, Congress has approved of the operation, and support for the opposition is no longer confidential and subject to the withdrawal or slowing of aid deliveries.

Allies have contradictory agendas, priorities are mismatched, and the coming stages of the mission are ambiguous. It is the task of the coalition to push certain parties to accept the alliance’s goals, to push others to be wary, and there are many questions still unanswered: What happens if regime forces bombed members of the “moderate opposition” after they return from an American training program at the end of the year? What happens if regime forces shoot down an American or coalition warplane? What if government forces “fill the void” after ISIS retreats? What if the allies discover that regime air raids have become more frequent? What if regime forces besiege Aleppo? What will members of the coalition will do if the government of Abadi withdraws its request for help in the fight against ISIS in Iraq and its “safe havens”? What happens when the allies discover that its decisions are subject to Tehran’s approval? Where are the areas between Damascus and Daraa in southern Syria in all of this? And what about Syria’s Golan front and Israel?