The kidnapping of Lebanese soldiers fed these negative feelings toward refugees, and in the videos of the captured soldiers the kidnappers danced on the future and fate of Syrian refugees in Lebanon 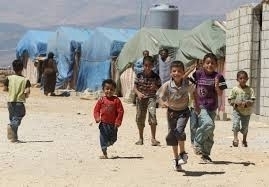 The Lebanese authorities have set a policy requiring that Syrian citizens attain a visa to enter Lebanese territory. The first consequence one thinks of is that the Lebanese government has decided to consider the more than one million Syrian refugees who have fled to Lebanon over the last three years to be residing in the country illegally.

The Lebanese authorities have often dealt with Syrian refugees as if they have come voluntarily to Lebanon. A portion of Lebanese public opinion is close to this perspective in action, sentiment, and inclination. But an essential matter in the issue of Syrian refugees to Lebanon has been set aside in discussion by Lebanese and Syrians connected to Lebanon in various degrees: that Hezbollah, a central Lebanese faction that is sharing power – if it does not hold all of it – has participated directly and definitively in the ejection of those refugees from their cities, villages, and homes in Syria. This has occurred directly. For example, in the town of Arsal, the inhabitants of the Syrian towns of Qusair and Yabroud account for roughly 80% of the refugees in the town – in total, around 130,000 people. Hezbollah took these two towns and caused their people to flee.

The word “refugee” has no effect in Lebanese policy, and the government already has protocols for dealing with Syrian migrants as tourists, merchants, and those crossing to the airport. But as for the rest of the migrants, the Lebanese authorities have required that they find a “Lebanese guarantor (kafil).” Presumably, the last category of Syrian migrants are refugees because of the ongoing war in their towns, cities, and regions. Lebanon, which has not designated them as refugees, does not want to acknowledge their ordeals. According to the government, they are coming for unknown reasons, and it is upon all Syrians to come with a Lebanese to confirm that there is a war in the country of the person he is vouching for, and that that person’s life is threatened there. Lebanon does not call them refugees no matter what the authorities have done in their country, where – according to the Syrian authorities – there is no war against Syria’s citizens, and where the matter is merely one of “a few armed groups.” Whereas the authorities in Syria are in denial of the role that they play in the prosecution of the war against their citizens, the Lebanese denial is a mix of adoption of the official Syrian position, of sectarianism, and of inertia. Lebanon’s vague and impracticable Lebanese policy came alongside a rise in tension that we have begun to feel in a variety of ways in Lebanon, and this policy will not lead to anything but more of the same. A state that cannot manage an issue the size of the logistics of importing goods through the Beirut airport will doubtlessly be unable to manage a massive and complex issue the scale of the arrival of more than one million Syrian refugees to Lebanon, constituting more than one quarter of the population.

Despite all that has been said about “Lebanese racism” toward refugees, this expression displays some oversimplification and denial of prior Lebanese experience. The state seems to be behind Lebanon’s communities in suppressing feelings and spreading hate. Until now, the response of Lebanon’s communities to Syrian refugees has been receptive, and within controlled and managed bounds, if compared with deeds that have been done with the magnitude of the phenomenon. Any society in the world that witnessed a demographic revolution on the scale of the one witnessed by Lebanon over the last four years – meaning accepting more than a quarter of its population – would have witnessed more disturbances than Lebanon has. Even if we are in a country in which the sects wake up each morning to count their members and await births from stomachs that have grown infertile, it seems that “Lebanese society” (if seems forgivable to the reader to call it a society) has made more progress than its state in dealing with the refugee issue. This was definitely the case in the first three years of the accumulation of Syrian refugees. But over the last year, we have doubtlessly begun to feel something different. We now discuss the fact that Syrians are more than a quarter of the population, and their arrival has been accompanied by their non-recognition as refugees, the refusal to establish camps to house them, a serious lack of aid supplies, and Lebanese-Lebanese and Lebanese-Syrian sectarian tension. All of these factors have given Syrian refugees a negative connotation in Lebanese consciousness, as large segments of the Lebanese workforce are in competition with their Syrian counterparts, intensifying the demand for official and UN care, and forcing refugees to attempt to find work.

ISIS has placed its weight on this already complicated issue. The kidnapping of Lebanese soldiers fed these negative feelings toward refugees, and in the videos of the captured soldiers the kidnappers danced on the future and fate of Syrian refugees in Lebanon. For their part, the Lebanese authorities benefit from their absence, and from following Hezbollah and the regime in Syria. The laws that Lebanon passes accord with the interests of the Lebanese authorities’ secret allies in Damascus and Haret Hreik.

On the one hand, “Lebanese feelings” toward refugees do not seem to take into account that Damascus is responsible for expelling its citizens from their cities and homes, and that it was helped in this task by a Lebanese group represented in the government and parliament. On the other hand, Syrian activists, who are quick to accuse the Lebanese of racism, do not want to publicize that Lebanon saw the largest rate of migration in the world (more than 25% of its population), and that strong and cohesive states like Israel changed in a fundamental and negative way when they witnessed immigration of non-refugees (Russians and Ethiopian Jews). The results of a less cohesive, less nationalistic, and more economically fatigued country witnessing greater migration are unsurprising.

In this complex context, the Lebanese government has responded with a policy that encourages tension. Though the government may be unable to implement this policy, it will also be responsible for its results, given that Syrian migration to Lebanon will not be limited if the regime in Syria does not halt its bombardment of its population. No one will be able to stop those fleeing bombardment from finding safety, and to do so would be to participate in their killing.