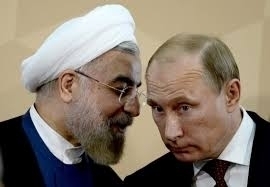 Iran has chosen a critical moment to present a "revised initiative". For the first time, Russian President Vladimir Putin threw his full weight behind the search of a solution. Moscow is spearheading diplomatic correspondences; FM Sergei Lavrov has been communicating with his peers from several countries, while deputy FM Mikhail Bogdanov travels across national capitals and calls both pro-regime figures and those in the opposition.

This is also a suitable moment concerning the U.S.-Iranian nuclear deal. Though its four-point initiative, Tehran wants to become “a part of the solution” by the time the U.S. Congress ratifies the nuclear agreement within 60 days from the date of its signature.

The concept in the works consists of two tracks: political and technical. The political track is to form a political communications group next October after the U.N. General Assembly in September and the ratification of the U.S.-Iranian nuclear deal. One suggestion is to form a group similar to P5 1, which consists of five permanent members of the U.N. Security Council and Germany, with countries in the region that are influential in Syria. Another suggestion put forward by other countries is to form a communications group of five countries including the U.S., Russia, Iran, Saudi Arabia, and Turkey, which would become a platform for mutual political understanding based upon the principle of seeking a solution to the Syrian situation and an engine for Syrians’ mutual understanding. The technical track would be supervised by U.N. special envoy Staffan de Mistura through the four committees he suggested in his report to the U.N. Security Council concerning humanitarian and security issues, ceasefire, terrorism, and a political solution to the Syrian crisis; it would become a new reference point and an alternative to the Geneva statement.

These two tracks would supposedly converge into a political agreement. It would still remain a “Syrian-led operation” even if Syrians were inspired by international dealings and agreed on the formation of a ruling regime that is capable of fighting terrorism and ISIS and of meeting the people’s aspirations.

No one has expected or demanded that every party would drop their weapons and forgo their means of pressure. Russia has sent more weapons to the Syrian Armed Forces. Iran has deployed more militias and ammunition to the National Defense Forces (NDF). The U.S. and Turkey agreed to establish a “safety zone” stretching from the west bank of the Euphrates to Marea in the Aleppo countryside and from Jarabulus to five kilometers deep into the Syrian territory, and to fight ISIS together and use Incirlik Air Base to launch raids against ISIS positions. The U.S. has also maintained a program to “train and arm” moderate opposition forces in Syria to fight ISIS under the supervision of the Department of Defense. U.S. President Barack Obama pledged to provide “defensive air cover” for the opposition forces against all parties including the Syrian regime forces. In addition, Ankara supports the Army of Conquest (Jaish al-Fatah) in its battles in the Idleb-Hama-Lattakia triangle; the group is thus approaching the regime’s sectarian stronghold, which rose against the regime after Suleiman Al-Assad, a relative of Bashar Al-Assad, killed a Syrian army officer. Jordan continues to support the Southern Front of the Free Syrian Army to control the city of Daraa and to get closer to the regime’s political stronghold. Meantime, the Syrian regime, Iran, and Hezbollah continue their battle in Zabadani while trying to change the demographics to enhance their bargaining positions by seizing land and altering the zoning of neighborhoods in Damascus and Homs.

It is indeed a proxy war; each party is trying to preserve its priorities and interests without abandoning its ambitions. Iran wants to guarantee its interests in the areas of Damascus and Tartus. Turkey hopes to prevent the establishment of a Kurdistan in northern Syria. The U.S. wants to continue its fight against ISIS. Russia wishes to protect what is left of the Syrian regime and its army, and to fight terrorism. Jordan and its allies desire protection from ISIS. A number of countries do not object to dividing Syria into federal or decentralized regions while others find the idea dangerous and insist on the unity of Syria and her people, fearing that the “virus” of division may spread under their own roof.

Public and confidential correspondences continue on diplomatic documents and telephone calls, and inside offices and airplanes. Three-way communications and meetings between officials in Moscow, Washington, and Riyadh are taking place, while Russians and Americans are talking with the Turks. As Washington widens the circle of its allies in the U.S.-Iranian nuclear deal, Gulf countries are expanding their international alliances and are strategically reaching out to the Kremlin.

Reports indicate that the meetings between Moscow and Washington and its conventional allies revealed two points that they all agree upon as well as their essential disagreement. All agree on the necessity of forming an alliance against ISIS and of seeking a political solution to the Syrian situation. However, they disagree on the way to form such an alliance and reach the political solution. Russia believes that a united national government is possible and warns that the “removal” of Bashar al-Assad would lead to “the collapse of the regime, whose void will be filled by ISIS”; therefore, Moscow is not prepared to let Assad stay in power only for a year or two during the transition. Instead, Moscow is “trying to convince the regime to form an expanded government that encompasses major political figures and blocs”. This is the goal of Russia’s correspondences with the Syrian opposition.

However, the U.S. “foresees difficulty in creating such a solution”. Washington argues that Moscow may be able to “persuade an individual or a group to accept such a solution, but the removal of Assad must be clearly stated and scheduled in order to convince the Syrian opposition to lay down their weapons.” Russians retort that discussing Assad’s removal is irresponsible and unconstitutional, and that it would lead to the collapse of the regime; Americans counter that “prolonged conflict would lead to such a collapse, which necessitates a speedy political solution”, expecting that the next stage of the Syrian situation would witness serious losses incurred by the regime without leading it to a collapse. Washington anticipates that maintaining pressure on the Syrian regime while easing the armed conflict will give the regime some leeway to keep its institutions from collapsing; as the Syrian opposition learned, this is Washington’s “plan A” without a backup plan. Both Washington and Moscow have maintained their positions so far. Nevertheless, Russia has recently begun to operate under the American radar: Putin called Obama; Russian FM Sergey Lavrov attended intense meetings with Secretary of State John Kerry. Obama sees “a glimpse of hope” that a solution may be reached for Syria because “Russia and Iran are convinced that the tides have turned against the Syrian regime.” Washington may not veto the Russian initiatives.

In the midst of these political maneuvers that conceal underlying secret communications, the Syrian regime published a statement declaring that there would be no political solution and that priority will be given to fighting terrorism, while denouncing everyone who raises a weapon as a terrorist. The regime also conceded that it does not possess enough manpower to defend the entire Syrian territory and declared that the army would defend regions of priority. The statement added that a true Syrian is one who defends Syria, not one who merely is a Syrian national and carries a Syrian passport; it also expressed the regime’s gratitude towards Iran as its “brother” and praised the performance of Hezbollah. The statement laid out the regime’s plans for its battle in Zabadani and for changing the demographics in Homs and a neighborhood in Damascus, while presenting a shrinking of the regime’s territories as an option.

Following a tripartite meeting in Doha, Iran presented an initiative calling for an immediate ceasefire, a unified and expanded national government, a constitutional amendment that guarantees the rights of ethnic minorities, and elections under international supervision. Tehran, not Damascus, presented this initiative even before Syrian FM Walid Muallem’s arrival. The Iranian initiative also seeks a “Syrian Taif Accord” and a constitution that legitimizes sectarian militias in the country. This is an attempt to present an alternative to the Geneva statement, which included discussions on forming a transitional government, because the Syrian opposition as well as countries in the Western and the Arab worlds made Iran’s acceptance of the statement a precondition of considering Iran as “a part of the solution”.

The Iranian initiative flies into the face of the Russian initiative, which emphasizes the unity of Syria and its army and adheres to the Geneva statement. Tehran describes itself as a gate that can be knocked on by any party seeking a solution. A ceasefire should begin with the legitimization of militias. Discussions on a new constitution should entail the “Lebanonization” of Syria through a “Syrian Taif Accord” including a sectarian quota system. This initiative builds upon a 10-point plan including “protecting the rights of the Sunni majority and guaranteeing the rights of the Alawite minority” that was presented earlier; it is predicated on the untested belief that the Syrian regime would be malleable to the Iranians who threw this initiative into the ocean of diplomacy. Russia responded by consenting to an international resolution to identify those responsible for the chlorine attacks in Syria, sending a message to Iran and the Syrian regime that Russia is the only door leading to Syria and Tehran is merely a window to the regime. Yes, it is a struggle between Russia and Iran over Syria – or what is left of the country.