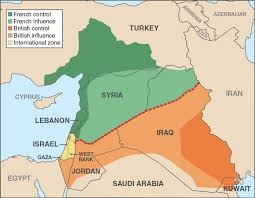 The unfolding Syrian crisis is now looking more and more like a carbon copy of the Palestinian crisis. Almost all the ‘constants’ of world powers towards the near east in the aftermath of the First World War remain unchanged. We are still living the same religious, cultural, interest-based considerations that led to the partitioning and apportionment of the near eastern territories of the Ottoman Empire under the ‘Sykes-Picot’ Agreement’ around 100 years ago. Indeed, one of the parties to the ‘agreement’, Sir Mark Sykes, was not far from the close circle behind the ‘Balfour Declaration’.

The current Syrian uprising, just like the early Palestinian uprisings of the first few decades of the 20th century, started as a spontaneous popular uprising calling for freedom, dignity and the right to self-determination. However, it soon appeared it was being surrounded by the ‘game of nations’ that has no respect for people and no regard for human rights. Gradually, thereafter, the picture was getting ever clearer in parallel with emerging disparity between the fighting forces on the ground.

The regional role of the Assad clan’s regime has been clear for all to see; it began even before Hafez al-Assad officially took over the leadership of Syria in late 1970.

The job of Hafez al-Assad, very much ‘the man of the Right’ within the Baath Arab Socialist Party, was to adopt a ‘realistic’ regional policy willing to co-exist with ‘the region’s realities’, the most prominent among which were:

2- Confronting all radical groups from the revolutionary extreme Left to the Islamist extreme Right.

3- Penetrating these groups, outbidding them after hijacking their slogans and when the need arises, resorting to murder and purges.

For eight years, Hafez al-Assad manoeuvred his way, implicitly supported by international acquiescence, peddling slogans such as “Arabism”, “Arab unity”, “secularism”, and “corrected socialism” as exportable merchandise. During those eight years he was entrusted by Henry Kissinger to destroy the Palestinian resistance movement in Lebanon and ‘control’ unruly Lebanon in the turbulent 1970s. This took place despite – or because of – Assad’s participation in the ‘October 1973 War’ (Yom Kippur War) against Israel. Later on, in 1982, world leaders looked the other way as he committed the ‘Hama Massacre’ in which he butchered between 20,000 and 40,000 people in 27 days.

In 1979, when the ‘Islamist Revolution’ led by Ayatollah Khomeini succeeded in Iran, the Assad “Arab secular” regime in Damascus was its prime supporter in the Arab world and continued to support it even when it declared its strategy of ‘exporting the (Shiite) Revolution’. Later on, when Iraq, backed by many Arab countries that were worried by Tehran’s expansionist dreams and actions, fought Iran, the ‘Baathist’ regime in Damascus sided with ‘Khomeinist’ Tehran against Baghdad’s brotherly ‘Baathist’ regime.

In spite of this stance and thanks to Hafez al-Assad’s astuteness and skills in providing strategic services to major global players whenever and wherever needed, the regime’s fortunes were not adversely affected.

Things began to change as Assad senior gradually began to loosen his grip on power which was officially transferred to the ‘second generation’ heirs within the clan in 2000. The change, however, has been conspicuous in style and approach, without any change in the basic political affinities and alliances. Out went the days of wise political dealings and finely-tuned balancing acts, and in came the style of brash exclusion and omission through murder, which accumulated mistakes and encouraged Iran to take a greater role in handling political and security matters.

The ‘series’ began with the alleged ‘suicides’ of former prime minister Mahmoud Al-Zu’bi (less than one month before Bashar al-Assad inherited the presidency). He was later followed by former senior military and intelligence strongman Gen Ghazi Kan’aan and others. Subsequently, opponents were assassinated across the borders in Lebanon, including former Lebanese prime minister Rafik Hariri; and this policy was expanded to become as strategy within and outside Syria. At this point it became impossible to decide where crucial political decisions were being taken – in Damascus or Tehran?

The situation in Lebanon has been the best marker for what has been going on in Syria. The so called ‘Syrian-Lebanese security apparatus’ which was effectively running Lebanon behind the façade of a president who controlled nothing oversaw the creation of the de facto ‘state’ of Hezbollah which is a branch of Iran’s Revolutionary Guards (IRGC). Today Hezbollah is the real ‘state’ that is much more powerful than what has become of the Lebanese ‘statelet’.

Proof, if proof is needed, is Lebanon’s refusal to condemn the attack on Saudi Arabia’s embassy in Tehran at both the Arab Foreign Ministers’ meeting and the Organization of Islamic Cooperation (OIC) Foreign Ministers Council’s meeting that discussed the issue. Hezbollah’s preventing the election of a president for more than a year and a half, forcing the Lebanese government to release a former cabinet minister already convicted based on his recorded confession that he was planning a series of murderous explosions to cause sectarian turmoil, and the failure of the government to prevent Hezbollah from engaging in wars outside Lebanon are other forms of proof.

Pressure exerted on the Syrian opposition which is already encountering Iranian land occupation, Russian aerial bombardment and ISIS terrorism, gives credence to Seymour Hersh’s report about the joint efforts of the Joint Chiefs of Staff and the US Defence Intelligence Agency with Russian, Israeli and German intelligence services to defend the Bashar al-Assad regime. Today, Washington has fully adopted Moscow’s position towards Syria; in fact some voices from the Israeli intelligence community throughout 2015 have followed the same line.

Furthermore, American active collaboration with secessionist Kurdish groups in northern Syria, along the borders with Turkey, gives the impression that despite Vice President Joe Biden’s ‘grey’ talk , Washington is truly working for an independent Kurdish state in the near east. An Israeli lawmaker, actually, said the other day “The Kurds deserve a state of their own”!

Back in Lebanon, it is worth recalling that the Maronite Patriarch Bechara Rai was the first prominent figure that candidly expressed his reservations about the Syrian uprising by saying several times both in Lebanon and during his visits abroad, beginning with France, what amounts to “Assad may be a bad guy, but what the uprising might give is a worse alternative”. This precisely reflects the climate created by the ‘alliance of minorities’ mentality in the near east. It was in the very heart of the political thinking of those who conjured up the Anglo – French mandates and the ‘religious homelands’ starting with Israel.

Unfortunately, before the partition maps could be enforced, this ‘alliance of minorities’ (i.e. non-Sunni Arabs) was missing nothing but the creation of ISIS and the JCPOA (the American – Iranian nuclear agreement) which makes the Vali-e-Faqih and his Revolutionary Guards the instigators of the grand Muslim – Muslim civil war.