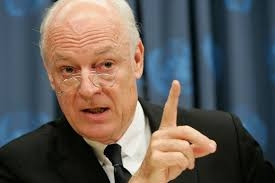 The UN special envoy for Syria Staffan de Mistura said that the fate of Bashar al-Assad will be determined by the Syrians and not foreigners. In an interview with TV channel France 24, he said “Can’t we leave the Syrians to actually decide on that? Why should we be saying in advance what the Syrians should say, as long as they have the freedom and the opportunity of saying so?” Who is de Mistura referring to?

Certainly, he meant the Saudis, Americans and the Europeans who say that there is no place for Assad in any political transition process. However, are de Mistura’s comments acceptable in principle and considering the circumstances? Yes, certainly, and his statements are incredibly rational. De Mistura must name these “foreigners” and demand that they leave the Syrians alone to decide their fate! Will he dare to? I dare him!

It is clear that de Mistura is talking about those who defend the Syrians and not those who defend the criminal of Damascus, Assad. There is not a single soldier in Syria who belongs to the armies of countries defending the Syrians, of which around 400,000 have been murdered at the hands of Assad. In Syria, the Russian air force, terrorist Hezbollah militias, other Shiite militias and fighters from Iran are all defending Assad and killing and torturing the Syrians.

So, does de Mistura intend Arab and Western support for the moderate Syrian opposition? Everybody knows, and the facts say, that this support did not begin until Assad started to use violence and began his killing machine which claimed and is claiming the lives of innocent Syrians who peacefully demonstrated.

It is assumed that de Mistura, who has visited and visits Damascus, knows that the Syrian capital is now under the protection of Iranian forces, that the skies there are under the protection of Russia and all of this is in defence of Assad who has killed 400,000 Syrians. What foreigners is the international envoy talking about? Would Assad be able to stay in Damascus for an hour without Iranian and Russian support? Would Assad have survived until now without Iranian militias and some mercenaries in order for de Mistura to demand that “foreigners” leave the Syrians alone to decide their fate? Certainly not, and this is why what de Mistura is saying is really astounding!

If the UN envoy wants to know what the Syrians want, the answer is the departure of Assad, for Iran and Russia to stop intervening in the Syrian Arab Republic because they are the foreigners, not the Arabs. De Mistura must publicly demand that the Russians and Iranians vacate Syria and leave its inhabitants alone — and the matter does not stop there. De Mistura must also aspire to uphold international law which he represents; take a tough stance against Assad and his Russian and Iranian partners killing Syrian civilians and demand that Assad be internationally punished for using chemical weapons at different stages and even after the Russian-brokered agreement for Assad to surrender his chemical weapons was made. De Mistura must do all of this — it is his job. He should do his job instead of making vague statements that are nothing but pro-Assad.