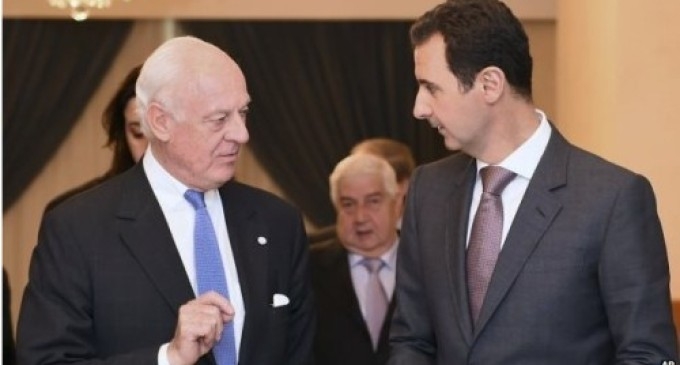 The Syrian government and opposition were informed by their allies about the need to go to Geneva ready to negotiate about “material issues”, starting with the formation of a “representative, non-sectarian government,” amid signs of the appearance of fissures between Moscow and Damascus. This coincides with the emergence of a flexible position by Russia represented by placing Nusra Front in a grey area in order to make room for its Syrian members to join the truce alongside continuing work with America to develop the “cessation of hostilities” into a permanent ceasefire.

According to reports, the opposition High Negotiations Committee received “advice” from its allies urging it not to hold an emergency meeting to discuss the decision to participate in the negotiations, but rather to go to Geneva and discuss the issue, and the subject of the composition of the negotiating delegation, near the United Nations headquarters.

A number of attitudes had emerged among the 30 members of the High Committee, which may be summarized by two outlooks: First, to refuse to go to Geneva until the violations of the truce reach zero, the blockades are lifted on the besieged areas, and the composition of the negotiating delegation headed by General Asaad al-Zouabi is adhered to, with Army of Islam representative Mohammed Alloush remaining the chief negotiator. Included in this attitude are the representatives of the armed factions and members of the Syrian National Coalition, expressed by the general coordinator for the Committee, Riad Hijab.

The second attitude – among independents, members of the National Coordination Body, and some Coalition members – calls for a change in the composition of the delegation to include experts specialized in negotiations and that problematic personalities “step down,” in order to go to Geneva to enter material talks on the basis of documents connected to a new constitution and working toward the formation of a transitional ruling authority with full powers in accordance with the “Geneva declaration.”

Ahead of this scene, the members of the High Committee received advice that they should go to Geneva before Monday, while the Russian Foreign Ministry also gave “advice” to Damascus that a delegation headed by ambassador Bashar al-Jaafari should go ready to enter material negotiations to implement Resolution 2254. The opposition had reservations about the membership of a security officer who had links to military operations in Douma (Eastern Ghouta), but the United Nations was not informed of any changes in the opposition and government delegations. It is expected that these issues will be among the points which Syrian Foreign Minister Walid al-Muallem will speak about in Damascus shortly.

The international envoy Staffan de Mistura is betting that within 10 days of being in Geneva, the government delegation and the delegation of the High Committee, opposition and civilian personalities will arrive at a discussion of the three articles of the agenda, which are: “The authority, the new constitution, and parliamentary and presidential elections within 18 months.” It seems clear that Damascus’s position is clear on the first two points, in that it wants a “national unity government” including opposition personalities, in addition to changing the current constitution in accordance with additions the delegation is bringing to Geneva.

Here emerges the disagreement with Moscow, which sees a need to widen the horizon to be broader than a “unity government” and to go to announce principles of the constitution. In the past few days it held secret meetings to discuss different formulas for announcing a compromise between the regime’s proposal to preserve the constitution of 2012 and the opposition’s insistence on a new constitution. The Russian military base in Lattakia meanwhile began to host opposition members acceptable to the regime, and discussed constitutional reform and a political solution.

Another disagreement meanwhile emerged between Moscow and Damascus, connected with the parliamentary elections scheduled for the 13th of next month. While Damascus views this as being within Syria’s constitutional framework, the Russians view it as contradicting the proposed “roadmap” in Resolution 2254, whereby the issue of parliamentary and presidential elections is subject to agreement between the regime and the opposition. But Moscow has not yet reached the level of making its annoyance with Damascus’s decision apparent to the public.

On the other side, the High Committee is insisting on the principle of forming a “transitional authority,” but rifts have appeared between its parties. While its spokesman Salim al-Muslat saw something positive in de Mistura’s proposal of an agenda including the formation of a “representative government,” the Coalition took another position. It said in a statement to those responsible that de Mistura’s statements on “forming a national unity government in Syria” are a “political coup against all the negotiating terms of reference,” noting that “the Geneva declaration is explicit about the formation of a fully-empowered transitional governing authority including opposition representatives and personalities from the regime not implicated in the killing.”

In parallel to that, the slow advance continued on the issue of humanitarian assistance, as Jan Egeland, who heads the international working team, said that the United Nations delivered aid to 10 of 18 besieged areas in Syria over the last four weeks, and is working to overcome the obstacles in its deliveries to the remaining areas. But international complaints remain about the slowness of granting aid to the United Nations convoys, and that Damascus has reduced the number of parties who must sign the orders, or that it has tried to “drown” the United Nations in approvals exceeding their executive capacities.

The city of Daraya in southwest Damascus has emerged as a symbolic issue. Despite de Mistura’s announcement that the aid convoys will enter it, this advance did not occur, and instead it was subjected to heavy shelling and barrel bombs. Muslat, who noted a decrease in the breaches of the truce, said that the siege must be lifted on Daraya because this “is not a condition, but will pave the way for the beginning of talks.”

On the military side, the Americans, Russians and the United Nations are pushing toward developing a “cessation of military actions” while the three parties late last week held a meeting of the working group with the attendance of representatives of the countries of the International Syria Support Group. Western countries pushed for the development of a monitoring mechanism for the agreements, in addition to developing a mechanism to resolve the breaches which are occurring. While the Western countries proposed an “American-Russian mechanism” to resolve any violation, it seems that Moscow required coordination between the American and Russian armies to form this mechanism, an issue which Washington would prefer not to arrive at. Meanwhile Russia made it a priority to cut northern Syria off from Turkey to stop reinforcements to the opposition.